Advertisement
The Newspaper for the Future of Miami
Connect with us:
Front Page » Top Stories » Relief for traffic jams when Brickell Bridge opens 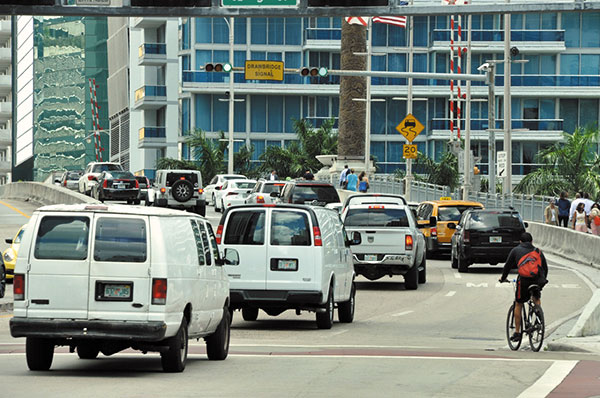 Some relief for traffic jams when the Brickell Bridge opens may be ahead, Downtown Development Authority directors have heard.
Chair Ken Russell, a Miami commissioner, met with Jim Wolfe, Florida Department of Transportation District 6 head, to review a list of problems with the bridge, including alleged improper openings that paralyze downtown, especially during rush hours.
The authority wants current restrictions enforced and would prefer to lengthen rush hour periods when the bridge could not be opened.
The bridge is supposed to be locked down (except for vessel emergencies) between 7:35 and 8:59 a.m., 12:05 and 12:59 p.m., and 4:35 and 5:59 p.m. weekdays. The new rules would extend the morning and evening lockdowns until 9:30 a.m. and 6:30 p.m. respectively.
But when authority board member Richard Lydecker’s law firm analyzed bridge logs pro bono, openings were frequent during restricted hours, mostly for pleasure craft.
Mr. Wolfe was very receptive to several items on the authority’s list, and agreed to evaluate “the low-hanging fruit, including opening times and pedestrian crossings. They’re on the side with us,” Mr. Russell said Friday.
The transportation secretary also agreed that time-stamped photos and digital readings should replace today’s bridge logs scrawled in pencil by the bridge tender, he said.
“Could there be a technical issue with the bridge?” asked authority board member Alan Ojeda, president of Rilea Development Group. “You see a little boat go under, and by the time the bridge is lowered back down again, that boat is already in the Bahamas. Those minutes all add up.”
He suggested someone look at whether the technology that raises and lowers the bridge is defective or could be improved.
Meanwhile, Mr. Russell called the meeting with Mr. Wolfe, “very effective. We’ve got a good plan moving forward.”