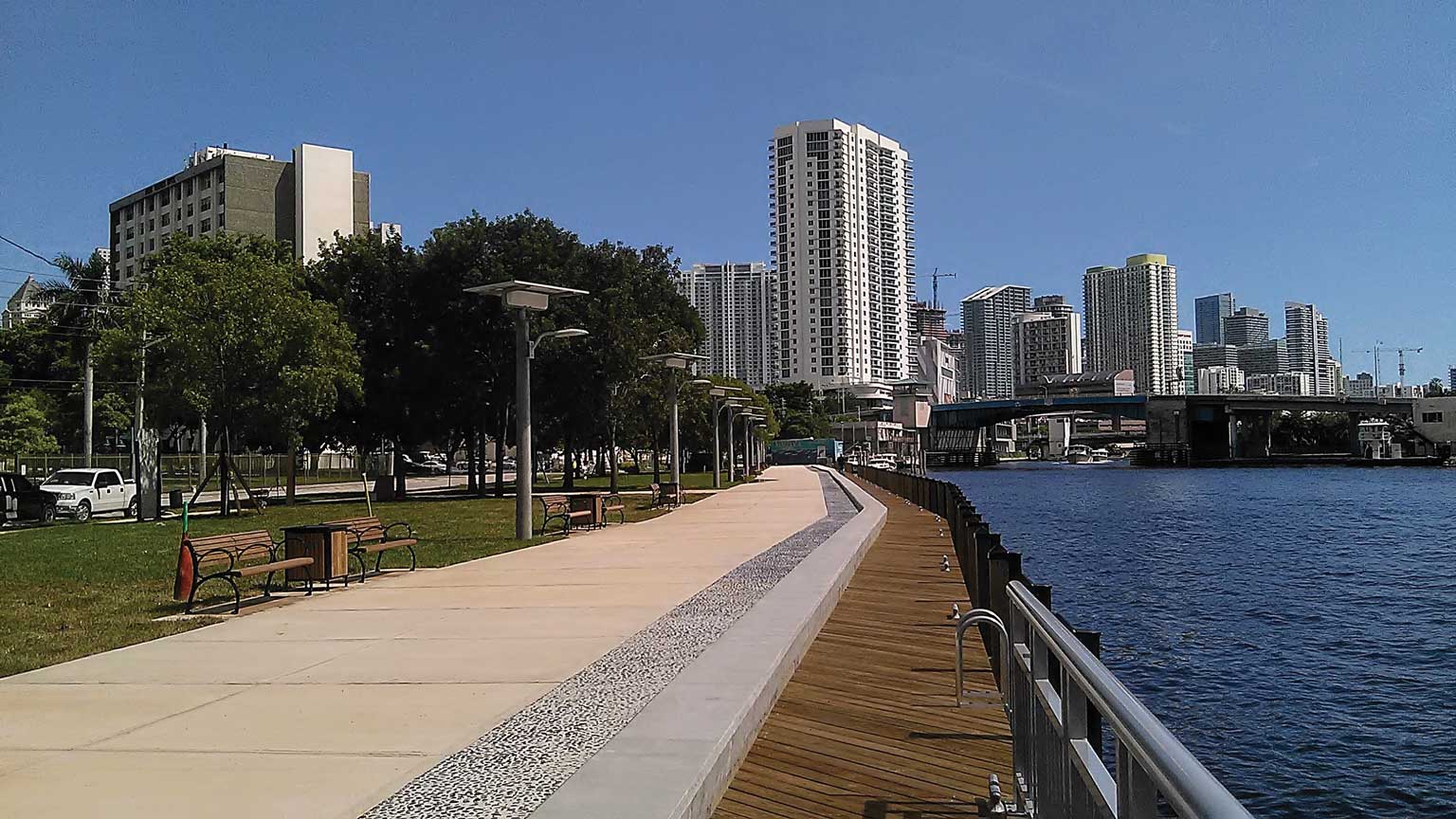 The Miami River Commission is backing a proposed amendment to the city’s zoning code, Miami 21, that would clarify the extent of rules on waterfront setbacks and public walkways.
For many years, the city charter and city code have required that development on most waterfront property include a 50-foot setback and 25-foot public walkway.
On Biscayne Bay it’s called the baywalk or bayline. On the Miami River, the walkway is the riverwalk.
River commission officials said they were surprised by a “shocking” interpretation issued by the city’s zoning administrator last fall that removes the City of Miami zoning code’s waterfront building setbacks, view corridor setbacks and public riverwalk requirements along the river west of the Fifth Street Bridge.
River commission Chairman Horacio Stuart Aguirre and Executive Director Brett Bibeau reported the matter to the commission in November 2016.
The river commission unanimously agreed to appeal the zoning interpretation and began work with city officials toward amending or reversing the interpretation, in order for the code’s legal requirements for waterfront walkways, building setbacks and view corridors to remain in place for the entire Miami River and all connecting waterways.
The zoning administrator was apparently citing a charter amendment, approved by voters in 1979, requiring that all future development along the bay and along both banks of the river below the Fifth Street Bridge be placed 50 feet from the water’s edge.
But Miami 21, effective in May 2010, says, in part: “In addition to the Miami City Charter requirements, the following setback, walkways, and waterfront standards shall apply to all waterfront properties within the City of Miami…”
Ever since this was brought to the zoning administrator’s attention, river commission and city officials have been working on language to add to the waterfront standards in Miami 21.
The river commission in March supported adoption of a proposed amendment that clearly defines the area.
The amendment would add to the waterfront standards section of Miami 21: “…waterfront properties are defined as properties abutting Biscayne Bay, the Miami River from Biscayne Bay to the Miami River’s salinity dam, and the Miami River’s tributaries including Seybold Canal from Miami River to its terminus, South Fork from Miami River to the South Fork’s salinity dam, North Fork from Miami River to North Fork’s terminus, and Tamiami Canal from Miami River to Tamiami Canal’s salinity dam.”
To become part of Miami 21, the city commission must approve this proposed amendment.
The river commission, City Manager’s Office, the mayor and city commissioners have all championed the waterfront setback rules and need for public access to the water, and fought for extending the growing baywalk and riverwalk.
The city itself has spent big money to construct improved public walkways and dockage on portions of the bay and the river owned by the city.
One of the city’s latest projects is the revamping of Lummus Park on the river, which includes an expansive riverwalk and dock system.