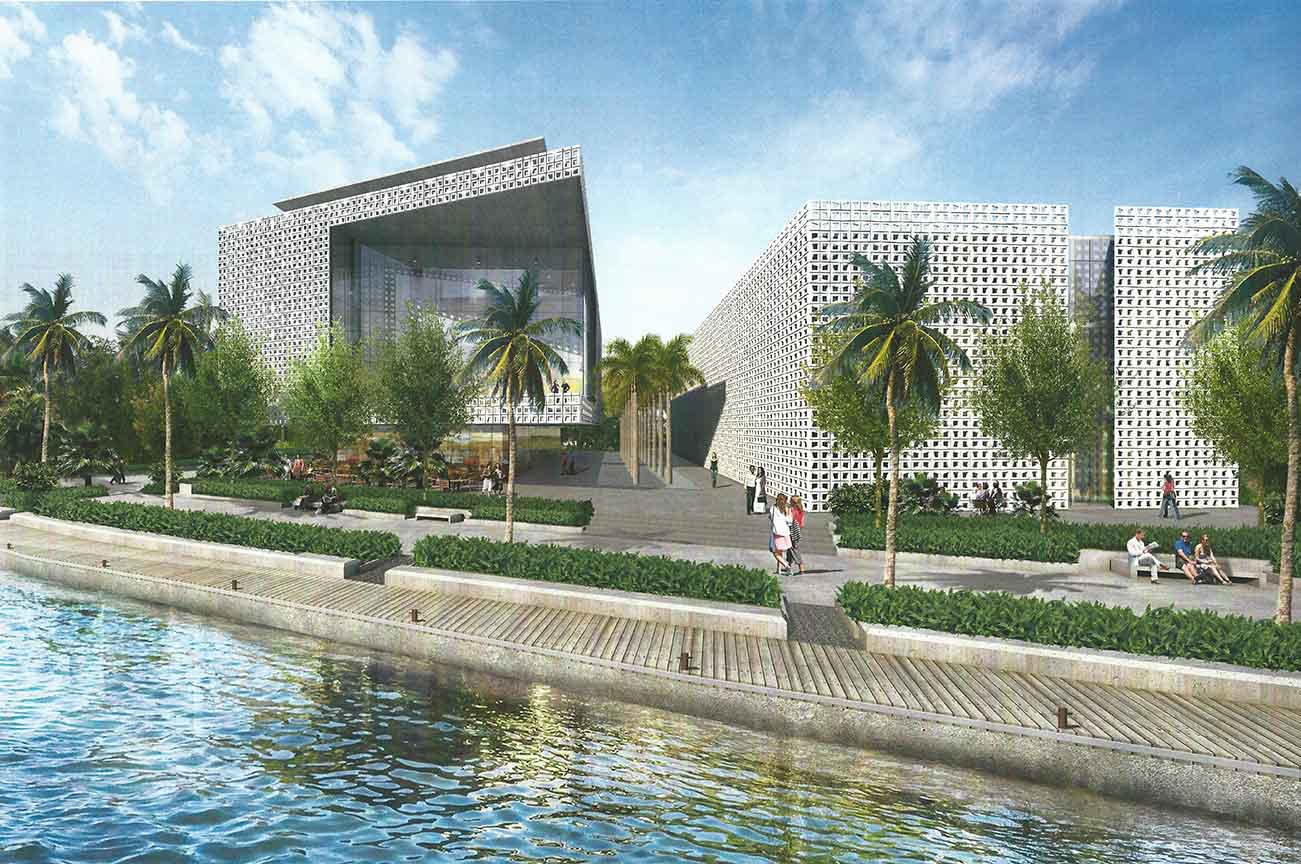 A New York fashion designer building a design studio on the Miami River is expanding his concept with plans to establish a vocational school of fashion there too.
Naeem Khan plans a studio for design and manufacture at county-owned 1175 NW South River Drive under his long-term lease with Miami-Dade.
A Miami River Commission vote Monday recommended revisions to his plan for approval.
Mr. Khan and his team presented the latest changes to the evolving plan, which now includes a vocational school.
“I had a crazy idea, but a good idea,” he told the board. As the project became more defined, Mr. Khan said, he began to wonder how to include the community.
The idea of the school was born, he said, to help teach a new generation the art of fashion design and the workings of the fashion industry.
The site fronts more than 200 feet of the river’s south shore. Dockage is planned for the entire length, along with a 25-foot-wide riverwalk.
Mr. Khan’s team has promised to extend the riverwalk under the 12th Avenue Bridge, connecting with a pedestrian staircase on the west leading back to the on-road Miami River Greenway. The riverwalk is also to have access back to the road on the east.
Mr. Khan’s team reported negotiations have begun with the Florida Department of Transportation, which owns the bridge and the land under it, and the City of Miami Department of Fire-Rescue, which uses the space to store old and wrecked fire and rescue vehicles.
The revised plan for Naeem Khan Studio includes cleaning and improving the adjacent land under the bridge to use for his facility’s parking.
Project architect Alfonso Jurado of Arquitectonica reviewed other changes to the site plan, stressing that none impact the riverwalk.
The original plan had two buildings, 3 and 4 stories, joined by a connector. The revised plan includes separate 3-story and 5-story structures. The 3-story building, to the west adjacent to the bridge, would house the vocational school, according to documents. The 5-story building would be the fashion design and manufacturing facility, with the top floor devoted to a client lounge and offices. The taller building is 68 feet, 9 inches.
“We took the connector out and improved the quality of the space between the buildings,” Mr. Jurado said.
The revised site plan shows an open green area between the buildings that could host fashion runway shows, he noted.
“It will be very high end. We’re making the whole area as beautiful as we can,” Mr. Khan said.
The redesign of the buildings involves more dramatic and sharp angles, with “substantial changes to the skin,” Mr. Jurado said. Precast panels and glass make up the grid façade, which “harkens back to the ’50s in Miami,” he said.
River commission member Patty Harris commended Mr. Khan. “It’s a lovely place – bright, open, airy,” she said.
The plan includes an improved seawall, with fabrics shipped to the site and finished fashion products shipped out via the river.
County Commissioner Bruno A. Barreiro, a river commission member, said he worked with Mr. Khan to bring his business to Miami.
“What I like about the building is that the lobby is facing the water,” Mr. Barreiro said.
Mr. Khan said he hopes to finish construction by mid-2019.