Advertisement
The Newspaper for the Future of Miami
Connect with us:
Front Page » Real Estate » Miami OKs 838 rentals in two Midtown towers 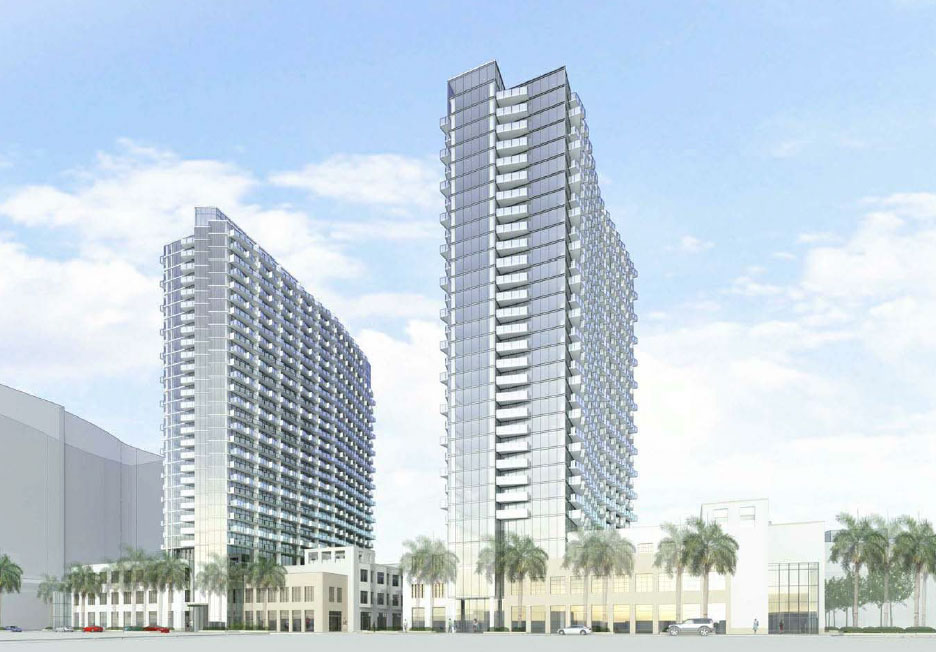 Miami city commissioners succeeded in getting a local workforce commitment and a contribution to the affordable housing fund from a Midtown developer poised to bring two more towers to the bustling new community.
Midtown 6 and 7 are twin mixed-use projects sharing a common courtyard and a narrow pedestrian plaza, or “mews.”
Together the towers will provide 838 market rate apartments along with retail and offices and garages with room to park 1,106 cars.
Midtown Opportunities VB LLC and Midtown Opportunities IVR LLC requested a Major Use Special Permit for Midtown 6 at 3101 NE First Ave. to allow a development with more than 400 dwellings; and a Class II Permit for Midtown 7 at 3001 NE First Ave. to allow new construction; and two subordinate Class II permits for both Midtown 6 and Midtown 7 to provide tandem loading berths and allow for the maneuvering of trucks within the public right of way for off-street loading, and approval of a height increase of up to 10% for both towers.
The planning and zoning staff and the Planning, Zoning and Appeals Board recommended approval.
The commission approved all the permits unanimously Feb. 23.
Commissioner Frank Carollo fought for a requirement that the developer hire local workers, monitored regularly by an independent third party, with fines for not maintaining hiring percentages. The developer must hire 40% of workers from Miami-Dade County. Of that number, 25% must live in the City of Miami.
The developer also agreed to pay $230,000 into the city’s affordable housing trust fund – $115,000 for each building due when the building permit is issued.
The matter was in limbo awhile at the meeting, tabled as lawyers for the developer and city worked out details.
Edward Martos, an attorney for the developer, thanked commissioners for settling the matter.
Commissioner Ken Russell said, “It makes a good project better.”
“I agree,” Mr. Martos responded.
Midtown 6 will have 31 stories with 442,372 square feet of floor area including 447 apartments, 39,718 square feet of commercial space, 1,820 square feet of offices, residential amenities, and a 601-space garage.
Midtown 7 will be 31 stories with 386,779 square feet of floor area including 391 apartments, 30,709 square feet for commercial use, 2,397 square feet of offices, residential amenities, and a 505-space garage.
Midtown 6 and 7 are bounded on the east by East Coast Avenue, on the north by Northeast 32nd Street, on the west by Northeast First Avenue and on the south by Northeast 30th Street, two of the last undeveloped parcels in Midtown.
“The project helps fulfill the promise of Midtown,” Mr. Martos told commissioners.
Midtown was envisioned years ago to revitalize a former rail yard, and his clients are playing a major role in seeing that vision realized, Mr. Martos said.
Architect Grace Ames of bKL Architecture said the towers will bring in shops, cafes, restaurants and a grocery store.
Mr. Carollo commended designers on the look of the towers, calling them “very pleasing to the eye.”
Commissioner Francis Suarez said Midtown has been transformed into a vibrant area, growing from a “wasteland” of stacked storage containers into a well-planned, self-contained city.