Advertisement
The Newspaper for the Future of Miami
Connect with us:
Front Page » Transportation » Local highways to get first diverging diamond interchanges 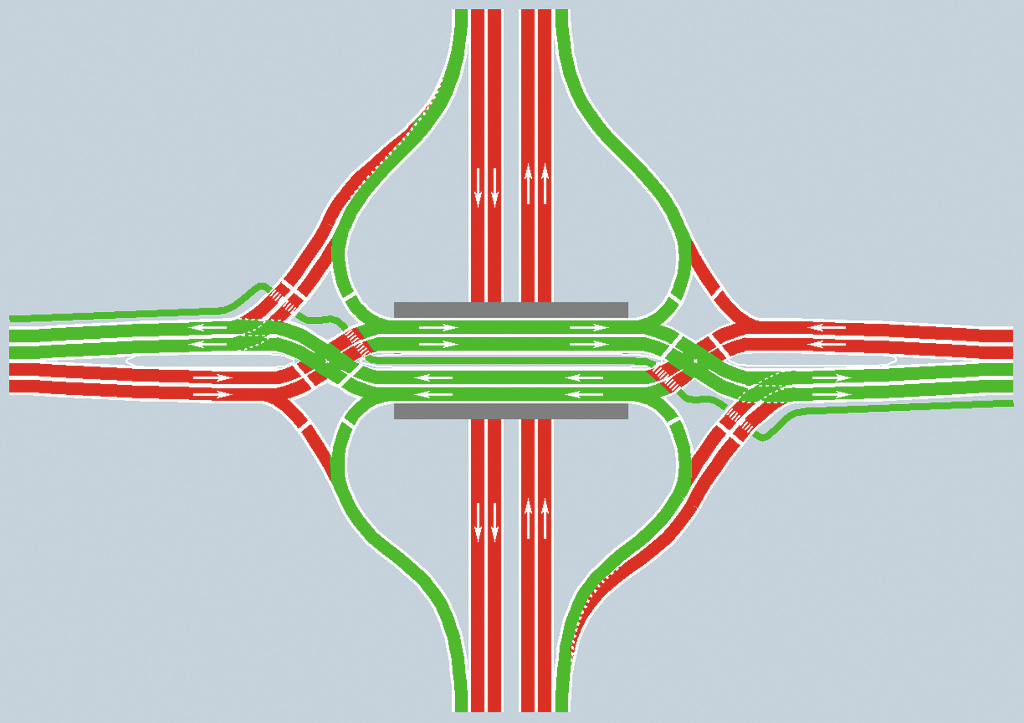 Work is steadily moving forward to make driving on area highways less time-consuming and safer.
“Two major things right now are the diverging diamond interchanges and the work on the shoulders of 836 to prepare them for express buses,” said Yvette Holt, a spokesperson for the Miami-Dade Expressway Authority (MDX).
Both are part of a State Road 836 modernization program that is expected to be completed in 2018, she added.
Improvements to that roadway (also called the Dolphin Expressway) include adding a lane between Northwest 17th and 57th avenues and safety improvements along the corridor to eliminate exits on the left.
Diverging diamond interchanges will be added to the intersections of Northwest 27th and 57th avenues. The interchanges, the first in South Florida, briefly shift traffic to the left and then back to the right, eliminating the need for left turns across oncoming traffic and helping prevent traffic conflicts, Ms. Holt said. “They also allow through traffic to keep moving,” she said. The new interchanges will be in place by this summer, she added.
The intersection at Northwest 42nd Avenue (LeJeune Road) will also be rebuilt to eliminate a left exit and improve the traffic flow, she said.
The Northwest 87th Avenue interchange will be decongested with the addition of lanes at Northwest 12th Street, along with an additional entrance and exits at Northwest 84th Avenue.
Perhaps the most impactful for anyone who drives near the Health District is a $23 million joint venture between MDX and the Florida Department of Transportation aimed at eliminating a notorious and dangerous bottleneck.
Eastbound motorists getting on State Road 836 at Northwest 12th or 17th avenues who want to drive north on I-95 now have to cross several lanes of traffic, as they enter on the extreme right and the I-95 entrance is on the extreme left. Then they face a backup as they approach the entrance to I-95 north.
The joint venture will add a dedicated ramp on the right side of eastbound State Road 836 that will lead directly to the northbound I-95 entrance. “These improvements will eliminate the need to weave through three lanes of traffic from Northwest 12th Avenue to go north on I-95,” said Mario Diaz, an MDX spokesperson.
“As part of the 836 modernization, we’re also strengthening the inside shoulders,” Ms. Holt said. “When traffic is moving at speeds lower than 30 miles per hour, the buses can travel on the shoulder” from the new Dolphin Park & Ride facility to downtown Miami.
MDX was the lead agency in the planning, design and construction of the park and ride station on 15 publicly owned acres north of Northwest 12th Street, just west of the Florida Turnpike.
The expressway authority will also extend State Road 874 to Southwest 128 Street. “This will provide a new entrance and exit to the expressway system for the region and help decongest the surrounding streets as motorist try to access the Florida Turnpike via Southwest 152nd Street and Southwest 120th Street,” Mr. Diaz said last year.
In a move that will vex some drivers but aims to keep all safer, the Florida Department of Transportation has just completed installation of 16,565 new plastic poles separating the I-95 express lanes from the rest of traffic. The poles, which the agency says are stronger than their predecessors, are also placed closer together
“This will increase safety for our road users by better separating the lanes and will discourage the practice of lane diving (crashing through poles to get in or out of the express lanes),” said a transportation department release.
In downtown Miami, the department is rehabilitating the bridge from I-95 northbound to Southeast Second Avenue. It will take roughly eight months, according to the transportation department’s website, and will include restoring damaged concrete on bridge columns and beams, cleaning and painting a concrete barrier wall, rehabilitating bridge joints and the bridge deck, and cleaning and painting the steel bridge structures.
Improvements to Flagler Street from Southwest/Northwest 14th to 27th avenues are ongoing, with a scheduled completion date of November. New storm drains will be added, along with new lighting, traffic signals, sidewalks, pedestrian ramps, pavement markings and an exclusive bicycle lane.
From Southwest/Northwest 27th to 75th avenues along Flagler Street, the transportation department will repave and restripe the roadway, rebuild pedestrian curb ramps, install warning lights at crosswalks and make minor storm water drainage improvements.
On Southwest First Street from Sixth to 17th avenues, the department will add new storm drains, rebuild the roadway, install new lighting, traffic signals and pavement markings, create a shared use/bicycle lane, and build new sidewalks and pedestrian ramps.