Advertisement
The Newspaper for the Future of Miami
Connect with us:
Front Page » Communities » Coconut Grove waterfront about to add another major project

Coconut Grove waterfront about to add another major project 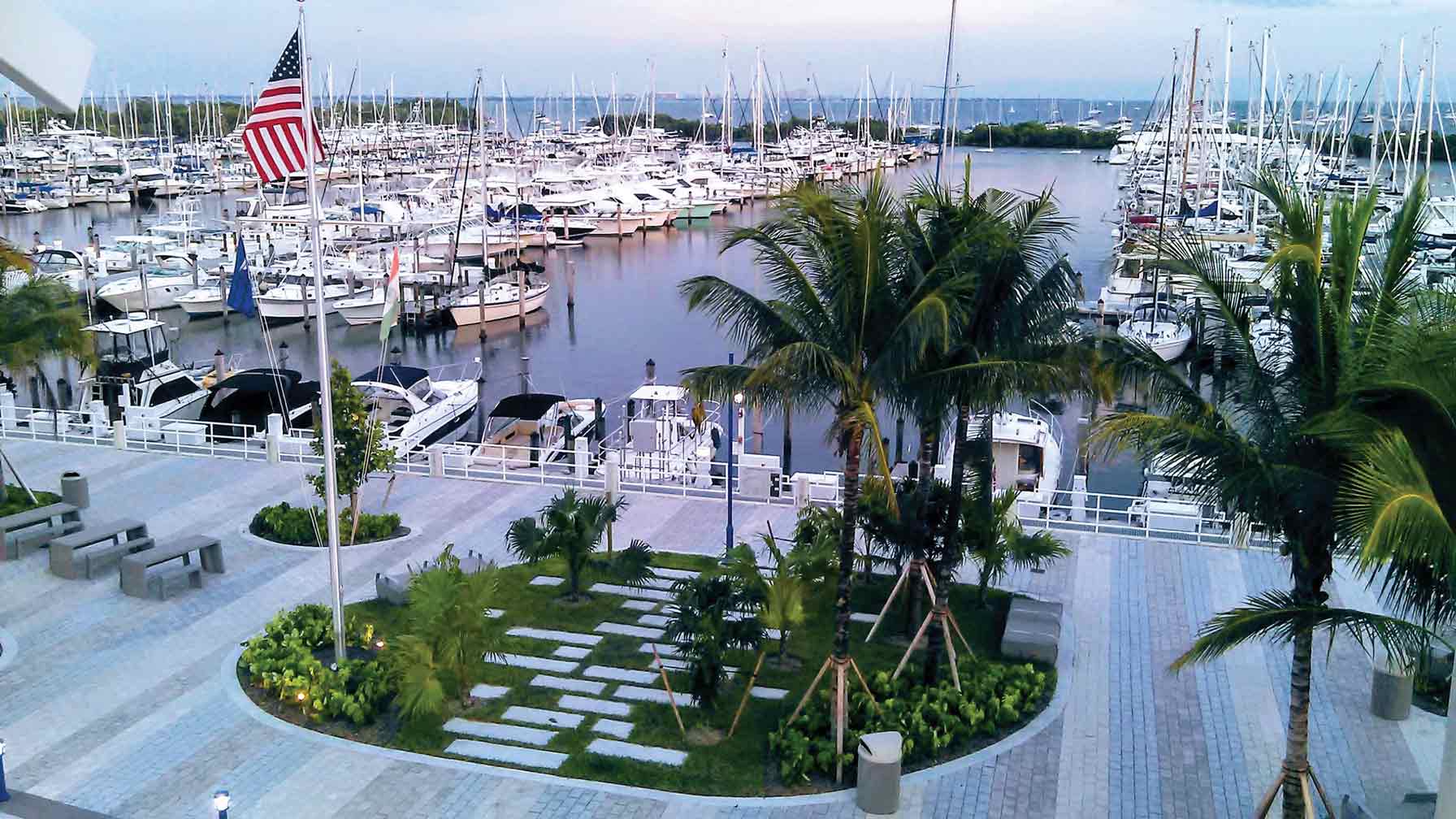 Along the Coconut Grove waterfront, the only constant is change.
Significant changes continue to evolve where the mainland meets Biscayne Bay, anchored centrally by historic Miami City Hall.
For the last three years, cranes and cement trucks have been major players in the transformation of the waterfront.
In the last 12 months alone, the area has seen construction of a waterfront plaza, two expansive new parking lots to serve multiple areas and uses, and additional accents to the new Regatta Park.
Exactly one year ago, the area between the new multi-million-dollar dockmaster building and the water’s edge was a expanse of dirt, broken concrete, rocks and twisted steel – covering the demolished remnants of the old one-story dockmaster’s office that fronted Dinner Key Marina.
Finishing work on the waterfront project included completion of the 10,180-square-foot outdoor plaza, tying nicely together the city-owned marina and the new dockmaster building.
The three-story baby blue structure now serves as the Dinner Key Marina and Harbormaster’s (Mooring) administration building.
The project had a price tag of more than $4.5 million.
The building looks out over the city’s 582-slip flagship marina, Dinner Key Marina, the largest wet slip marine facility in the state.
The marina offers concrete docks/wooden finger piers, electric connections and Internet access, laundry facilities and pump-out service, 24-hour staff and security, fishing charters and more.
In addition, the city’s 225-vessel mooring facility lies just offshore.
And nearby, paid parking for hundreds of vehicles has come to the waterfront, in two joined lots.
The new parking lots were paved, painted and landscaped, and much of the space is devoted to PayByPhone parking, employing an online application to pay for parking. The Miami Parking Authority operates the new paid parking areas.
Signs give notice that parking is now paid parking, except on days of Miami City Commission meetings at City Hall.
In the parking lot closest to the new dockmaster building, several rows are reserved for Dinner Key Marina users and guests, requiring paid and displayed parking permits.
Also in the past year, work was completed on the service road connecting Pan American Drive with the end of Southwest 27th Avenue. The roadway was outfitted with fold-back barricades so it can be used as a staging area for events tried to Regatta Park and the marina.
The park itself has lived up to its name and beyond by hosting many water-related events, including regattas.
In the coming months and years, the land north and east of City Hall will be transformed, and the process has already begun.
In November 2015, the city and the parking authority approved agreements with Grove Bay Investment Group LLC to develop the city-owned land there.
Grove Bay’s project, called The Harbour, is to include new restaurants and retail, redeveloping a marina, improvements to the public baywalk, and a brand new parking garage.
The garage will be built, owned and managed by the parking authority, with Grove Bay paying for part of the construction.
Site clearing work has begun on the land that will house the new garage, at Pan American Drive and South Bayshore Drive.
However, construction on the garage has been delayed.
In December, the parking authority – through the city’s Off-Street Parking Board – rejected all bids for construction of the garage after they came in more than double the estimated cost.
The garage is planned at three stories for 333 vehicles and ground floor retail uses.
The building is currently being designed to help cut overall construction costs.
At a Feb. 1 meeting, authority CEO Art Noriega told the parking board the modifications to the design are being finalized. Once completed, he said, the project will be re-bid.
Mr. Noriega said the site clearing work, and relocation of a water main on the site, have been suspended and will not resume until after the Coconut Grove Arts Festival, Feb. 18-20.