Advertisement
The Newspaper for the Future of Miami
Connect with us:
Front Page » Arts & Culture » Coral Gables sculptures win the battle of tastes 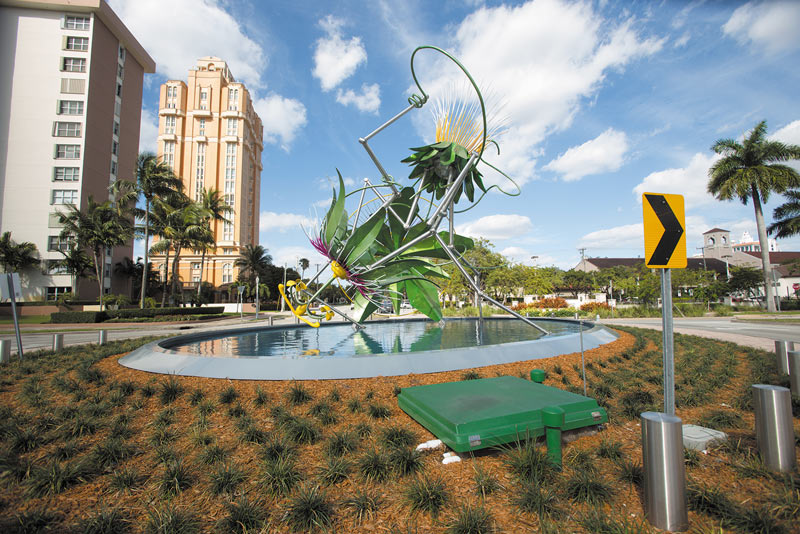 Neighbors who wanted two modern-art sculptures moved out of traffic circles on Segovia Street in Coral Gables lost their battle last week when leaders refused to place the issue on the April citywide ballot.

Commissioner Jeannett Slesnick said she has been repeatedly contacted by people who don’t like the Alice Aycock passionflower-inspired sculptures or who objected to their placement at Biltmore Way and Coral Way. A petition drive mustered only 1,174 signatures; 6,133 were required to add the item to the ballot.

During Art Basel, “people came from all around the world to see the sculptures,” said Nina Burgos, a member of the city’s Cultural Development Board. “We want more art to come here. A situation such as this needs to be resolved so we can move forward and have these international works in our city.”

Ms. Aycock, she said, has a stellar reputation and her works have been displayed on Park Avenue in New York City, among other cities.

Residents who spoke said they respect the artist and her work but that the metal sculptures are not in context for the city.

“It’s all about the money,” said resident John Davis, “$1 million to decorate a traffic circle. This does nothing to produce clean air, help the traffic flow, prevent crime or do anything for our health, welfare and lifestyle other than to look nice.”

Some residents pointed out that the city must approve the colors they paint their houses and has other restrictions meant to protect the city’s aesthetics and Mediterranean flavor. Some also said the sculptures are distracting to drivers, particularly the larger of the two, on Biltmore Way.

“We took a look at the traffic from June to November, and accidents were roughly half of what they were when the sculpture wasn’t there,” said Mayor James Cason. The sculptures were funded through a renegotiation of the city’s debt, he added.

“Of course it’s not Mediterranean,” he said. “The guidelines for Art in Public Places call for art that is different and playful.”

In a representative democracy, he said, voters delegate decisions such as these to experts in the field. The expertise of the Cultural Development Board in choosing the art works should be trusted, he said.

“I feel very, very strongly that it’s the death of Art in Public Places if we allow the second-guessing of art,” the mayor said. He has not received any emails about the issue in months, he added.

“People have stopped writing you because they have given up hope that you will change your mind,” Ms. Slesnick said. “People have written to me about what they’d like to do with the sculptures; all but about seven would like to have them moved. I’d like to see them have a voice.”

“There has been a democratic process” involving 31 public meetings, said Commissioner Vince Lago. “Art is supposed to engage you, to make you think. We need to have a little bit more tolerance on this issue.”

Ms. Slesnick’s resolution to place the issue on the ballot was not seconded by any other commissioner and failed.

2 Responses to Coral Gables sculptures win the battle of tastes