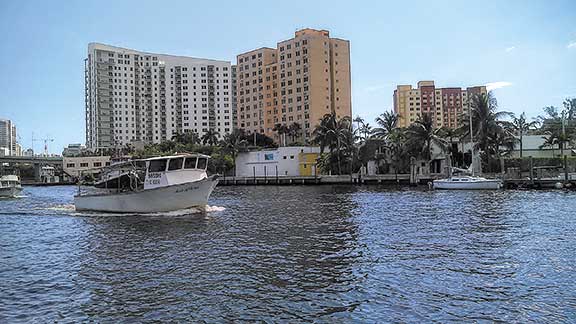 If it were up to the Miami River Commission, it would bar restaurants planned for two riverfront sites zoned marine-industrial.

As it is, however, the decision is left to the city planning director after the negative river commission votes.

While both sites are zoned marine-industrial, a restaurant would be allowed with special permission or by warrant – a special conditional use that the planning director decides, subject to appeal by neighboring property owners.

Ms. Bohnsack said she’s been fighting for the working river nearly 20 years and feels “invested in it.”

She said it wouldn’t be right to back approval of the restaurants on marine-industrial land. She said there’s been no demonstration that the restaurant is an accessory use and, in fact, she sees it as a major use.

“In my view, it is a betrayal,” said Ms. Bohnsack. “It’s a working river. Give it time to evolve. Don’t give away what’s been reserved for [the marine industry].”

The River Arts Complex has met objections all along from Cory Offutt, owner of a neighboring boatyard. For months he’s spoken against the plan and the loss of marine-industrial property. He says a restaurant with outdoor dining is incompatible with a loud, smelly boatyard.

Mr. Offutt’s lawyer, Tucker Gibbs, said there’s no evidence the restaurant would be an accessory use, and in fact he said it would be the site’s primary use – “the tail wagging the dog.”

The river commission voted to recommend that the city amend its zoning code for similar warrant applications by inserting criteria for marine-industrial as the primary use and other uses allowed by warrant to be measured as the “secondary/accessory use.”