Advertisement
The Newspaper for the Future of Miami
Connect with us:
Front Page » Real Estate » Miami-Dade County’s supply of luxury condos for sale could last five years 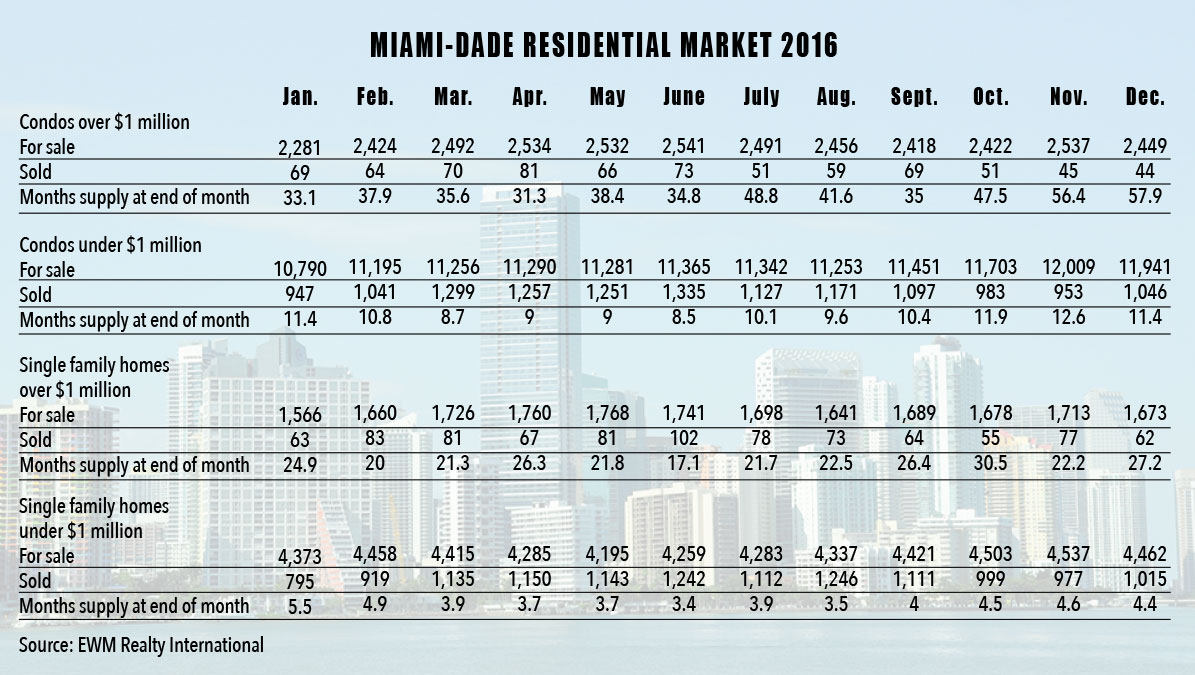 Plagued by swelling inventory and sagging sales, Miami-Dade County’s supply of luxury condos – defined as those priced at more than $1 million – stood at 2,549 by the end of 2016, according to a new market report from EWM Realty International.

That’s by far the highest backlog since the end of 2008, when the end of a building boom collided with the recession, briefly sending the supply in that category to a dizzying 80 months.

Months of supply is “the most important metric” in residential real estate, says Ron Shuffield, EWM’s president. It’s calculated using units for sale at the end of the month and the average number of sales over the previous three months. In general, Realtors consider a nine-month supply healthy.

Statistics from the fourth quarter 2016 Elliman Report, which focuses on the relatively high-end island and coastal neighborhoods, support EWM’s findings. In the luxury condo category – defined by Douglas Elliman brokerage as the top 10% of the market – this report found active listings in Miami Beach and the barrier islands increased 79.4% since fourth-quarter 2015, for a 67-month supply. At the same time the inventory of luxury single-family homes grew by 96.2%, representing 84 months of supply.

In mainland coastal communities, Elliman’s report registers a 39.1% increase in luxury condos to absorb, equaling 53.3 months of inventory. The top 10% of single-family homes in these areas fared somewhat better, with a 17.2-month absorption rate, 14.5% higher than at the end of 2015.

At the lowest end of the market, however, these trends are reversed. Mr. Shuffield says in 2016 48% of single-family homes sold countywide went for under $300,000, resulting in robust gains in median prices in markets such as Homestead, Hialeah and Miami Gardens, “but we are running out of inventory in those places. In many areas, it’s under two months.”

He attributes the oversupply in the luxury market primarily to its reliance on international buyers.

“So I think currency exchange issues have had the largest impact on our buyers over the past two years.”

Due to home value changes and hikes in exchange rates, EWM finds that a Venezuelan wishing to buy a home in Miami valued at $1 million in 2015 would end up paying 73.9% more in actual costs. For an Argentine, the bill would be 36.3% higher. Only Brazilians and Russians would find themselves paying less.

The inescapable conclusion, Mr. Shuffield says: Prices for luxury properties have to come down.

“I believe we have the largest pent-up demand of luxury buyers we have ever had in Miami,” he says. “With the population growth we have, the appeal of our architecture, our cultural amenities, health care and flights to all over the world, we will continue to draw people here from places where currency rates are declining.

“But in the short term the only fix is to lower prices to be in line with their expectations, because right now there’s more supply than demand.”

Over the past six months, Mr. Shuffield says, the pricing on 37% of the county’s million-dollar inventory was reduced an average of 14%.

In Miami Beach and the barrier islands, The Elliman Report found sales across all price ranges and property types dropped 21.5% during 2016, while prices rose 5.3%. For coastal mainland properties, it quotes 13.6% fewer sales and price hikes of 11.8%.