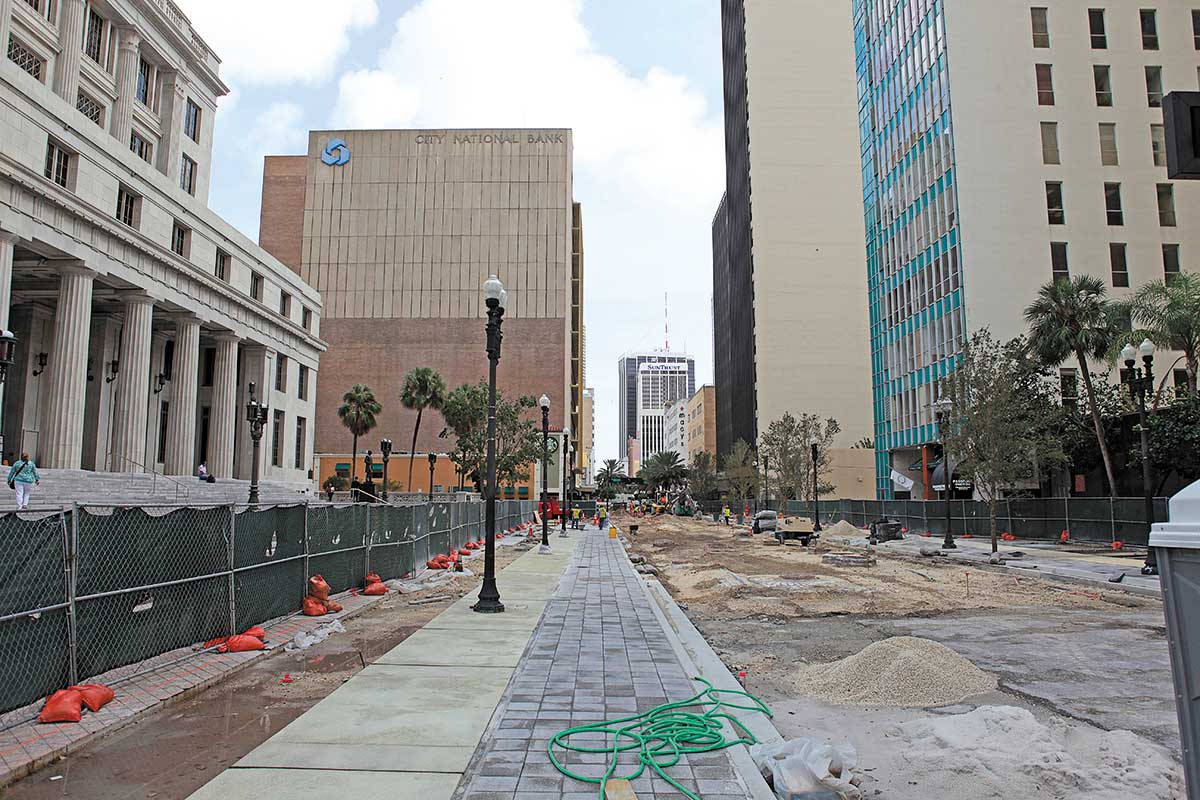 Miami had issued the contractor, F.H. Paschen, two violation notices because of slow progress on the project, which has been several years on the drawing board and almost a year under construction.

“The second letter had teeth in it and made it to the company’s corporate offices and to the bonding company,” Mr. Alonso said. Suddenly, after some personnel changes, things were once again in high gear, with about 20 people working onsite.

“Trees have been installed, the pavers are in and the sidewalks are almost complete” on phases one and two of the 13-phase project, Mr. Alonso said. When completed, the renovation will stretch from the Dade County Courthouse east to Biscayne Boulevard.

Last month, downtown authority directors noticed the slowdown and debated what to do. Miami’s Capital Improvements Program, which is running the project, had ruled that the contractor was in default and that a new one must be hired, said Ken Russell, authority chair and Miami commissioner.

It turns out that the contractor was already in dispute with the city over another job, a fact that didn’t disqualify it from bidding on the Flagler Street project. According to Miami’s bidding rules, the lowest price qualified contractor must be hired, and in this case it was F.H. Paschen, Mr. Alonso explained after the development authority meeting.

“I want to go on the record that we were prevented from being part of the bid and selection process,” said board member Jose Goyanes, who is owner of Metro Beauty Center and Churchill’s Barbershop, at the meeting. “In the future, that can’t be the case. We need to be allowed to be part of it.”

The downtown authority and stakeholders on the street – not the city – are footing most of the cost, yet members of the task force have complained that the city ignored them at almost every turn.

The Flagler Street design will feature a railroad theme, highlighting Standard Oil tycoon Henry M. Flagler’s achievement in pushing the Florida East Coast Railroad past Palm Beach and into Miami, thus connecting the fledgling city with the rest of the world.

The sidewalk design alternates light and dark grey bands of concrete to give the effect of railroad tracks, and an actual railroad tie is to be imbedded in the sidewalk to separate the walking surface from the street furniture and trees. The concrete was chosen because it is inexpensive, durable and easy to replace. Movable gates that look like those at railroad crossings reinforce the theme, can be used to close off streets for special events and can be propped up vertically when not in use.

Shade trees, bike racks and other furnishings complete the picture.

Flagler Street has long been a concern to downtown business owners. Many sidewalks have been expanded, restricted or rebuilt over the years. In addition, street surfaces are uneven, and a failed pavers project has left many conflicting surfaces.

Because underground pipes, drains and utility lines were antiquated and in severe disrepair, the City of Miami had to replace those before the above-ground work could be tackled, authority sources said.