Advertisement
The Newspaper for the Future of Miami
Connect with us:
Front Page » Real Estate » Miami deal would use prime riverfront for vast mixed-use development

Miami deal would use prime riverfront for vast mixed-use development 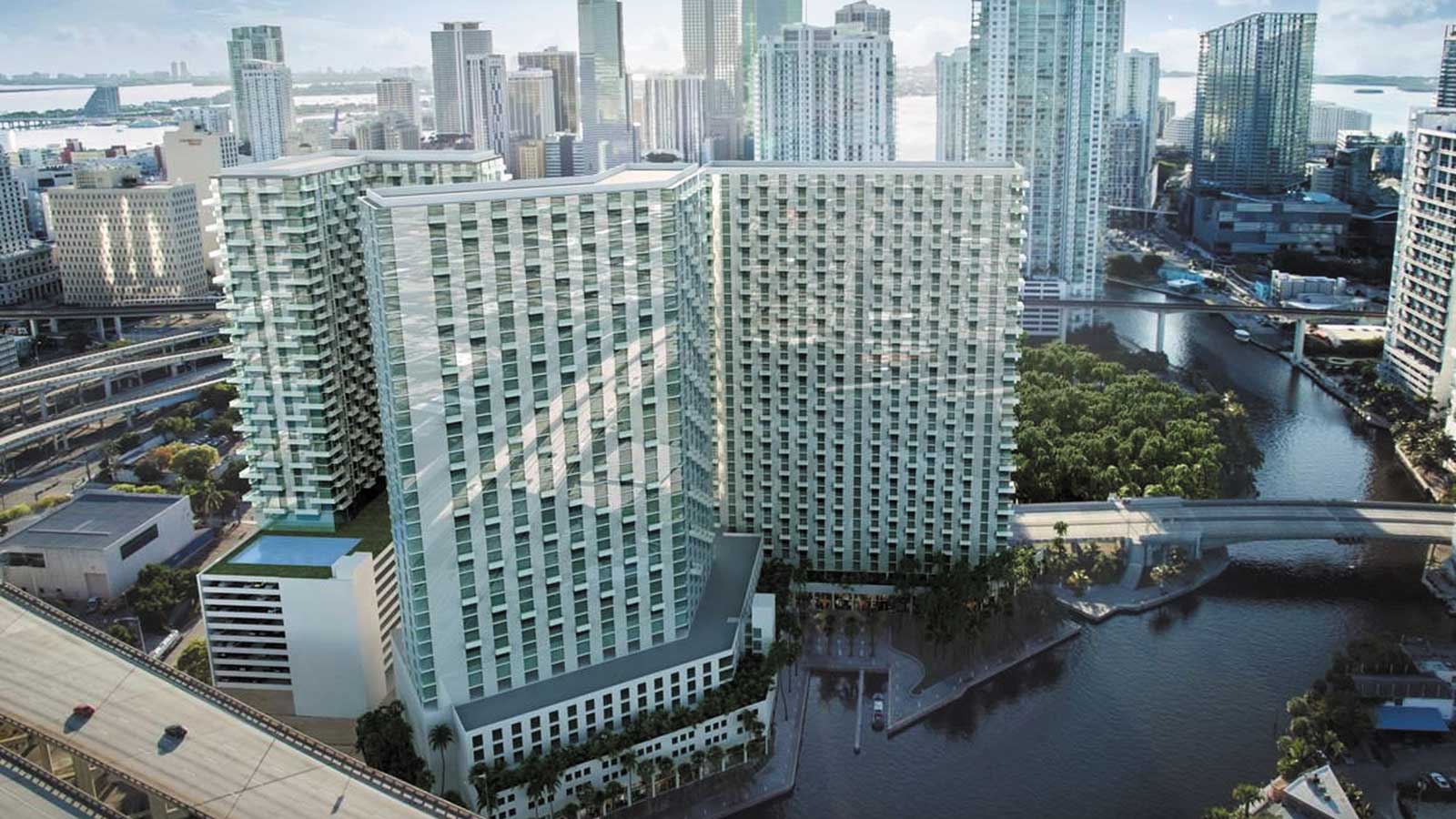 Miami commissioners are being asked to give the go-ahead to a complex deal that would gain the city new government offices, reap annual lease payments for 90 years, and free up prime riverfront land for a major mixed-use development.

And city voters would get to decide whether it becomes a reality.

On today’s (12/8) commission agenda is a resolution authorizing the city manager to finalize negotiations with a developer that is promising new digs for city employees and a multi-million-dollar triple tower on the Miami River that would mean new jobs and added tax base.

The city is prepared to sell or lease its current office tower complex on the river at 444 SW Second Ave., known as Miami Riverside Center.

City officials say they’ve outgrown the brown building with its rows of tinted windows, in the shadow of I-95.

In discussing the fate of property last fall, City Manager Daniel Alfonso said land along the river has become very valuable and the Riverside Center office building is not the “highest and best use” of the site, which with the public benefit program could hold up to an 80-story building.

Earlier this year the city, with the assistance of CBRE Inc., solicited proposals to relocate its administrative hub and subsequently dispose of the present building.

The building is about 23 years old and “unable to fully and satisfactorily meet the city’s future operating and client service needs,” the request for proposals says.

The goal is a new Class A space for city administrative offices within city limits that will “functionally, securely and conveniently serve the citizens of the City of Miami.”

Two proposers showed interest but in the end, only one bidder remained: Lancelot Miami River LLC, an affiliate of the Adler Group.

A selection committee that Mr. Alfonso appointed recommends that the city negotiate a contract with the Adler affiliate.

The proposal has several parts.

In a summary, Adler says it proposes to enter a 90-year ground lease with the city with a present valuation of over $70 million.

Adler says it is “uniquely positioned to maximize the value to the [city property] given that Adler owns the adjacent property directly to the north, which includes the access easements to the [Miami Riverside Center] and the plaza in front of the city property.

“Adler has a unique understanding of the MRC Property as it relates to all of the underlying easements and is in the best position to deliver and execute a plan to provide the city with a fair market value for the property,” the summary reads.

Adler plans to construct a new 375,000-square-foot office building for the city on another site, with three possible locations mentioned in the proposal: near the Lyric Theater in Overtown, next to Marlins ballpark in Little Havana, or as part of a mixed-use project on county land surrounding the Douglas Road Metrorail Station being built by an affiliate of Adler.

Adler’s long-term plans for the river property would see the creation of Nexus Riverside Central, a project the company says would provide much needed market rate housing for Miami residents and activate a stretch of the growing public riverwalk.

Nexus Riverside Central would consist of about 1,350 residences in three distinct towers, a 150-key hotel along the riverwalk, and about 30,000 square feet of retail and restaurant space connecting and activating the area along the river to the frontage along Southwest Second Avenue and Southwest Third Street, according to the developer.

Adler is about to begin Phase I of the project on its existing property consisting of a 36-story multi-family project with 462 residences and 7,000 square feet of retail at 230 SW Third St.

On the riverfront land, Adler plans to build Phase II and Phase III that would consist of two 36-story multi-family towers with a total of 900 units (450 units each), a 150-key hotel, and 20,000 square feet of restaurant and retail space.

The summary of the proposal says “while the current MRC site is operationally challenged … the location lends itself to be an economic driver for the city. Situated off of I-95 and along the Miami River, a disposition of the site provides an opportunity for the city to expand downtown development west along the river providing continuity and connectivity to downtown along the riverfront.”

It goes on to say the proposed redevelopment provides a unique opportunity “to generate approximately $1,550,000 in annual tax revenue once the building is completed and stabilized, as well as significant short- and long-term job creation.”

In a cover letter filed with the proposal, Adler executives say the company is a credible, capable firm that has the capacity to execute and successfully complete Nexus Riverside Central.

“Throughout its 50-year history, Adler Group has developed and acquired over 20 million square feet of industrial, office, and retail real estate and over 8,000 residential units,” the letter says.

The city administrative building is on choice land near downtown and booming Brickell, directly across the river from a proposed large mixed-use development to be called Miami River.

The high-profile parcel is also next door to city-owned open green space with three boat slips.

Any lease of city-owned waterfront property would require approval from city voters by referendum.