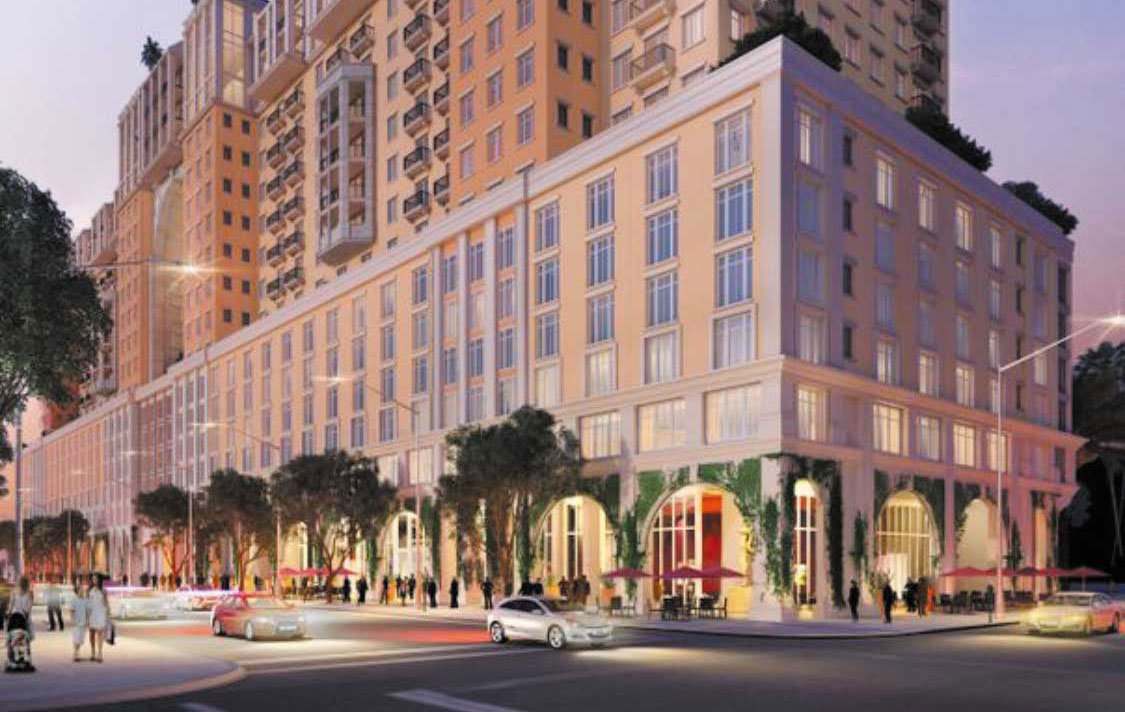 Coral Gables City Center, a proposal by The Allen Morris Company and The Related Group to replace two antiquated city parking garages with more appropriate buildings, last week was voted the winner of a design competition and are to be presented to the city commission for approval next month.

Municipal Garage 1 at 245 Andalusia Ave. is a three-level concrete building with 282 spaces (272 permitted, 10 for public use) one-half block south of Miracle Mile. What is envisioned to replace it is a Spanish-style Mediterranean structure with significant public spaces, including a rooftop café and a sky park that would also serve food and drink.

The developers plan to add 1,655 new parking spaces in two brand-new garages “to replace the disgusting old garages that are there now,” said Allen Morris. “People could park in the garages, have dinner on the deck, or take friends to the outdoor, landscaped sky park.”

Above the deck would be seven stories of office space. On the first floor of the building, the developers plan to offer the city 20,000 square feet of administrative office space, “so that people who are doing business with the city – from parking to zoning to economic development – could come to one convenient place,” Mr. Morris said. Also on the ground floor would be retail and restaurant space.

The building – which would be crowned by a majestic statute of Ponce De Leon, “pointing to the future,” Mr. Morris said – would be connected to Miracle Mile via an enclosed paseo, and even the alleyway has been reconfigured so that dumpsters would have their own garages. “The doors will be closed, with some sort of artwork on the outside. You’ll never see or smell the dumpsters.”

The developers plan to offer the city ownership of the building, including the garages, and would retain air rights for the commercial office spaces, he said.

Municipal Garage 4 at 345 Andalusia Ave. is seen as a three-level structure with 349 spaces (285 permitted and 64 for public use).

“It’s a long garage stretching the length of the building,” Mr. Morris said. The garage would remain, and above it would be a tower with 244 large apartments suitable to empty-nesters and those who have sold their larger Gables residences, he said. There would also be some ground-floor retail, he added.

The building, designed in an Italian Mediterranean style, would be constructed over a grand arch modeled on the Arch of the Republic in Florence, Mr. Morris said. “It’s going to be a beautiful, dramatic space, and I predict it’ll be one of the most photographed places in Coral Gables.

“The building will be right across from Publix and an elevator ride from restaurants, shops, and entertainment. These residents will allow the city to attract a higher level of retail. I’m excited that we’ll be bringing in 1,000 new people and we won’t increase traffic by even one car,” he said. “We’re creating a sustainable, walkable community.”

The garages associated with the project are to be “smart” shared structures with electronic signage to show drivers how many parking spaces are available. The spaces would allow shoppers and visitors to park during the day and residents at night, he said. The developers plan to add the city’s other garages to the system and make it all available on a smartphone app.

“We can take 50% of the nuisance traffic – people driving around looking for parking – off the streets,” Mr. Morris said. “With the app, someone could buy tickets at the Miracle Theatre, book a table at Ortanique, and reserve an individual space in a garage.”

The garages are being designed so that, when people actually begin to use their cars less, each floor can be repurposed, he added.

Coral Gables City Center is to go before the city commission next month. If it’s approved, the design and permitting phase is expected to take about a year. Construction of the office tower will take about two years; the apartment tower about two and one-half years, Mr. Morris estimates. At least one of the garages would be kept open to minimize inconvenience, he said.

“We’re very excited and inspired,” he said. “This is the next step in creating a place to live, work and play, and lowering the city’s carbon footprint. Ironically, we’re going back to the way our European ancestors lived, with the home above the shop. It’s a much simpler way to live. You don’t spend your life in traffic.”

Coral Gables City Center and The Shops and Residences at Miracle Mile, by TC Gables, LLC, an affiliate of Terranova Corp., were chosen from among five developers who submitted first-stage conceptual designs several months ago. The city has for years sought redevelopment proposals for the two garages.