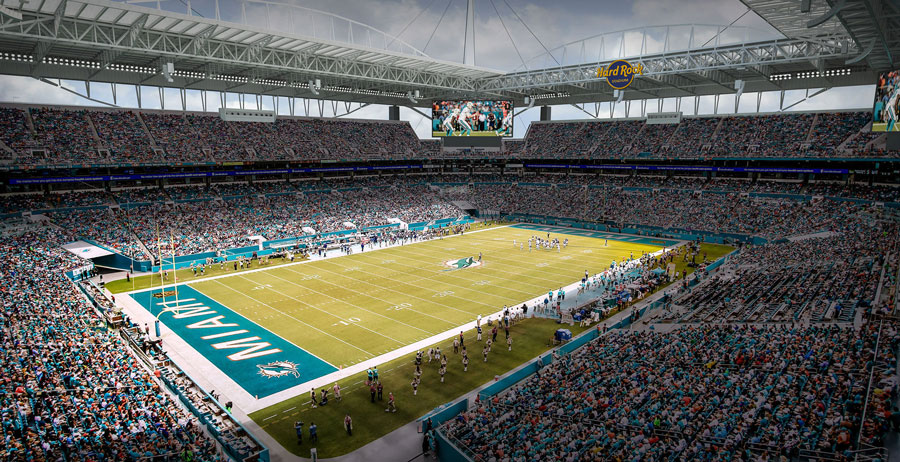 Bonds that funded past development and redevelopment at what is now Hard Rock Stadium in Miami Gardens have been affirmed at a BBB rating with a stable outlook by Fitch Ratings, whose bond ratings are paid for by the bond issuers.

Fitch notes that the bonds were issued by the Industrial Development Authority on behalf of the Miami Dolphins football stadium’s owner South Florida Stadium LLC, which is obligated for all payments on the bonds. South Florida Stadium also issued $100 million in bonds through the Industrial Development Authority in 2015 as part of the current stadium renewal funding, but Fitch does not rate those bonds.

The current renovation, Fitch says, has spent about $372 million of its $500 million capitalization on the first two phases.

The third phase next year is to include additional suite and club area renovations.

In looking at the credit of the stadium ownership, Fitch notes that in the fiscal year that ended March 31, stadium-related revenues grew about 11%, “”driven by luxury suite premiums and club seats, while signage and sponsorships declined.” Total revenues also declined for the fiscal year, Fitch said, “reflecting fewer other events including other sporting events and concerts, due to the ongoing construction during the [football league’s] off-season.” To offset the decline, Fitch said, expenses were cut 7%.

In citing factors underlying its bond ratings, Fitch cites “Hard Rock Stadium’s status as a premier venue in South Florida,” the strength of the National Football League, football’s player contract through 2020 that “provides for a lengthy period of labor relations stability” and the stable fan base of the Dolphins.

Also cited as strengths for bondholders are that “a high percentage of collateral is contractually obligated and consists of luxury suite revenues, club seat revenues, stadium advertising and sponsorships, concessions, annual stadium rent, parking and other revenues.”