Advertisement
The Newspaper for the Future of Miami
Connect with us:
Front Page » Government » Path for 2017 Miami International Boat Show cleared 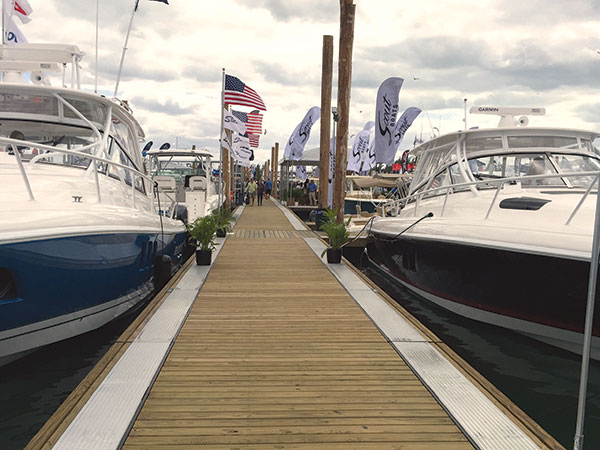 City of Miami officials are working now on plans for the 2017 Miami International Boat Show on city-owned Virginia Key.

The hugely popular show is just three months away.

At its Oct. 27 meeting, city commissioners approved five agreements granting temporary access to certain locations on the island to the National Marine Manufacturer’s Association (NMMA) Inc., the company that puts on the annual event.

As a condition to approval of the access agreements, the city manager’s office was directed to address an access issue that allegedly occurred during the 2016 boat show, the first year it was held on the key.

The city owns the bulk of the barrier island and has several lease agreements with for-profit and non-profit entities.

A revocable license that city commissioners approved in January 2015 granted the NMMA the right to use the land and water surrounding idled Miami Marine Stadium, and other adjacent city-owned parcels, to stage the annual show.

The license authorized the creation of access agreements along Virginia Key, subject to commission approval, according to a staff memo from City Manager Daniel Alfonso.

NMMA will pay the city 50% of profits obtained as a result of the boat show, as called for by the license, Mr. Alfonso wrote.

Each access agreement says the city grants to NMMA temporary access rights to use the properties “for the purposes of staging, providing parking, providing shuttle service over, across, and through the premises and other ancillary uses for the 2017 Boat Show and future Boat Shows.”

Esther Alonso of Virginia Key Outdoor Center LLC spoke at the October meeting, complaining that access to her business was cut off by activity related to the boat show.

She has a license with the city to operate a recreational business at 3801 Rickenbacker Causeway, offering equipment rentals, paddleboard instruction and more. The center is on the northeast portion of the island, off of Arthur Lamb Jr. Road.

Ms. Alonso said vehicles and staging activities tied to the boat show damaged a green field next to her leased site.

She said her business suffered because of a lack of coordination between the city, the association and other leaseholders on the island.

“I shouldn’t be affected by their lack of planning,” Ms. Alonso said.

Commissioner Ken Russell said her complaints were reasonable and he asked that the city manager’s office look into the matter and make plans to avoid the same situation during the 2017 boat show.

Mr. Russell said he’d like to see a list of lessons learned from the 2016 boat show and how they will be addressed the second time around.

The five new access agreements were prepared by the city’s Department of Real Estate and Asset Management. They include:

Village of Key Biscayne officials have been at odds with the city since it allowed the boat show to use parts of Virginia Key. The barrier island links Key Biscayne to the mainland via the Rickenbacker Causeway.

The city entered into a license agreement with the NMMA, and allocated more than $20 million to make improvements to the area around the long-closed stadium, with plans for other non-specified events on the site.

Village officials and residents objected to the boat show on Virginia Key, saying it would worsen traffic and endanger wildlife and the environment. Opponents also voice concerns about the city’s future use of the property and waterfront stadium, saying the changes were too intensive.

The city and the association touted a successful 2016 boat show in February, saying a big part of the positive outcome included water taxis and shuttles to reduce the number of private vehicles.