Advertisement
The Newspaper for the Future of Miami
Connect with us:
Front Page » Government » Miami commissioner seeks $15 living wage for some contract workers 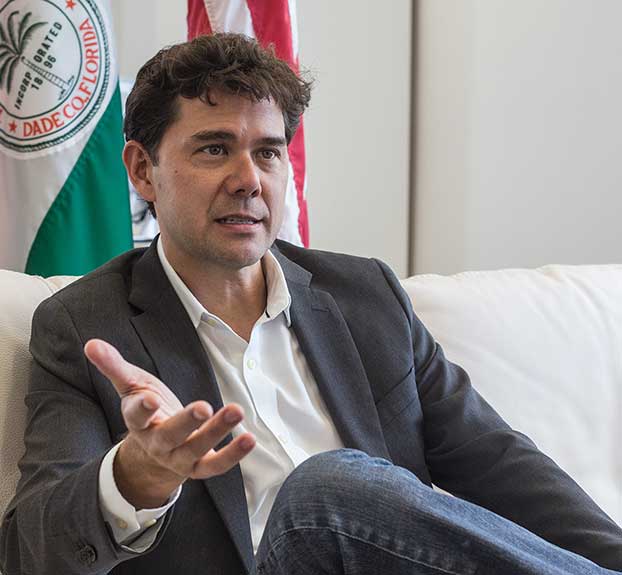 Following up on a promise made this spring, Ken Russell, the freshman City of Miami commissioner, is sponsoring a proposal to guarantee a living wage for workers fulfilling city service contracts.

Mr. Russell, vice chairman of the city commission, is joined in sponsorship of the proposed legislation by Chairman Keon Hardemon.

Commissioners granted preliminary approval Oct. 27 to a new ordinance to require a living wage – calling for $15 an hour minimum – on city contracts.

The final vote could come at the commission’s November meeting.

If approved, the ordinance would require at least $15 an hour be paid for service contracts entered into by the city on or after Jan. 1, 2017, in which contractors provide services exceeding $100,000 annually.

Mr. Russell has been pushing for higher wages for months, and Mr. Hardemon has been the champion of several anti-poverty programs and activities in his nearly three years on the commission.

“This is a very important thing we can do for those who work hard in the community,” said Mr. Russell before the Oct. 27 vote.

He acknowledged there are very few places where the city commission can require a $15 an hour wage, so this is a rare opportunity.

Mr. Hardemon mentioned many ways the commissioners have fought poverty in the city in recent years.

“This is another tool” in that fight, he said.

Mr. Hardemon said the living wage ordinance will help to elevate people who live and work in the city who need a lift in order to put more food on the table and more clothes on their backs.

“This is a great thing,” said Commissioner Wifredo “Willy” Gort.

The proposed ordinance sets out to define “living wage” and provides remedies for violations.

The impacted service contracts are those awarded by the city that involve a total contract value that exceeds $100,000 a year for any of the following services: food preparation or distribution; security services; maintenance services such as custodial, cleaning, computers, refuse removal, repair, refinishing and recycling; clerical or other non-supervisory office work; transportation and parking services; printing and reproduction services; and landscaping, lawn and agricultural services.

The proposal says for violations of the ordinance the city shall sanction a service contractor by requiring the contractor to pay wage restitution at its expense for each affected employee.

The city may also sanction the service contractor in at least one of these additional ways:

νThe city may impose damages of $500 for each week for each covered employee found to have not been paid in accordance with the ordinance.

The living wage issue arose early in the year when commissioners discussed an amended contract with a restaurant in Bayside Marketplace, a retail center on city-owned land.

It came up again in April when commissioners were considering securing janitorial services for city government buildings.

Mr. Russell said then that he was working with staff on a draft living wage ordinance that he planned to bring to the commission later.

Mr. Russell has led fellow commissioners while serving on the Southwest Overtown/Park West Community Redevelopment Agency in approving a wage of $15 an hour for part-time street-cleaning trainees.

This comes as minimum wage workers across the country have been campaigning for $15 an hour. The federal minimum is $7.25. Florida’s minimum is $8.05.