Advertisement
The Newspaper for the Future of Miami
Connect with us:
Front Page » Real Estate » Inventory of single-family homes priced under $400,000 has shrunk

Inventory of single-family homes priced under $400,000 has shrunk 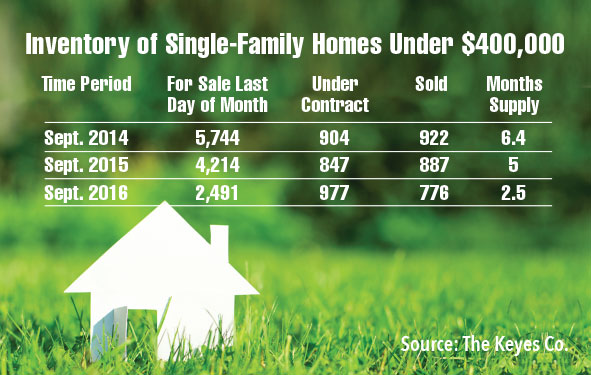 Recent sales figures show the county’s inventory of single-family homes priced under $400,000 has shrunk to a new low – and most of the new homes under construction are in South Dade, a location some say doesn’t makes sense for many prospective buyers.

“What’s interesting,” Mr. Pappas says, “is that contrary to what you might expect, the average number of days on the market increased from 77 days in September 2014 to 104 days two years later.”

That anomaly, he says, points to a significant difference in the local housing market two years ago and today.

“In 2014, 49% of under $400,000 homes were distressed properties sold under market,” Mr. Pappas says. “Today, only 16% are distressed. Instead of banks selling to investors we have real sellers and real buyers, and there is more emotion involved. Also, since prices have increased, buyers are taking more time to understand the market and be sure the price is right.”

The story these statistics tell is that countywide the supply of existing single-family homes for sale for under $400,000 has dropped from 6.4 months to 2.5 months in just two years.

In Homestead and points south, Lennar and Texas-based D.R. Horton, both large national builders, are putting up new communities, says Tony Garcia, Keyes district manager for the area. He quoted average sale prices at $325,000 to $380,900 for a home averaging 2,200 square feet.

“Lennar and D.R. Horton bought a lot of the land smaller developers that went out of business had left,” he says, “and now new land is being purchased, too.”

New development, Mr. Garcia says, will be from 280th Street to 328th, “where there are thousands of acres available.”

Lennar, whose representative declined to be interviewed for this article, claims 32 communities in Miami-Dade on its website, where a total of 86 available single-family homes for under $400,000 are listed. Sixty-seven are in Vineyards, Lennar’s sprawling Homestead community. Most of its available inventory in that price range is in multifamily properties such as townhouses and villas.

In an email, D.R. Horton reports it currently offers homes in three communities in the Homestead/South Miami-Dade area, where prices start in the mid-$200s.

“Because demand is high across the county for homes under FHA loan limits,” a company representative writes, “D.R. Horton strives to offer homes at those price points.

“We continue to focus on the few large tracts of land within the Urban Development Boundary that remain, while supplementing our lot supply with smaller acreage sites in close proximity to each other and in infill locations.”

“Out west, we cannot afford to sell homes for less than $460,000,” says Sergio Pino, president and founder of Miami-based Century Homebuilders Group. “There are no large tracts available anymore unless you go to South Dade – and there is no employment base to support the people who live there.”

But if local people want to be in Miami-Dade County, he says, many cannot afford a single-family home anywhere else.

“I am constantly scouting small deals in locations where there is an employment base,” Mr. Pino says, citing townhouses near Sweetwater and others in the Westchester area.

Century is nearly finished with the first phase at Midtown Doral, where single-family homes start at $360,000, he says, but phase 2 is temporarily on hold due to the situation in Venezuela. “If you want to take your money out it will cost you 1,567 bolivars to $1,” Mr. Pino says. “The official rate is 659 to 1. We are looking into the Colombian market for that, because Doral used to be a strong Colombian market.”