Advertisement
The Newspaper for the Future of Miami
Connect with us:
Front Page » Top Stories » “Signature bridge” on I-395 design due soon

“Signature bridge” on I-395 design due soon 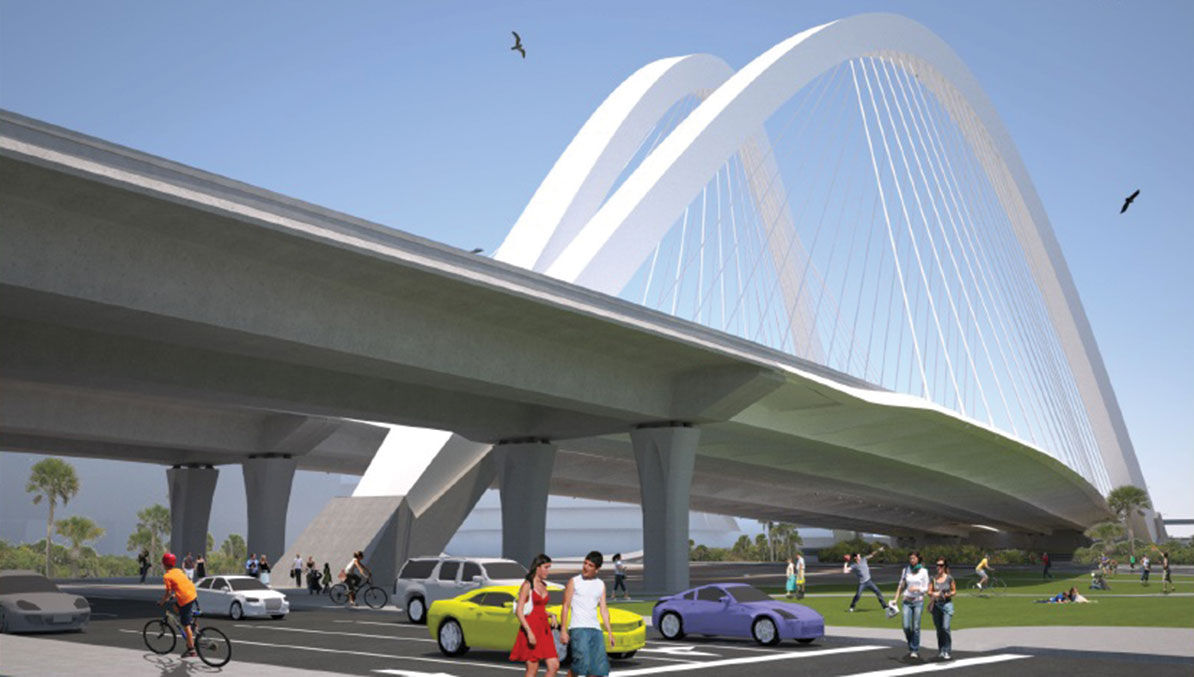 Five design firms have earned the right to submit a final design proposal for what’s being called a “signature bridge” on I-395 in downtown Miami and one of them should get a contract by spring, according to state transportation officials.

The Florida Department of Transportation anticipates construction to begin in late 2017 and last five years. A state website devoted to the I-395 improvement project lists December 2017 as the construction start date.

A change from the original plan is the addition of three related components, which adds more than $200 million to the overall cost, bringing it to $800 million, according to Maria I. Perdomo of the state transportation department and project manager for the I-395 project.

The bulk of the project is to rebuild 1.4 miles of I-395 from the I-95/Midtown interchange to the west channel bridge of the MacArthur Causeway in Miami.

The freeway to be rebuilt is part of State Road 836, locally known as the Dolphin Expressway. The portion between I-95 and the causeway is designated as I-395 and takes traffic to and from Watson Island and Miami Beach.

The project funding is divided into those components as well, she said.

“The department added the MDX SR 83611, I-95 pavement reconstruction and the westbound connector components to the original I-395 reconstruction component, which increased the estimate from $600 million to $800 million,” Ms. Perdomo said.

The latest progress in the overall project came this summer when the transportation department sought proposals for the bridge, based on minimum requirements the department set for the bridge and the plaza space beneath it.

The minimum requirements for the bridge include a minimum suspended span length 500 feet and a minimum elevation above ground of 245 feet.

The minimum requirements for the open spaces underneath are a combination of sidewalks and plantings. An aesthetics manual that was part of the state’s request for proposals noted that drainage must be handled in a way to allow “development of the full space” under the bridge.

“The department is currently in the procurement process,” Ms. Perdomo said.

“The final design concepts for the signature bridge are due at the beginning of next year. At this time, five firms passed the pass/fail phase of the Aesthetic Signature Bridge Proposal. We are anticipating award of the project to the winning proposer by spring of next year,” she said.

The I-395 project involves rebuilding the I-395 corridor to increase capacity and improve safety by eliminating geometric and operational deficiencies.

New elevated ramps, one for both the east and west directions, will provide a direct link between I-95 and I-395. The project includes building a signature bridge over Biscayne Boulevard. In addition to the new bridge, the project will enhance streetscape design underneath the bridge.

Main goals include creating a visually appealing bridge, and building higher structures that will improve visual quality, allowing for multiple activities underneath the bridge.

Design goals include opening and brightening the environments along city streets that run under the expressway like Biscayne Boulevard, Northwest 13th and 14th streets, Northeast First and North Miami avenues and others.

The MDX 83611 project is to improve capacity, adding new westbound and eastbound facilities and widening the SR 836 mainline in both directions.

FDOT has partnered with MDX to fund part of this new westbound connection.

The I-95 pavement reconstruction includes removing and replacing the mainline I-95 concrete pavement and a bridge traffic railing barrier retrofit.

10 Responses to “Signature bridge” on I-395 design due soon