Advertisement
The Newspaper for the Future of Miami
Connect with us:
Front Page » Real Estate » Grudging OK for convention center and hotel beside Miami Worldcenter

Grudging OK for convention center and hotel beside Miami Worldcenter 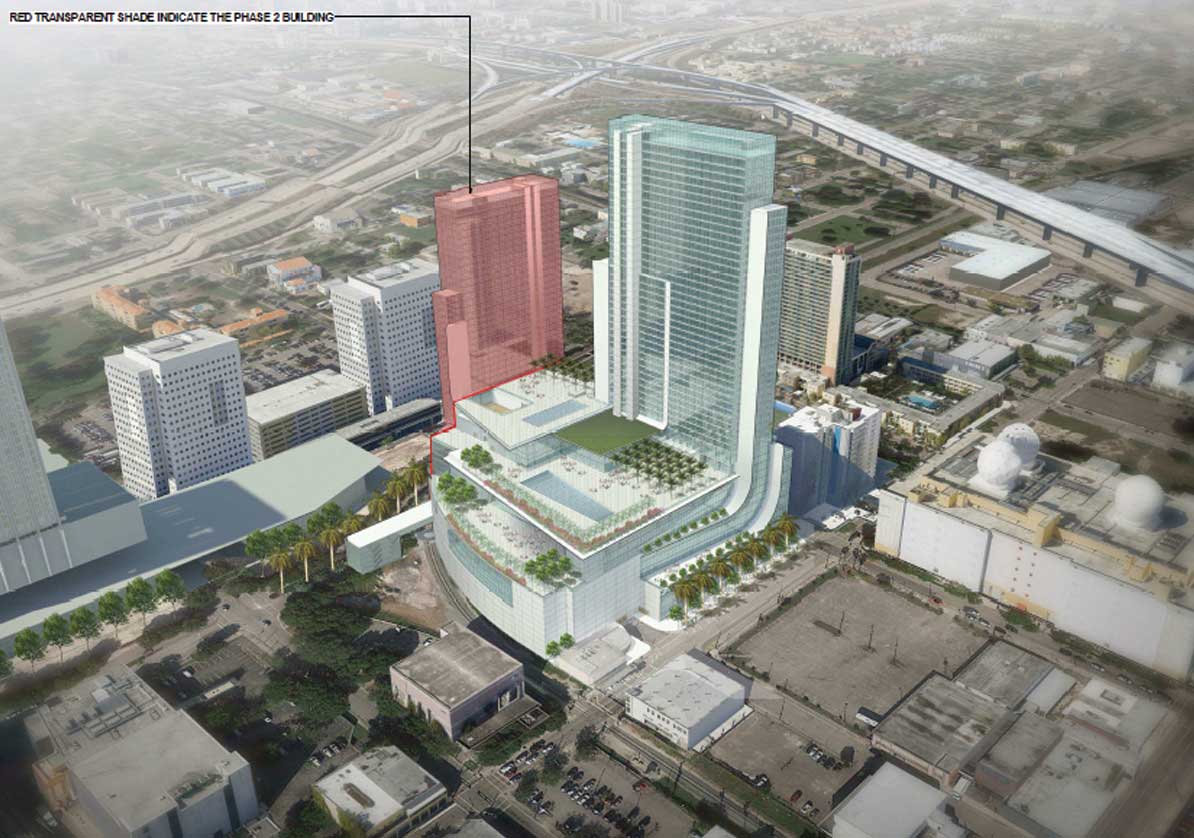 Plans for a redesigned convention center and hotel beside Miami Worldcenter earned the support of a Miami review board, even though members weren’t entirely satisfied with the new look.

But earlier this year, MDM Group and its design team announced changes to the proposal. The most notable modifications broke the project into two phases, dropped the number of hotel rooms by 100 to 1,700, and dropped a design of four joined and curved glass towers at varying heights in favor of two standard towers.

Due to the project’s density and intensity, the city’s planning director wanted the city’s Urban Development Review Board to take a look at the new proposal.

Meeting Oct. 19, the board recommended approval of the new plan, with conditions.

Board members’ concerns seemed to center on keeping the site active all the time, not just when big conventions filled the ballrooms and exhibition space. They are also pushing the developers to have more of a connection between the first hotel tower and the second.

One board member lamented losing the unique curvature of the original hotel towers and instead going forward with more a traditional, even “dated,” design for the towers.

The site at 700 N Miami Ave. has been vacant for years. The land is generally between Northwest Eighth Street and the Florida East Coast Railway right-of-way, and Northwest First and North Miami avenues.

Edward Martos, an attorney for the developers, said financing was a factor in choosing to build the hotel and expo center in phases.

“This will help the project come to realization,” he said.

In letters and documents filed with the city accompanying the revised plan, Mr. Martos said the project will provide the city with a “sorely needed” convention center offering more than 350,000 square feet in convention and meeting space and 1,700 hotel rooms.

“In the course of planning the project’s construction, the applicant has identified a number of design modifications that should improve the design and operation while also responding to changes in the market,” wrote Mr. Martos.

He listed the modifications as:

νRedesigning the hotel tower to change it from a “single massive, curved tower” to two separate towers, so as to improve the flow of light and air and views for hotel guests and neighboring properties.

νModifying the primary drop-off area to improve access to a tunnel that will allow valet vehicles to avoid having to leave the property.

νConstructing the project in two phases.

Mr. Martos emphasized the changes to the drop-off area in comments to the board, saying the redesign will greatly improve the flow of vehicles to and from the attached garage.

“We think it’s a huge improvement,” said Mr. Martos. The original design had valets driving vehicles around the block before entering the parking structure, he said.

Igor Reyes, a partner at the firm, displayed renderings and site plans of the previously approved project to compare with the new drawings.

The junior ballroom, which is “still enormous,” has a wall of glass that looks south to downtown Miami and has an “ample” terrace for outside activity and views, Mr. Reyes said.

Much of the vertical circulation is designed into the building’s northeast corner, he said.

Mr. Reyes touted the two towers and their planned alignment, the first on the north end of the site and the 600-room second phase tower on the northwestern portion of the site.

The new design creates much more “interesting mass” by having the bulk broken up, he said.

The towers are slimmer and their placement offers more light and air between project components, he said.

Mr. Reyes did say developers hope to attract restaurants to help make sure all outside areas are active.

Towering glass walls and terraces face the east, all exposed toward Miami Worldcenter, “so you see what’s going on,” he said.

The hotel and expo center is designed with its connection to Miami Worldcenter in mind, he said.

Miami Worldcenter is rising on more than 10 blocks in Park West, bringing condos, apartments, shopping and entertainment to the neighborhood. A key to the overall development is a Seventh Street Promenade that connects with the hotel and expo center.

Board member Fidel Perez said, “A project like this is really needed in this area.”

But he said the building lacks spaces that relate to the sidewalk, particularly on the east facing Miami Worldcenter, he said.

Mr. Perez talked of the convention space being “dead” space when not used and the project needing features to keep the sidewalks active.

Dean Lewis, acting board chairman, agreed, noting that liner retail spaces on the building would help keep “eyes on the street” when the convention center isn’t active.

Mr. Perez suggested a small bar or restaurant for the northeast corner.

The project’s southern end is solid wall with no windows. Board members wondered about more glass and openness on that end, but the attorney and architect pointed out that the south side is tight up to the railroad tracks, there is no sidewalk in that area and there is an AT&T switching building there.

Board member Anthony E. Tzamtzis complimented Mr. Reyes on his presentation, saying he did an exceptional job.

“I am humbled by the size of this project and its importance to the city,” he said.

Mr. Tzamtzis said he agreed with his colleagues that more uses are needed to enhance pedestrian activity.

He said the new design is substantially different from the original, particularly as it relates to Miami Worldcenter to the east.

The original orientation had the hotel’s curved towers providing a backdrop, he said.

“This version has a different orientation and pays more attention to the south than the east,” Mr. Tzamtzis said.

Mr. Lewis said it was “a pity” that “we lost” the original curved scale of the hotel for another linear tower – a lost ‘wow’ of the sweeping arc.

“I’m disappointed by the compromise in the pursuit of phasing,” said Mr. Lewis.

The board did direct the developers’ team to consider more ways to offer smooth connections between the hotel towers, the amenity decks, common circulation areas and the convention space.

Mr. Reyes said the plan calls for the second tower to have its own bar and lounge on the ground floor.

The conditions ask the developer to work on better connectivity between the hotel and convention center itself and with neighboring Miami Worldcenter; better articulation of the façades; screening for mechanic equipment; possibly moving the phase two tower closer to the first tower and a planned sky atrium and shared lobbies; and possibly activating the northeast corner with a commercial establishment.