Advertisement
The Newspaper for the Future of Miami
Connect with us:
Front Page » Top Stories » Miami getting serious about sea level rise 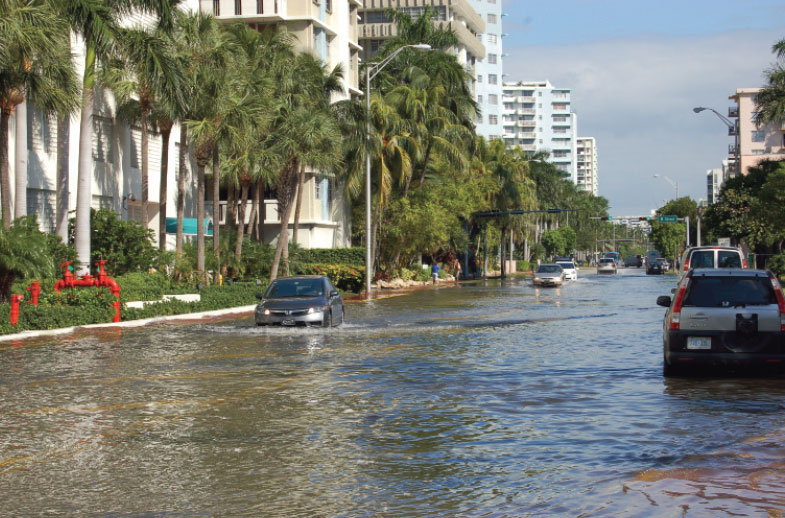 Saying it’s time to get serious about sea level rise, Miami city commissioners are moving to reauthorize a committee studying the topic and give it funding.

On Sept. 8 the commission granted preliminary approval to an ordinance re-establishing the city’s Sea Level Rise Committee to study sea level rise and its effect on the city and make recommendations to the commission.

It is tasked with incorporating all available information on the subject, including recommendations made by the federal government and Miami-Dade County.

The new legislation, which could see a final vote in October, would allocate $50,000 for the committee’s first annual budget.

In a separate but related vote, commissioners approved updating the city’s stormwater management plan, with a specific directive to consider sea level rise.

Along with the Sea Level Rise Committee, rising seas and climate change matters have also been recently examined by the city’s Waterfront Advisory Board.

South Florida is ground zero when it comes to potential risks from rising water, Steven Wernick, chairman of the Waterfront Advisory Board, told commissioners.

“There are some major, major issues” associated with sea level rise impacts on the city, he said.

In an earlier directive, the city commission had asked the Sea Level Rise Committee and Waterfront Advisory Board to review and report findings on the University of Miami’s 2016 Climate Change Special Report.

At the Sept. 8 meeting, both Mr. Wernick and Wayne Pathman, chairman of the Sea Level Rise Committee, requested another 60 days to report on findings from the university report.

Mr. Wernick said university officials planned to make a presentation on its climate change report to the city this week.

The Waterfront Advisory Board had a meeting scheduled for Tuesday of this week with climate change and sea level rise items on its agenda. Members planned to review several previous reports and studies, including “A Region Responds to a Changing Climate,” a regional action plan published in fall 2012, and the City Of Miami Climate Action Plan from 2008.

Mr. Wernick said the board and committee would meet jointly before returning to the city commission later in the year.

Mr. Pathman said the committee has been working toward solutions. While the group considers sea level rise a “grave” issue, members don’t look at it as a doom-and-gloom situation but rather an opportunity, he told commissioners.

Mapping of areas that sea level rise is most likely to impact is a first big step, said Mr. Pathman, along with following the ever-changing insurance industry as it relates to the topic.

Commissioner Ken Russell said there are huge issues at stake.

“We are grossly unprepared,” he said.

The federal government projects that sea levels will rise between 4 and almost 7 feet by the end of the century.

Sea level rise will have broad impacts related to city infrastructure, storm surges, public health, insurance rates, the availability of potable water and socioeconomics, and the city must adapt to and mitigate the adverse effects of sea level rise within its jurisdiction, says the legislation.