Advertisement
The Newspaper for the Future of Miami
Connect with us:
Front Page » Government » Inside Hitachi rail car assembly plant 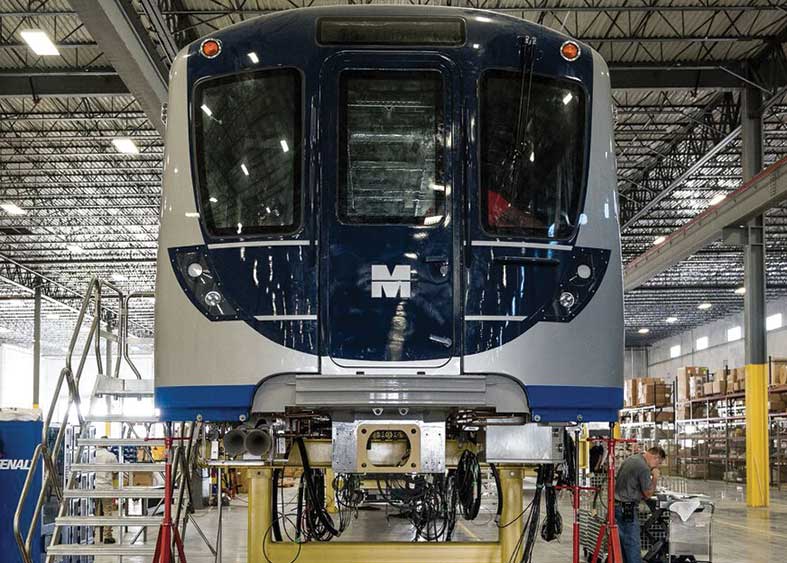 If you’ve never darkened the doorway of a train manufacturing plant, it’s understandable to at first mistake Medley’s Hitachi facility for a contemporary art museum and the first three of 136 Metrorail cars being assembled there now to replace Miami-Dade’s fleet as a unique exhibit.

Everything in the airy 140,400-square-foot plant is spotless, from an elevated ceiling latticed with steel to a glossy concrete floor.

It’s quiet; the three cars in production seem artistically placed; and stairways leading to concrete pits, train tracks across the building and a north-to-south rolling platform to transfer cars out of the building onto a platform are equally pleasing to the eye.

Within a very short time, however, it’s clear the warehouse inside Miami International Tradeport is specialized for the sole purpose of train-car manufacturing and subassembly.

Owned by Hitachi Rail US, a subsidiary of one of the leading railway system suppliers, this is the Tokyo-based company’s first manufacturing facility in Miami and third in the US.

The custom-designed facility opened in March, said Mr. Melani, who pointed out features specifically for the assembly of heavy-rail metro including concrete pits. He said they were designed with two lines to accommodate work/testing of eight cars simultaneously to avoid bottleneck.

Once the facility begins operating at full production, Mr. Carl said workers will be completing six cars a month.

When the cars arrive in Medley, he said, they’re basically just metal shells. Prior to that, they’re made at a company called DRS Sustainment Systems in West Plains, MO, which has primarily defense contracts for military products and technologies for such uses as battlefield reconnaissance and surveillance.

“DRS has the two largest welding robots in the world building these shells for the company’s first municipal contract,” Mr. Carl said. “We get the shell and undergo the full assembly of all components: doors, electrical systems, wheel & axel assembly, install the rooftop HVAC and the under-frame equipment that takes the cars down the track.”

These first three cars, he said, are all the way to the water test stage to ensure they’re water tight. The cars will undergo a specified water pressure for a specified time at a large sloped pit with an enclosure containing 400 spray nozzles. Once tested and proven qualified to withstand the deluge of water Miami can bring, interior work will begin.

The new Metrorail cars will be roughly the size and length of those they’re replacing but with improved components, thanks to 40 years of technology.

“Riders won’t see a lot that’s different inside but they’ll certainly hear and feel vast improvements,” Mr. Matthews said. Technology has brought many changes since the county’s existing Metrorail fleet was built in 1984, including disc breaks that are essentially silent (compared with the screeching sound of tread breaks), computerized control of systems for  a smoother acceleration, reduced use of electricity and more reliability.

Also in the works now is development of a quality plan. Mr. Carl said the production people will sign off on the work they did; afterwards, the quality control people will do the same. “When the cars are complete, then the customer [Miami-Dade] says whether we’ve completed our function and follows up to make sure all specifications are met.”

The first three cars will be turned over to Mr. Matthews for “qualification” and go through strenuous testing, Mr. Carl said. Once criteria are established, the test will be set for the subsequent cars.

Mr. Mirijello said the entire workforce at Miami’s first railroad-making facility is local. Two-thirds of the 30-member staff is in the group assembling the cars now, while the other 10 are in management/administration. Once the plant is at full production, however, he said, about 120 workers from Miami-Dade will be producing the new Metrorail vehicles.

“We’ve found a lot of local workers have aerospace backgrounds,” Mr. Mirijello said. He’s in the plant for the eight hours the workers are Monday-Friday as well as some Saturdays, and is always there with Mr. Carl, who rarely works less than an 11-hour day.

All 136 cars are slated for delivery by 2019, with the first expected by the end of this year. Those first new Metrorail vehicles are anticipated to go into service in late 2017, after completing their testing.