Advertisement
The Newspaper for the Future of Miami
Connect with us:
Front Page » Real Estate » Hundreds of rental apartments are coming to the Wynwood Arts District

Hundreds of rental apartments are coming to the Wynwood Arts District 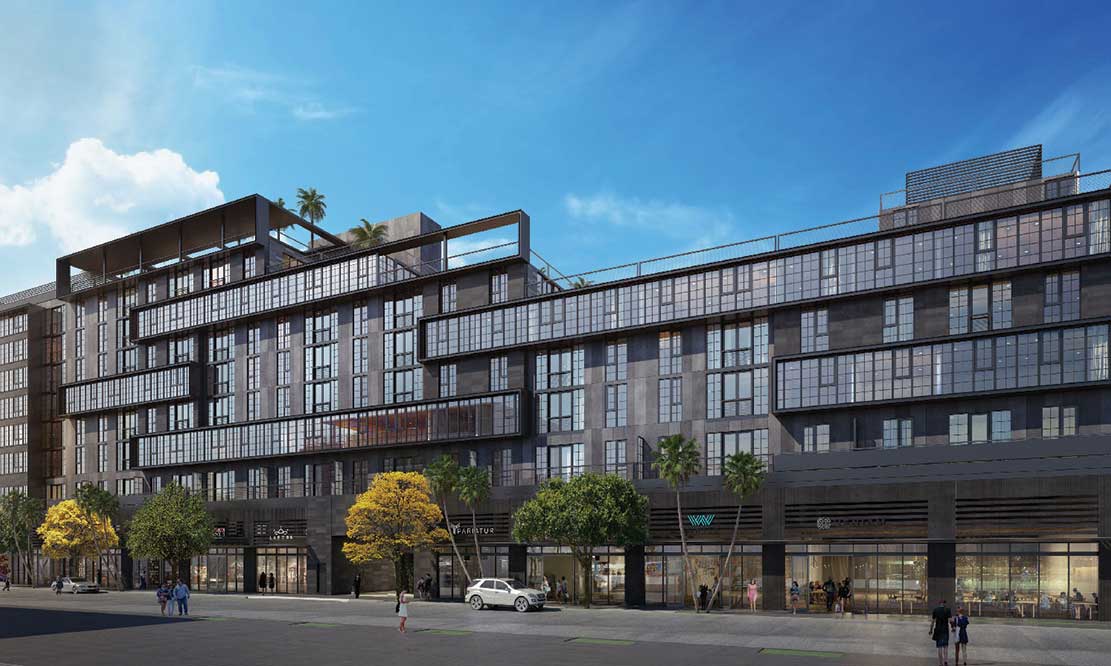 Hundreds of rental apartments are coming to the Wynwood Arts District, tucked inside a dark mixed-use structure that promises to celebrate art in many forms.

While Wynwood has been booming with new bars, shops, cafes, studios and other businesses, the popular venue has been lacking residences.

Wynwood 25 is prepared to help fill that need.

The project was evaluated Monday by members of the city’s Urban Development Review Board, who recommended approval on unanimous vote, with some conditions.

Due to inclusion of what the developer is calling a mezzanine level, some board members saw the proposal as a nine-story building on one end. The board asked that the developer clarify the height with city staff.

The project is included in an area covered by a new zoning overlay, Neighborhood Revitalization District-1 or NRD-1.

The NRD-1 legislation notes that “the city seeks to encourage reinvestment in infrastructure and seeks other creative solutions to create parks, open space, civic space, and civil support uses to allow for and facilitate new residential uses within the NRD-1 boundaries.”

A key component of Wynwood 25 will be a grand pedestrian paseo, a public walkway framed by art with subtle curves and very limited vehicle access for drop-offs.

Speaking of the paseo, board member Gerald C. Marston said, “I like its wiggle and I like its width.”

Another condition is that the developer re-evaluate the massing of the north façade and perhaps make it more similar to the proposed southern façade.

Developer East End Capital requested several waivers including permission to increase the lot coverage from 80% to 84%, allow vehicle access from a primary frontage and allow a 10% reduction of the required parking.

The project was also reviewed by the new Wynwood Design Review Committee, which recommended approval with conditions including incorporating more color into the ground floor, introducing art elements into the canopy, screening lights in the garage, using painted signs on the building itself and more.

Steve Wernick, an attorney representing the developer, said this project in the heart of Wynwood will help connect different parts of the neighborhood.

He said the building is eight stories tall at its highest, with some lower portions offering transition and an active amenities deck.

Jonathon Yormak, managing principal of East End Capital, told the city’s review board that his company has had its eye on Wynwood for several years and now wishes to offer “housing for the creative class.”

He said he’s really excited about the paseo, with its art elements in the floor, ceiling and walls. The project also includes a green space interior courtyard, he said.

Mr. Karp utilized the neighborhood context to inspire the design, noting, “The skin of the building is a reflection of the evolving and forward-thinking artistic and industrial DNA of the Wynwood Arts District.”

David Polinsky was wearing two hats at the Monday meeting. He said he is local development manager for the project and heads the Wynwood Design Review Committee.

He answered questions about the paseo and other items.

Mr. Polinsky said the paseo will be a one-way, single-lane street, north to south.

“This project really embraced the [Neighborhood Revitalization District],” he said.

“Think of it as a high-rise turned on its side,” Mr. Polinsky said of the building, with the façade broken up by ground floor retail uses.

Mr. Polinsky said the plan calls for two restaurants, and the paseo is designed wide enough to accommodate outdoor seating.

Board member Fidel Perez said it’s a nice looking building but doesn’t seem to fit in artsy Wynwood because it’s so dark.

“They felt it blended in,” Mr. Karp responded.

Board member Robin Bosco said he liked the form and appreciated the dark presence on higher floors, but felt more lively design at street level would improve the look.

Mr. Marston also noted the overall darkness of the building.

“This is an eight-story building that is dark. It doesn’t fit in the total context of Wynwood … lighten some of it,” he said.

The developer is looking at a targeted groundbreaking for the first quarter of 2017.

East End Capital said Wynwood 25 will feature highly-efficient, cost-conscious apartments.  It is expected that 80% of the units will rent for less than $2,000 a month.

The apartments, which will be predominantly studios and one bedrooms, will all feature 10-foot ceilings, luxurious kitchens and bathrooms, and full-sized washer/dryers, the company said.

In a prepared statement, Mr. Yorkmak said, “Wynwood is known for its cutting-edge art, world-class restaurants, creative office and hip retailers. Wynwood 25 marks the neighborhood’s next phase – an architecturally significant building that brings reasonably-priced rental housing to people who appreciate Wynwood’s unique character and want to be a part of the community.”

It is also to feature a landscaped roof terrace that includes a pool, spa, barbeque, outdoor and covered work areas, and green areas.

East End Capital says it’s one of Wynwood’s largest property owners and is committed to preserving and enhancing Wynwood’s artistic and creative community.

In addition to this project, East End Capital recently completed the Wynwood Arcade at 50 NW 24th St., which houses The Salty Donut, Bonobos, a new culinary and craft cocktail experience from Chef Norman Van Aken and other local boutiques.