Advertisement
The Newspaper for the Future of Miami
Connect with us:
Front Page » Government » Inter-American Conference of Mayors hits big issues 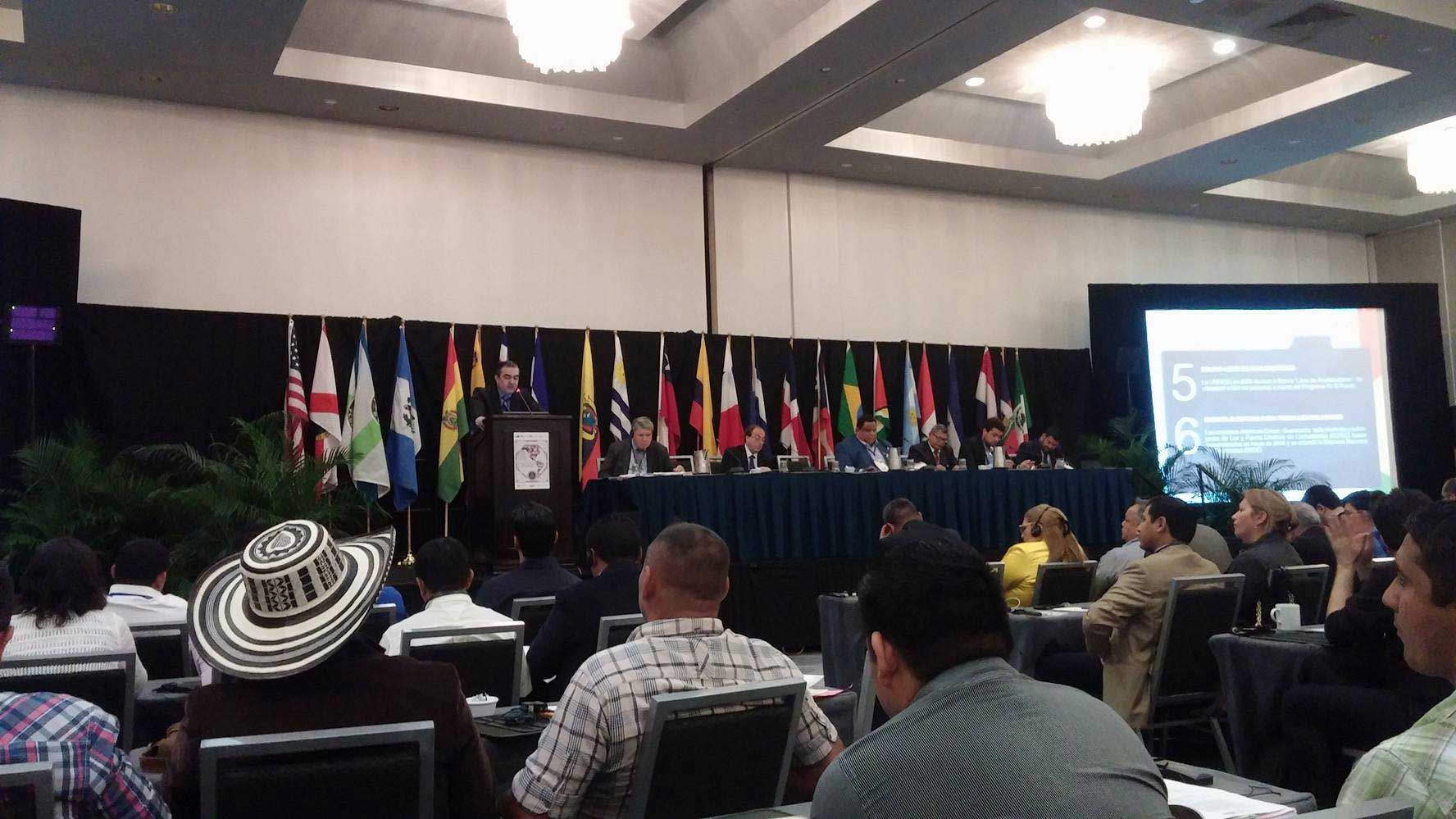 Miami is welcoming more than 600 mayors and local officials from across Latin America at the 22nd Inter-American conference of mayors and local authorities to discuss ways to improve municipal services and democracy and the key role of local governments in stabilizing and maximizing a nation’s strength.

Participants on Tuesday heard local government officials speaking about their experiences in their cities as mayors or their contributions in strengthening local governments.

For 22 years, Dr. Allan Rosenbaum, director of the Institute for Public Management and Community Service at Florida International University, has spearheaded the event, inviting officials, planning their stay and ensuring guests a platform to collaborate.

Mayors and officials took turns sharing experiences on what worked for them and what didn’t. Jorge Alarcon Olivares, acting deputy director of the National Institute for Federalism and Municipal Development of Mexico, expressed how important municipalities are to Mexico.

“Municipalities are good at providing service. If one municipality is weak, that makes the whole nation weak,” he said.

Mr. Olivares also said that in Mexico, an institute takes charge of local government consisting of 2,400 municipalities in 31 states. He also shared news on Mexico City, which has not been organized as a municipality but will be recognized as one.

“In the next few days, the City of Mexico will become state number 32, which will revolutionize Mexico,” Mr. Olivares said.

Lucas Nuñez del Prado, minister of autonomies of Bolivia, told the conference Bolivia is transitioning to an autonomous government and the only country where municipalities are autonomous.

“They do not come under the state, federal or local levels. It is totally independent, which has allowed them to establish a good working arrangement with the federal government,” he said. “All these principles, features and trade come from an urban community and is a way to counter individualism inherent to cities. We want a good living for all.”

The mayor of El Hatillo in Venezuela, David Smolansky, points to his country’s unrest and recurring gang violence as something local government can help address. With more than 252,000 deaths to uniformed officers and an inflation rate of 720%, the highest in the world, the pressure to start at a regional level is mounting, he said.

“Local governments are making serious moves to address the crises,” Mr. Smolansky said. “We have made public security our top priority as we have buried so many friends, it seems we are burying someone every day. This is a regional need that we need to address.”

“We are a league, an association of America’s cities. We are truly member-driven, we advocate for them on the national stage before Congress and the White House,” she said. “It is important know that cities and counties are still providing services when the federal government has come short in their responsibility.”

She praised the conference as a platform for city leaders to share ideas that can be applied to their own cities to be stronger.

“Cities are coming up with customized solutions for a better life for their residents,” Ms. Samuel said. “Gatherings like this are so important. No one nation has a monopoly on innovation. We want to learn from your cities and to share big idea innovations on what worked in your country. No matter where you are from, local governments get things done. We are problem solvers. When people bring problems to us, we don’t have the luxury to ignore the problem.”

“Many people say that the government isn’t productive and they are so very wrong,” he said. “Everybody in this room got here by flying on an airplane. Think about what made that possible… government scientists… The problem is so many people have forgotten just how central the activities of government are in maintaining and producing a good society.”

While Dr. Rosenbaum has been organizing the event for 22 years, the “father” of the event is Javier Souto, a Miami-Dade County commissioner. He first thought of the idea of a conference while eating picadillo with a mayor from a small town in northern-central Peru.

“We concluded we needed to launch a conference for mayor and local authorities right here as this was the right place to do it,” he told Miami Today.

The event has attracted thousands of mayors to Miami and not only helps countries advance the development of local government but also brings wealth and business opportunities to South Florida.

The Greater Miami Convention & Visitors Bureau awarded the conference the Miami Magnet Award for its contribution to the economic well being of Miami-Dade, as the event is estimated to generate about $1 million every year in hotels, restaurants, shops and airlines from participants.

“Florida has become a major launch pad for business, a major, major economic financial center,” Mr. Souto said. “Miami is the capital of the Americas. Nobody asks who or where they come from. Some come to do business or seek medical treatment; there is always a lot of activity… There are people from all races, a real cultural melting pot, and there is enough space and opportunity for all.”