Advertisement
The Newspaper for the Future of Miami
Connect with us:
Front Page » Government » Tri-Rail trains will roll into MiamiCentral

Tri-Rail trains will roll into MiamiCentral

Written by Catherine Lackner on May 31, 2016
Advertisement 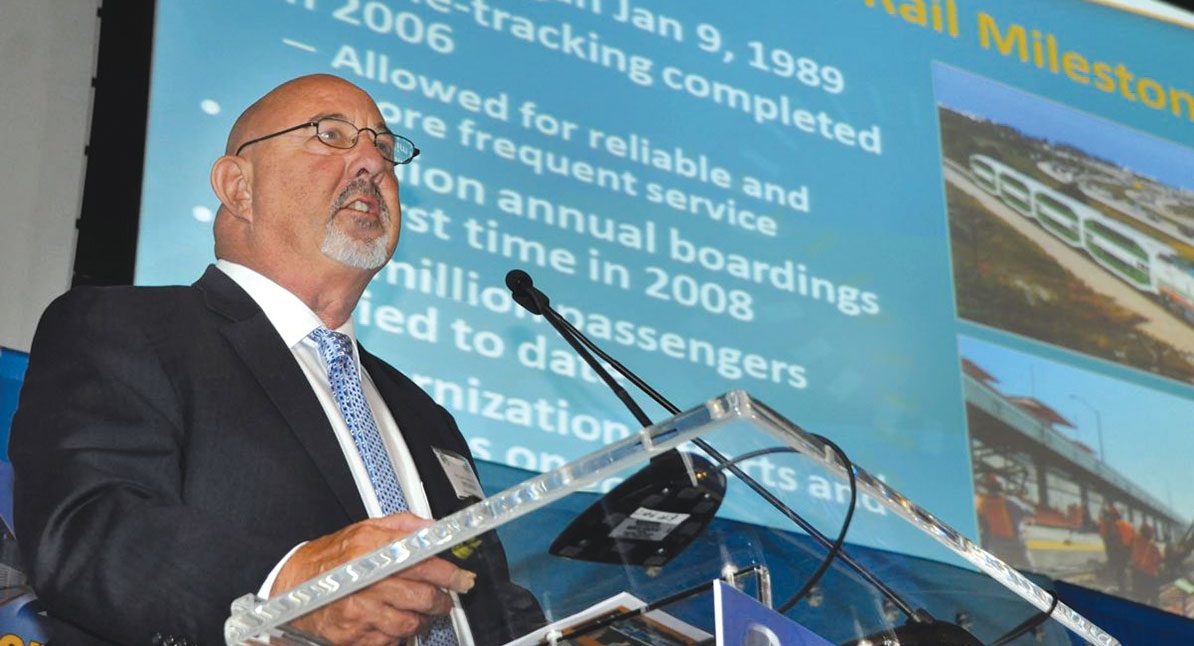 The South Florida Regional Transportation Authority’s governing board has voted to accept an agreement among local agencies that will allow Tri-Rail trains to roll into the new MiamiCentral station by the end of next year.

“It went very well,” said Bruno Barreiro, chair of the transportation authority’s board, Miami-Dade commissioner and a director of Miami’s Downtown Development Authority. “There were plenty of questions, but the feeling was ‘It’s about time.’ The board was very positive.”

“This puts us over the line,” said Jack Stephens, authority executive director. “Commissioner Barreiro ushered this through brilliantly, and the board stepped up and united behind him.”

Though there may be minor adjustment of contracts, all parties to the deal, which include Miami, Miami-Dade County, the Citizens’ Independent Transportation Trust, the Southeast Overtown/Park West and Omni community redevelopment agencies, the Downtown Development Authority and the Bayfront Park Management Trust, have agreed to honor their financial commitments so that the project can move forward.

The Florida Department of Transportation was to contribute $20 million but pulled out when the Legislature declined to pass an amendment that would have clarified the legal liability for the track that Tri-Rail and All Aboard Florida bullet-train service from Miami to Orlando will share.

But a unanimous Florida Supreme Court decision April 7 suggested that governmental agencies like the regional transportation authority can indemnify private parties, like All Aboard Florida, unless state law expressly forbids it.

The high court reversed an earlier ruling (Fla. DOT v. Schwefringhaus 2016) about an accident on a CSX Transportation crossing. An accident victim successfully sued the railroad over a crossing alleged to have not been maintained properly; the railroad then sued the transportation department based on a 1936 grade crossing agreement between them. The state transportation department claimed it had no responsibility, but the high court disagreed.

Both the transportation authority’s legal team and that of All Aboard Florida have accepted the decision as valid, Mr. Stephens said Friday.

The regional authority board’s Friday decision also puts an end to the threat that All Aboard Florida might withdraw its offer to have commuter service operate out of MiamiCentral.

All Aboard Florida, a wholly owned subsidiary of Florida East Coast Industries, “has advanced construction of the commuter rail platforms and is incurring significant costs since the station has gone vertical and columns have been erected,” said a May 2 letter from Alice Bravo, director of the county’s Department of Transportation and Public Works. “If we are not able to execute agreements, All Aboard Florida has advised us that they will be forced to cease construction on the commuter rail infrastructure. Without a definitive plan of action and inter-agency coordination to pursue new agreements, we could forfeit this unique opportunity to bring commuter rail to the central business district.”

2 Responses to Tri-Rail trains will roll into MiamiCentral