Advertisement
The Newspaper for the Future of Miami
Connect with us:
Front Page » Opinion » Soccer fields shouldn’t need detectives or rocket scientists

Written by Michael Lewis on May 24, 2016
Advertisement

A brand new Miami advisory board this week may probe “The Case of the Missing Soccer Fields,” the latest volume of government whodunits in which promises to voters vanish.

In this episode, Virginia Key soccer fields that were to open a month after the Miami International Boat Show left for the year never appeared. The city manager just told the Miami commission that they’ll never exist.

They join a long list of governments’ vanished vows.

Think of soccer fields at American Airlines Arena, home of the Miami Heat but never a home to soccer players who were depicted in promotions that got the arena built in Miami’s downtown. That land for soccer was diverted to other uses.

Think too of eight promised transit lines that a voter-approved sales tax was to build. Most of what the tax built was a pot of money that county commissioners diverted to other uses.

Think of the state’s lottery, which was to expand what Florida already spent for schools. The lottery cash went into the fund, but money that had been there was diverted to other uses.

The list goes on of pledges diverted to other uses, fueling suspicion of governments.

Now Miami’s new Virginia Key Advisory Board, just formed to plan for everything on the land linking the mainland and Key Biscayne, can advise the city how to deal with another bait and switch.

When the boat show left as the Miami Beach Convention Center was being rebuilt, Miami spent $20 million to prepare a site for the show beside Marine Stadium. But as edgy Key Biscayners and Miami taxpayers raised concerns, the commission agreed that the show site would be a vast flex park most of the year, featuring four soccer fields.

The rendering on this page was the city showpiece for what was to come. 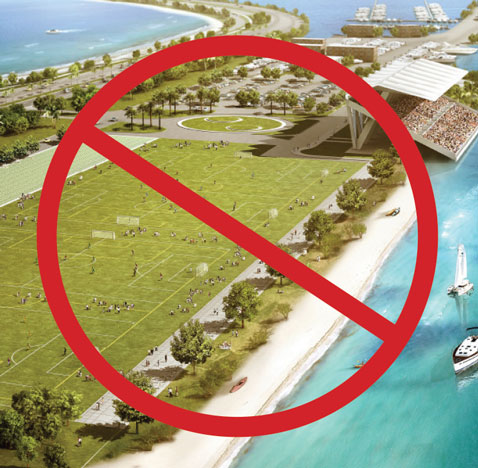 This month, however, City Manager Daniel Alfonso told commissioners there’ll be no soccer park. While commissioners had promised one and told staff to build it, he said “things came up” when the site was being prepared for the boat show.

Now, he says, because of a change in elevation it would be hard to turn the area into level playing fields “so we started looking at other options” – a series of events to be held there, the very result that Village of Key Biscayne officials warned last year was the city’s plan. Apparently, they were right.

Key Biscayne’s interest is vital. The Rickenbacker Causeway, which the site borders, is the only road to the village. Fill it with weekly events, villagers fear, and tough traffic turns to terrible.

Miami had promised last year that that would never happen. Now it appears regular events are Miami’s aim.

Soccer fields were never in a contract or an ordinance. As in most government bait-and-switch games, the public merely believed what officials promised. Silly us.

“Imagine a full-fledged soccer community out there,” then-commissioner Marc Sarnoff said at the time. We can imagine it, but the city manager can’t.

The manager says a soccer park wouldn’t be level. We don’t think that’s on the level. A society that can shoot rockets into space can figure out how to build a flat soccer field – or four of them. If it increases what the city spends on the site, that’s the cost of keeping faith with voters.

Actually, we don’t have much against a weekly show or event on Virginia Key if that’s what was pledged when the boat show deal was sealed. But the city promised the opposite, just as we were promised that we would get new transit from a tax that was spent instead to give employees raises and fix clunker buses. We aren’t against raises or fixing buses, but we favor keeping vital vows.

Now a broken promise goes to a new board whose focus is Virginia Key’s future.

Board members can duck the park issue, sealing the board’s future as a paper tiger.

Or they can tell the public to vote the rascals out or tell commissioners to fire the manager, both of which would be inappropriate.

But what they should actually do is advise the city to find a way to make playing fields flat, which sure isn’t rocket science.

Commissioner Keon Hardemon said this month of the soccer site that “it was part of the deal.” He’s absolutely right. That’s how the boat show was sold.

The commission needs to keep faith with that, telling Mr. Alfonso not to come back as he plans with a menu of fundraising events at the site but with a detailed plan of how to build the soccer fields and the cost.

If necessary, the city should ask experts. It doesn’t have to go as far as Cape Kennedy to find someone who can design flat soccer fields. It’s not rocketry, just keeping the faith – or restoring it.

And we certainly shouldn’t need a detective to find the vanished fields.