Advertisement
The Newspaper for the Future of Miami
Connect with us:
Front Page » Real Estate » Riverwalk for new 69-story tower nears 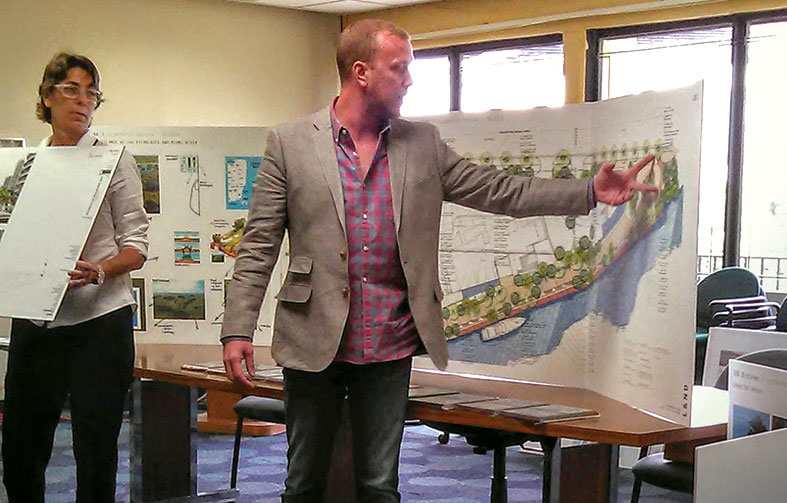 The developer planning a sleek condo tower at the mouth of the Miami River has finalized plans that are to result in a permanent, improved and lushly landscaped public riverwalk.

And if plans move forward at the current pace, a temporary riverwalk could open that section of the riverfront to the public in about 90 days, according to a representative of Riverwalk East Development LLC.

The Miami River Commission on Monday unanimously recommended approval of the final site plan, which shows a public riverwalk with a width of at least 15 feet of unobstructed pathway extending about 480 linear feet along the river.

The land had been part of the development plan that resulted in EPIC Residences & Hotel, a luxury high-rise built on the site of the former Dupont Plaza.

A three-story temporary sales center building has sat on the property for more than seven years, with companion fencing and landscaping effectively cutting off a high-profile area of the river downtown.

Plans call for the temporary structure to be reduced in size and spruced up to serve as a sales center for the new condo tower that is to take its place.

While complaining the old sales office had far outlived its “temporary” status, river commission members on Jan. 4 recommended approval of a new temporary use permit for the building.

If approved by the city, the proposal would mean a slightly smaller, remodeled version of the temporary building could remain there up to three more years.

The January vote was tied to a promise of a temporary public riverwalk.

River commission officials and related review committee members have stressed to the developer the unique nature of this site, as it represents the start of the riverwalk, just a few yards from where Biscayne Bay joins the river.

EPIC was built under the city’s former zoning code, and as part of a Major Use Special Permit. Developer representatives have said the new plan stays within the construction limits set on the special permit and no amendment is needed.

The current plan is smaller than what was originally planned for the site, said Ms. Escarra. The earlier plan included a tower with 596 residences and parking for 621 cars. The new plan has a parking pedestal for 561 vehicles.

Ms. Escarra explained Monday that an earlier version of the plan called for a riverwalk that had some areas “pinched” to only 12 feet wide. The final plan includes 15 feet of width the length of the property, she said.

The permanent riverwalk is to connect with existing riverwalk at the mouth of the river to the east, and under the Brickell Avenue Bridge to the west, and past EPIC.

Mr. Lewis spoke of the unique setting and the valuable vista and views. He said the views are “quite spectacular” and the landscape plan takes that into consideration.

“We have the chance to set a standard,” Mr. Lewis said.

With a goal of capturing the essence of the tree islands of the Everglades, Mr. Lewis said he set out to recreate the system of the water flowing in and around an area. In this case, the public – pedestrians, cyclists, runners and others – represent the water flowing through the site, he said.

Native trees and plants will accentuate the natural space and bring in birds, butterflies and people, he said.

The main event is an unobstructed walkway 15 feet wide, with bench seating and shaded areas throughout, he said.

When commission members voted during a roll call vote, member Patty Harris said, “Yes – with a thank you for the 15 feet.”

As a condition to the vote, the developer agreed to preserve the temporary riverwalk until a permanent riverwalk is constructed.

This came up after Vice Chairman Jay Carmichael asked what would happen to the temporary riverwalk if for some reason the condo tower is not built or is delayed.

Dr. Ernie Martin, a commission member, said he wanted to get it on the record when the developer planned to build the temporary riverwalk.

Ms. Escarra said permit requests have been filed and she anticipates getting an OK on permits within 30 days. Construction of the temporary riverwalk may take four to six weeks, she said, so her projection for a completed riverwalk was within 90 days.

The river commission’s January vote was also conditional: the sales center must be demolished within three years of approval of the new temporary use permit, and within 10 days of issuance of the permit the owner must post a bond, letter of credit or cash escrow of $100,000 to insure demolition of the sales center.

During the anticipated three years needed for permitting and construction of the tower, the temporary riverwalk would be closed only during periodic construction deemed hazardous to the public, according to the developer. “In those instances the owner shall coordinate the closing with the City of Miami.”