Advertisement
The Newspaper for the Future of Miami
Connect with us:
Front Page » Real Estate » Build it bigger, Miami review board suggests 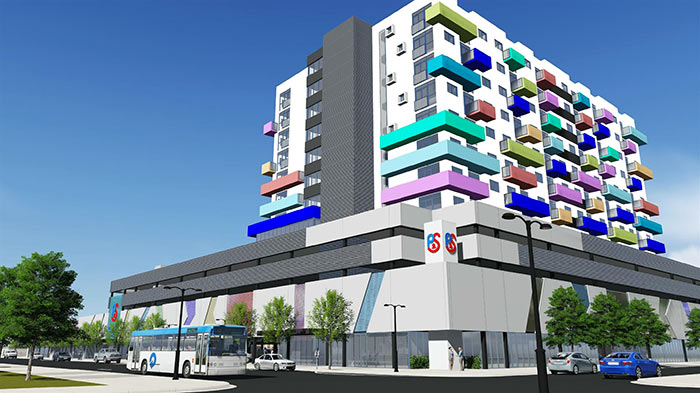 In a rare move, a Miami review board has sent a developer and his architect back to the drawing board after board members complained that a project isn’t big enough.

Main criticisms leveled at the mixed-use Eight and First Development were lost design opportunities, an uninviting corner for ground-level commercial space, a busy façade color scheme and failure to take full advantage of the workforce housing potential that zoning permits.

The plan from Eight and First LLC would bring a grocery store and 96 rental apartments to the Little Havana neighborhood. But zoning would allow 312 apartments, and the city’s Urban Development Review Board would like more.

The board deferred the plan for a high-profile site at 45 SW Eighth Ave., on the northeast corner of Southwest Eighth Avenue and First Street, after considering recommending its denial. The board advises the city’s planning director.

On a motion from Dean Lewis, the board voted Feb. 17 to defer the project, a maneuver that will allow the developer to return with a revised plan.

The architect for Eight and First Development is Herman Chaviano with DTI Architecture.

Mr. Chaviano told the board the original plan for the vacant site was limited to a one-story supermarket to “improve and enhance the area.”

The site plan for the food store went through the entire review and approval process, he said.

But the developer was advised that the site could hold much more than a supermarket.

The plan was changed to add a 12-story residential building with 96 units and a 311-space garage, along with the nearly 45,000 square feet of commercial space, with about 35,000 devoted to a Presidente Supermarket.

The residential building is accented with panels, balconies and corner pieces in bright colors defined by Mr. Chaviano as “the colors of Miami.”

The ground floor is anchored on the corner by the supermarket, and the landscaping would include palm and shade trees.

The goal was to “enhance the pedestrian experience in that area,” said Mr. Chaviano.

“It leaves a lot of opportunity on the table,” said Mr. Lewis, noting that the project could include up to 312 apartments.

Mr. Lewis said he also wanted to talk about the elephant in the room: the use of rainbow colors. He said the design relies too much on paint. “Paint is only so good for so long,” he said.

Mr. Lewis also suggested reconsidering the design of the courtyard and the articulation of the supermarket.

“For the retail, you failed to express the corner. The supermarket needs more than a blank wall,” he said.

He said he didn’t feel comfortable recommending approval, especially since “it’s such an important location.”

In regard to the supermarket, Mr. Lewis said, “It doesn’t evoke food and freshness.” He suggested “create something new.”

Board member Neil Hall furthered that idea, encouraging the architect go to Presidente Supermarkets and work with the company to try a new look.

“There is a chance here for new models and designs,” Mr. Hall said. “You have an opportunity.”

7 Responses to Build it bigger, Miami review board suggests