Advertisement
The Newspaper for the Future of Miami
Connect with us:
Front Page » Opinion » Commission thumb tips scale toward bad airport business

The bad old days at Miami International Airport weren’t so long ago that we can ignore a county commission move to reassert control over retail and dining choices.

This month, commissioners told officials to sign no-bid leases with two specific food purveyors, get them prime space for 10 years and be certain that they don’t fail.

That order backed the airport into a corner. If your boss orders you to lease to someone and the other side knows it, you have no leverage. The tenant can win terms that others could not because the airport can’t say no.

Remember the $3 billion sweetheart deal for Marlins Park? The county manager had to cut a deal that elected officials demanded, so Marlins owners knew they could ask for virtually anything and get it. They did so, in spades.

To a lesser degree, that’s what happened when commissioners demanded that Jackson Soul Food and Chef Creole get prime airport space and not fail – a guarantee that no other business gets from anyone. That can lead to low rent, easy terms and subsidies for 10 years.

No matter how good these tenants are, they get a free head start that nobody should get.

Now, handling Miami International Airport’s retail slots has always been tricky. Everybody wants to get in because of the huge foot traffic, but space is limited.

The airport is a mall that has no expansion room but rapidly growing traffic – more than 44 million passengers in 2015, up 10% in one year. What mall gains that fast?

In the past, airport tenant selection was political, with a few insiders controlling most food and store operations. 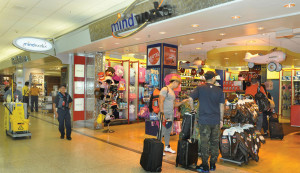 Customers now are frequent and plentiful at nationally-known retailers at the airport.

These powerhouses kept out national names, leaving Miami International with a dull blend of profitable generic stores that had a virtual monopoly.

In the past decade the grip on airport space has loosened, to the benefit of big-name, high-quality national tenants that make the airport far more cosmopolitan and inviting, while the local flavor has been retained as airport staff curated local standouts to achieve a good mix.

That’s vital to the airport for several reasons. One is to provide a top passenger experience, keeping Miami a quality gateway that lures more and more traffic, as the airport clearly has done.

But the airport has another practical reason to keep retail strong and alluring: it gets a cut from tenants, generally 15%, that helps cover operating costs.

That cash is vital. Taxes don’t pay airport costs. The money comes mostly from leases and from fees that airlines and cargo operators pay.

The more of the load retail can lift, the less the airport must get from airlines and thus the less travelers pay for tickets. Added tenant income can help lower landing fees, making flights to Miami more affordable compared with competitors.

In a county whose top industry is visitors, that’s vital.

As it is, we’re far behind nearby Fort Lauderdale-Hollywood International Airport, where in 2014 the cost per passenger was $4.52 versus Miami’s $20.56. Our rate was $20.14 in 2015, going down to $20.13 this year, but the gap with Broward is still huge – a gap that airline passengers ultimately fund, putting us at a competitive disadvantage of more than $15 per ticket on every flight.

Low-cost airlines fly their growing passenger loads to places where landing costs are also lower. They cluster in Broward, not Miami.

So any tiny thing that reduces tenant revenue – like sweetheart leases that don’t maximize income – adds pressure on airlines and passengers to pay more, and makes Miami a bit less attractive.

Granted, these two small retail leases won’t be a blip on the radar even if they simply give away the store. But tilting the balance is a bad precedent.

That should concern not just businesses and residents but also the Federal Aviation Administration, which safeguards airport resources, since airlines fund shortfalls. In the past that agency ordered the airport to stop wasting revenue when commissioners ordered airport funds spent on parades and festivals.

While these leases aren’t even a drop in the revenue bucket, neither were the parades and festivals the last time the feds cracked down.

Please note that the airport was already negotiating with Jackson Soul Food and Chef Creole before commissioners on Feb. 2 ordered no-bid contracts with no-failure oral add-ons. Clearly, these are tenants the airport was interested in and might be great additions.

But when commission orders upset the balance of business deals it’s almost always bad business. A commission thumb on the scale tilts the cost balance and moves a step back toward the bad old days in airport retail.

Trying to help two good businesses by commission order is not helpful.