Advertisement
The Newspaper for the Future of Miami
Connect with us:
Front Page » Top Stories » Gambling power Genting to build Miami baywalk 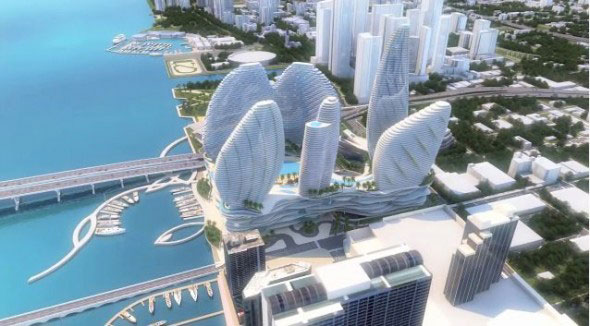 Miami city commissioners are adamant about securing an improved public baywalk on the waterfront downtown and beyond.

Early last month commissioners approved a resolution calling on the Florida Department of Transportation to provide a baywalk underneath I-395 as part of its $600 million improvement project on the elevated highway.

The topic resurfaced at the commission’s meeting last week.

Gus Pego, local district secretary for the transportation department, was there with a status report on I-395 project.

The highway connects I-95 with the MacArthur Causeway over Biscayne Bay and is hugged on the north by a large vacant parcel that was home to the Miami Herald for decades, and on the south by the Pérez Art Museum Miami and the city’s Museum Park.

The city’s resolution says that a public baywalk connecting Museum Park and the former Herald site would allow enhanced connectivity to Biscayne Bay for the benefit of pedestrians, residents and tourists.

Providing a baywalk promenade “allows for increased usage of the vibrant waterfront and public spaces within our downtown,” the resolution reads.

As part of the massive I-395 project, the department of transportation has had a series of property exchanges with the City of Miami, Miami-Dade County, and the owners of the old Herald site, Genting Group.

The Malaysia-based company purchased the 14-acre newspaper site in 2011 for $236 million. It purchased surrounding properties and announced plans for Resorts World Miami, a sweeping $3 billion luxury casino with multiple towers, stores and an elevated beach and lagoon.

Without winning OK for a casino, the plan was scaled back to two residential towers, a hotel and retail. The company has been in a holding pattern for years. There was a land swap between the developer and the state about five months ago, as part of the preparation work for the I-395 project.

Draft plans for the prime high-profile site have included an 800-foot waterfront promenade along Biscayne Bay and a marina.

Mr. Pego told commissioners last week that Genting will build the baywalk under I-395 as part of its marina, called for in an agreement with the transportation department.

The shoreline in that location would require that the baywalk be extended eastward – “they need to jog out into the bay,” he said. Genting would lease property under the highway and bottomlands to extend the baywalk as part of its marina, he said.

The information is consistent with moves made by Genting in 2014 to have old easements removed from the former Herald site. Commissioners had questioned the impact of removing the easements.

City staff said the Miami 21 zoning code would require a baywalk when the parcel is redeveloped.

Commissioners wondered if acceptance of a proposed new plat for the area – entitled Resorts World Miami One – would undo the requirement for a public walkway.

Ms. Garcia-Toledo had said a previous property owner, Knight-Ridder Newspapers Inc., got an exception not to have to build a baywalk. That’s one reason the area was replatted, she said, “to remove that restriction.”

Without offering specifics of the proposed development, Ms. Garcia-Toledo said a full baywalk is part of its design.

Early on, Genting said Resorts World Miami would “serve as a connecting point between the Adrienne Arsht Center, Museum Park, and Margaret Pace Park. This will open up the waterfront to the public and revitalize the Omni neighborhood.”