Advertisement
The Newspaper for the Future of Miami
Connect with us:
Front Page » Real Estate » Riverwalk could give illegal building new life 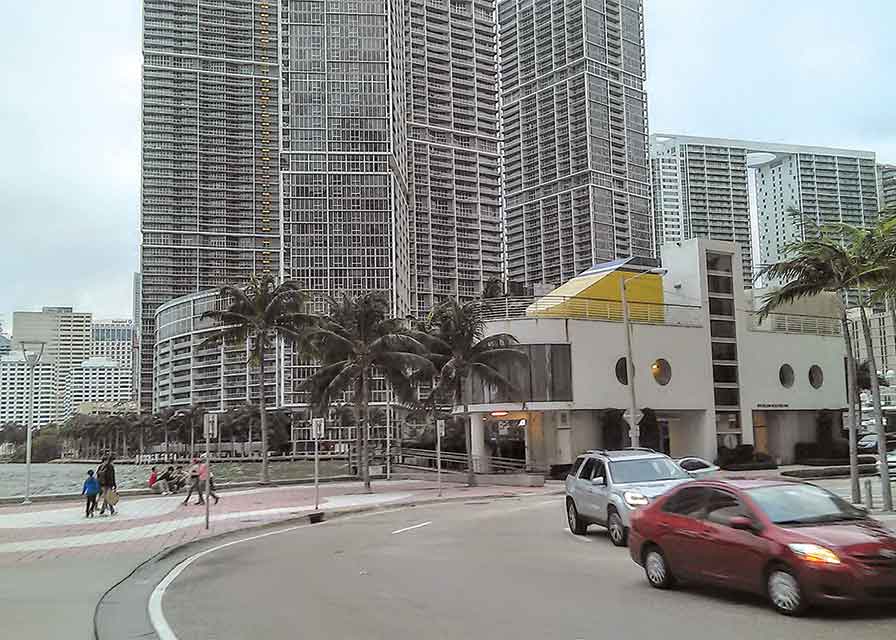 A developer who plans a luxury condo tower at the mouth of the Miami River is willing to extend the public riverwalk westward to EPIC Residences & Hotel right away, opening up a section of the riverfront denied to the public for years.

In return, the developer hopes to get a life extension for a three-story building that was always supposed to be temporary and has far outlived its approved time limit, at 250-300 Biscayne Boulevard Way.

The Miami River Commission on Jan. 4 recommended approval of a new temporary use permit for the building, which was used as the sales center for EPIC, a luxury high-rise built next door on the site of the former Dupont Plaza. The river commission’s support of the proposal is conditional.

If approved by the city, the proposal would mean a slightly smaller, remodeled version of the temporary building would remain there for up to three more years.

Today, the improved and landscaped public riverwalk extending from Bayfront Park wraps around the InterContinental and One Miami Condominium and ends abruptly at the old sales center site.

The latest proposal would extend the riverwalk west along the entire site, connecting with a portion of the riverwalk abutting the EPIC site and extending west under the Brickell Avenue Bridge, which winds its way to the South Miami Avenue Bridge.

In December, a representative of the developer proposed a temporary riverwalk along the site for about one year, after which the developer planned to closed it off again to the public while the tower was built.

The proposal presented to the river commission Jan. 4 calls for a temporary riverwalk not less than 5 feet wide along the entire site until the tower is completed and a permanent riverwalk built.

The ultimate benefits, once the new tower is complete and the sales center is demolished, will be an improved and landscaped public riverwalk with widths ranging from about 11 to 30 feet, and removal of electric transformers and high hedges along the riverfront, according to the developer.

In addition, tall and thick hedges along Biscayne Boulevard Way will be cut down to 4 feet tall to offer more open views of the waterfront.

The owner-developer, from Argentina, would have to include a complete and permanent riverwalk along the water’s edge as required by city code.

During the anticipated three years needed for permitting and construction, the riverwalk would be closed only during periodic construction deemed hazardous to the public, according to Lucia A. Dougherty, an attorney representing the developer.

One written condition says the riverwalk “will be open to the public except in the instance when construction creates a hazard for the public. In those instances the Owner shall coordinate the closing with the City of Miami.”

Architect Barbara Pederzoli said, “The intention is to keep the riverwalk open as long as we can.”

Frank Carollo, a Miami city commissioner and member of the river commission, asked the project architect if there were drawings of the remodeled sales center.

Ms. Dougherty said the project will be a “very upscale” residential tower and “we’ll make sure the sales center looks pretty good.”

Mr. Aguirre asked, how river commission members can explain to the public “how we let it go five, six, seven years.”

The City of Miami found the three-story nautical themed structure in violation of the city charter and zoning code waterfront development setback requirements several years ago and ordered that the building be demolished, according to river commission officials.

The parcel changed hands last summer when Riverwalk East Developments LLC bought the 1.25-acre site for $125 million, a record for a property of that size in South Florida, according to broker CBRE.

River commission members debated the width of the temporary riverwalk, with some objecting that 5 feet would be too narrow.

Manny Prieguez said he’d be willing to “give them 5 feet now” to aid in construction, in order that “at the back end we get something decent.”

“That’s my opinion, too,” said member Ernie Martin. “The developer has recognized that the river has economic value.”

At the committee meeting in December, Dr. Martin said the river commission had an “ambivalent relationship” with the previous property owner, who did not remove the temporary building when ordered.

The continued existence of the structure “blocks the continuity” of the city’s growing and beautiful riverwalk, said Dr. Martin, who was encouraged by the proposal to extended the riverwalk.

At the Jan. 4 meeting, Dr. Martin noted the “long history of grievances” with the former property owner and that the sales center has been “a sore thumb to us for so long,” but said now there is “a new day and a new owner.”

“In the end [we get a riverwalk] that ties seamlessly at both ends… from EPIC to Museum Park, we’ll have a clear [walkway] on the water,” Mr. Barreiro said.

Other conditions in the river commission resolution include that the sales center must be demolished within three years of the approval of the new temporary use permit, and within 10 days of the issuance of the permit the owner must post a bond, letter of credit or cash escrow of $100,000 to insure demolition of the sales center.

The site at 250-300 Biscayne Boulevard Way is part of an earlier approved Major Use Special Permit under city zoning rules, as part of the EPIC project. That special permit will need to be amended for the new owner to begin construction.

More detailed plans for the tower itself are to come back before the river commission and its committees for review and comments later this year.

The overall goal of the riverwalk is to extend a public pathway from Biscayne Bay west and northwestward to an area near Miami International Airport, on both sides of the river.