Advertisement
The Newspaper for the Future of Miami
Connect with us:
Front Page » Opinion » To persuade Gus to hop back on the bus, upscale its image

To persuade Gus to hop back on the bus, upscale its image

In 1975 Paul Simon wrote the enduring lyrics “Hop on the bus, Gus.” Enduring elsewhere, but not in Miami-Dade, where we’re hopping off the bus by the millions.

Despite traffic that grows rapidly worse, fewer and fewer of us will board a bus. Comparing 2008 with last year, the county tallied 12,388,813 fewer bus rides – a steep 14.6% plunge. Much of that drop came before gas prices fell.

Think of it: more than 12 million times last year people who once rode a county bus decided not to.

And the trend continues: in October, the first month of the current fiscal year, 10% fewer people rode the bus than in October 2014.

This is not a blip – this is a rush out of the bus.

Metrorail and Metromover serve small slices of the county but more of us now use them. Buses, which blanket the county and still account for more than two-thirds of all transit rides, are getting a resounding thumbs-down.

That should frighten the heck out of you. We’re cramming a rising population onto the same roads just as more and more of us abandon buses and also take to the road. 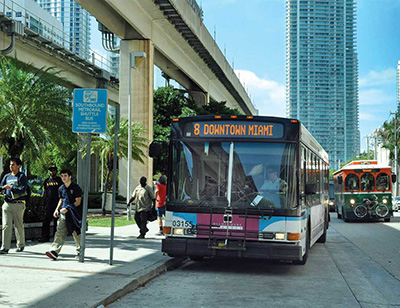 There are three possible reasons buses are failing:

1. They’re the wrong way to get around. They merely clog already congested streets.

2. Our system isn’t run well. Buses are infrequent, serve the wrong areas, are unpleasant and all the other complaints that riders voice.

3. Buses aren’t sold well enough. They have a lousy image, including the root meaning of lousy.

Unfortunately, we need buses. Even if we prefer rail, it could never handle all the nearly 106 million public transit trips taken in Miami-Dade last year. Buses must remain our transit backbone – and we have an aching back.

But that brings us to the third pillar of transit success: image. Reverse the image and you reverse the trend of riders hopping off the bus in droves to become more drives.

The classic case of image is riders who hop off buses only to hop aboard those cute trolleys that cities operate with funds from our half percent countywide transit tax.

Why is bus riding a pain while trolley rides aren’t? It’s partly that trolleys are free. But the big reason trolleys are winners and buses are losers is image.

Trolleys are attractive, buses aren’t. You might ride a trolley but probably not a bus unless you had no choice. Trolleys (really just buses in makeup) are old-timey and cute, filled with people like you.

Manhattan’s well-dressed executives and theatergoers ride buses regularly but when they’re in Miami they wouldn’t dream of boarding our buses. Image.

As long as we think the bus is not for people like us but for “them,” the only people who will ride buses are those with no choice.

In national studies, the image of bus riders is people who can’t afford a car or gas, the elderly, the disabled, youngsters and students, those riding to menial jobs, those of low income, minorities, and people who are “not like me.”

On the other hand, trolley riders seem to be “just like me” and trolleys fill up. And people don’t feel that they’re too good for Metrorail and Metromover, where ridership is growing.

The county can shift bus routes, increase frequency, upgrade shelters, add reliability, educate the world on routes and speed up buses. All that can help.

But if you want Gus to hop on again, buses need a complete image makeover, from their looks to expanding the kinds of people who are willing to ride.

A few months back Art Noriega, who runs Miami’s parking system, vowed to use nothing but public transit for a month to check out how it works. Unless we can get those who run a lot of other things around here to hop onto the bus themselves, the image that buses are “not for people like me” will only get stronger and the Guses will keep hopping off – right onto those congested roads.

2 Responses to To persuade Gus to hop back on the bus, upscale its image