Advertisement
The Newspaper for the Future of Miami
Connect with us:
Front Page » Transportation » Land swap can get I-395 bridge rising

Land swap can get I-395 bridge rising 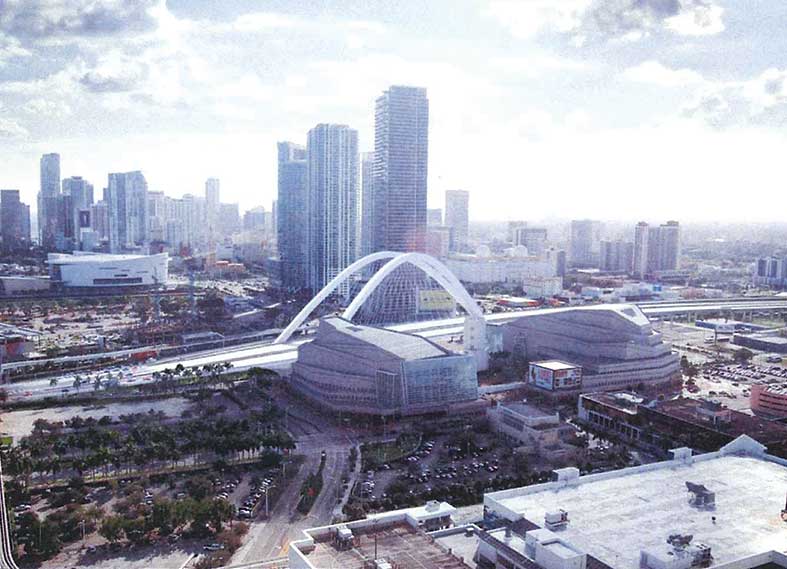 A committee is this week to approve exchanging county-owned land for a few Florida Department of Transportation sites so the state can reconstruct I-395 with its planned signature bridge from west of I-95 to the MacArthur Causeway while the Adrienne Arsht Center for the Performing Arts maintains its view and receives space for parking in a nearby community park.

The placement and setback requirements of the Florida’s Department of Transportation’s (FDOT) long-awaited signature bridge and the performing arts center’s evolving need for parking would be accomplished with the proposed land swap, according to a memo by Michael Spring, senior advisor to the mayor and director of Miami-Dade’s Department of Cultural Affairs.

The exchange would be for a county-owned 60,170-square-foot parcel south of Northeast 13th Street between Biscayne Boulevard and Northeast Second Avenue for the FDOT-owned property totaling 61,904 square feet immediately west of the county’s land between Northeast Second and First avenues.

Based on appraisals by the transportation department, the sites have an equal value of $27.8 million.

The swap would require the transfer of Safe Neighborhood Parks grant requirements from the land the county would give to FDOT to the one it would receive from the transportation department.

Additionally, the legislation to come before the county commission’s Economic Prosperity Committee today (1/14) asks for the release of a restrictive covenant for the county’s parcel to clear the title as well as recording a new one on property at 1300 Biscayne Blvd. where the arts center sits to correct the mistakenly identified address to the Arsht Center itself, a condition of the $750,000 grant awarded by the State of Florida Regional Cultural Facilities Grant program for the center’s construction in 2006.

This would preserve the view corridor at the front of the Arsht Center’s Ballet Opera House by restricting any permanent buildings from being put up on the property that would obstruct it.

Should the resolution pass committee, an amended and re-stated operating managing agreement with the Arsht Center, giving it additional authorization to use the exchanged property for parking and 35% for open park space, will be forwarded to the full commission for its approval.

According to Mr. Spring, FDOT’s planned signature bridge as part of the upgrade of I-395 will “become an icon for the South Florida community.”

Other county officials, however, have discussed specific challenges as well as whether the project should be sidetracked.

Miami City Commissioner Francis Suarez, a member of the Metropolitan Planning Organization and vice chair of its Transit Solutions Committee, suggested to the committee in December that the project be delayed and the funds be used instead for mass transit.

“The city has been pushing for a signature bridge on I-395, which will cost $800 million,” he said during a meeting. “There’s nothing really wrong with [the current bridge]; it’s not a bottleneck and it doesn’t need to be done right away.”

Instead, Mr. Suarez suggested the $800 million would pay for Miami and Miami Beach’s portion and half of Miami-Dade’s for the Baylink rail system to connect the two cities across Biscayne Bay.

“I look at this as an anti-parochial idea,” he said, pointing out the signature bridge would be entirely in the City of Miami. “This is looking more on a regional level.”

5 Responses to Land swap can get I-395 bridge rising