Advertisement
The Newspaper for the Future of Miami
Connect with us:
Front Page » Real Estate » Miami office market becomes magnet to investors 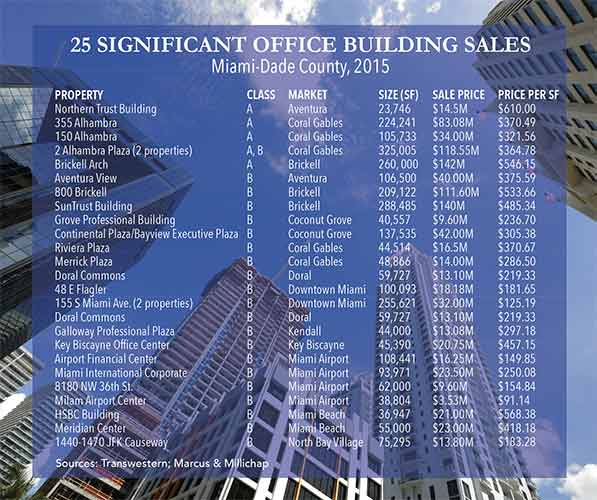 Miami’s high-performing office market has become a magnet to institutional and foreign investors, brokers say, and the competition is causing top-tier buildings to trade for record prices.

“Office-market sales are very strong,” said William Holly, president of Patton Real Estate, “with lots of new properties coming on the market. The biggest thing is the premium being paid for core properties in core locations that are fully amenitized.”

For example, Alex Zylberglait, senior vice president in Marcus & Millichap’s Miami office, reports the sale of the Northern Trust Bank Building in Aventura for just over $610 a square foot, one of the highest levels ever recorded in that area.

Transwestern’s Real Estate Outlook for third quarter 2015 reports that the average price for suburban class A offices exceeds $35 a square foot, an historic high – and average rates in class A buildings in the urban core are hovering in the mid-$40s.

Brokers say lease hikes, in turn, are being nudged northward by falling vacancy rates. Transwestern’s Outlook reported an eight-year low in direct vacancy at the end of the third quarter, registering just over 13% in competitive class A and class B office stock.

“Office buildings are driven primarily by employment,” Mr. Zylberglait said. “A decreasing unemployment rate and strengthening employment market means hiring is up, and that has driven an increase in demand for office space and absorption.”

Though with the recovery of the economy many employers haven’t hired to previous levels, Mr. Holly said, they still need more space – and the trend is abetted by the lack of significant new inventory.

“There is virtually no new product in the market,” Mr. Zylberglait said, “and some of the existing inventory has been depleted by office condo conversions and the repositioning of existing office space to other products in areas such as Edgewater and the Biscayne corridor,” where office sites were bought to be torn down and redeveloped for other uses.

After rising lease rates, Mr. Bell said, the announcement of an imminent rise in the interest rate is also pushing sales activity. “We don’t expect the interest rate to rise significantly,” he said, “to where it will affect cap rates,” which he quoted at 3.5% to 4% in the central business district, another historic low.

“With interest rates as low as they have been, investors can justify high prices for these assets,” Mr. Zylberglait said, “because that fuels their ability to finance it. And people will want to lock in these rates before they go up further.”

One interesting feature of the current run on Miami-Dade office properties, Mr. Bell said, is that it’s not limited to trophy towers in the Brickell-downtown core.

“Coral Gables is a very strong second in terms of interest,” he said, “and Doral is turning into quite a market of its own. It’s not just industrial anymore. There are extremely high levels of institutional and foreign capital waiting to invest in office and retail. Anywhere there’s a deal with a Miami-Dade address, people are interested.

“Though quite a few transactions have occurred, given we’re still at top of the cycle we will probably easily see at least one tower in Brickell and another in downtown trade in the near future. Institutional money and private money are taking a strong look at getting while the getting’s good.”

In Brickell and Coral Gables particularly, Mr. Holly said, “in the first quarter I would expect to see more good properties come on the block to capitalize on this good market.”

Buyers for class A and larger class B properties are mostly institutional, he said, and “we have a healthy international market here for sales up to about $20 million.”

“A strong influx of Latin American capital going after smaller properties has magnified the velocity of transactions,” Mr. Zylberglait said. “Foreign buyers now have more financing available to them, and they see US commercial properties as great diversifiers for cash flow.”

The foreign market, Mr. Bell predicts, is about to get even stronger.

“President Obama recently signed legislation that took away the 1980 Foreign Investment in Real Property Tax Act, known as FIRPTA,” he said. “In the past foreign investors were taxed on investments in the US and couldn’t be majority holders. So they were hesitant to get involved in assets they couldn’t have much control over.

“This is going to be really huge for Miami.”

One Response to Miami office market becomes magnet to investors