Advertisement
The Newspaper for the Future of Miami
Connect with us:
Front Page » Transportation » Questions fly on new I-395 bridge

Questions fly on new I-395 bridge 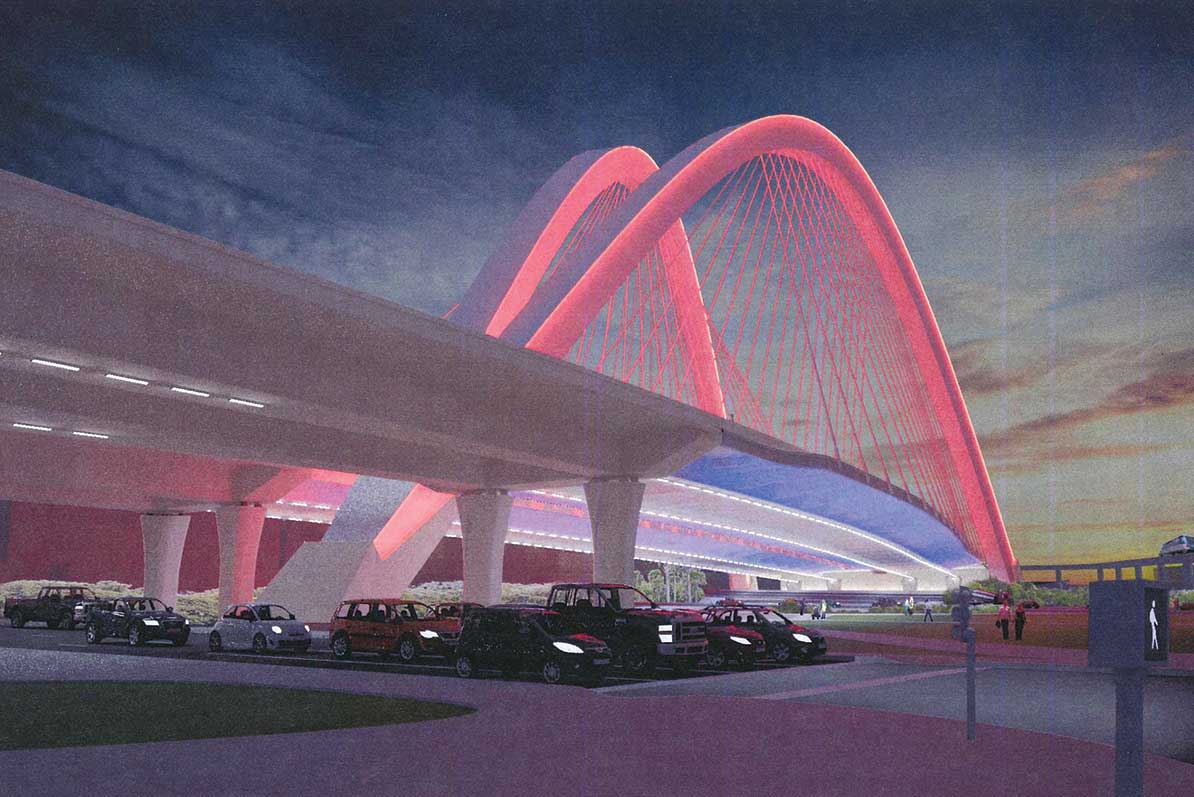 Design-build contracts for a long-awaited “signature bridge,” part of an upgrade of I-395 from west of I-95 to the MacArthur Causeway, will be advertised next year. But Metropolitan Planning Organization members are already discussing specific challenges, as well as whether the project should be sidetracked.

The reconstuction, which aims to improve traffic flow from Miami Beach to the mainland, including PortMiami, as well as to State Road 836 and I-95, was the focus of discussions Dec. 17. The signature bridge over Biscayne Boulevard has been on the wish list of downtown organizations for years to create an iconic entrance to the city’s core.

The Florida Department of Transportation (FDOT) has secured the estimated $600 million needed for reconstruction, which is slated to begin in January 2017 and last about five years, said Raul Quintela, transportation department project manager, in August.

The project will dramatically increase both vertical and horizontal clearances to create a sense of space and light, Beth F. Steimle, P.E., project manager for TYLIN, a consultant for the state transportation agency, told the planning organization.

To improve aesthetics appropriately, the agency divided the area under the bridge and roadway into three zones: Zone 1, between Northwest First through Third avenues in Overtown, is to have a more residential feel, with open, landscaped spaces. Zone 2, from the FEC railway tracks to North Miami Avenue, “will have a more industrial feeling, with parking areas,” and Zone 3, near the Adrienne Arsht Center for the Performing Arts, will “have a downtown urban downtown feel,” she said, with landscaping, open spaces with wide walkways for pedestrians and cyclists, aesthetic lighting and some parking.

Also in Overtown, the transportation department will re-open Northwest Second Avenue to north-south movement, she added.

The centerpiece of the signature bridge is to be a 550-foot suspended span with its apex 245 feet above ground. Because of the type of support pillars to be used, the design reduces the number of columns in the area from about 800 to 80, Ms. Steimle said.

“The signature bridge over Biscayne Boulevard will be impactful,” she predicted. When the current pillars are removed, “there will be a lot more light coming in. Right now, it’s dark.”

“Zone 1 and Zone 2, great,” said Maurice Ferre, former Miami mayor and planning organization member. “But when it comes to the bay, which we all love, it becomes a wall. It does not have to be a wall. I have, for the past two years, been requesting that there be an opening so that people can go from the old Miami Herald building to the museums. Not that it be open; I know that’s tremendously expensive. But I want a walkway to be built, because now, it’s a wall right to the water. At the right time, I want to protest that here.”

“I want to join the mayor in that,” said Francis Suarez, Miami commissioner and planning organization vice chair. He had earlier suggested to the organization’s Transit Solutions Committee that the project be delayed and the funds be used instead for mass transit.

“I launched an idea, but I don’t know if it’s going to go anywhere,” Mr. Suarez said. “I’d still like to explore it. But I agree that if we do this, there should be connectivity between the northern and the southern portions of the baywalk. We only get one chance at these things. It’s a small modification with high benefit – a low-cost, high-reward sort of solution.”

“These are things I’m sure the consultants and professionals are considering,” said Jean Monestime, Miami-Dade commissioner and chair of both the planning organization and of the county commission.

“Our plan is to maintain the area, both the bridge and underneath it,” said Gus Pego, secretary of the transportation department’s District 6. “The concept is one that is easier to maintain and keep at the aesthetic level we all desire in our community. We have focused so much time and attention to develop a gateway, an iconic structure.”

Underneath the spans, the design features landscaping and meeting places “for pedestrians and the people who are making downtown livable again,” Mr. Pego said. “It will be maintained to a higher level.”

“You’ve always been a great friend to this community, but I’m asking this question because I can look at where MDX maintain its corridors and where FDOT maintains its, and there’s a big difference,” Mr. Moss said. “Part of it is that you are restrained, to some degree, in what you can put into maintenance and upkeep. So it’s not a lack of desire on your part. I just want to make sure these beautiful structures are built and maintained, because now the area is unacceptable. It’s an embarrassment.”

The blocks adjacent to the bridge are the gateway to the Adrienne Arsht Center, Museum Park and the AmericanAirlines Arena, as well as to downtown, he said.

“Hopefully it will get built, Mr. vice chair,” he said to Mr. Suarez. “I want this to be a first-class, well-maintained public space. I don’t want to do the same old stuff we do around here.”

Mr. Monestime agreed to continue the discussion at an upcoming meeting of the governing board.

“The problem is, this contract is about to be let in the next couple of months,” Mr. Ferre said.

But “we have not advertised this project, it is scheduled to be advertised next year,” said Ivette Ruiz-Paz, transportation department spokesperson. Generally, it then takes several months after that to award the contract.

9 Responses to Questions fly on new I-395 bridge