Advertisement
The Newspaper for the Future of Miami
Connect with us:
Front Page » Real Estate » Brickell condo development may slow 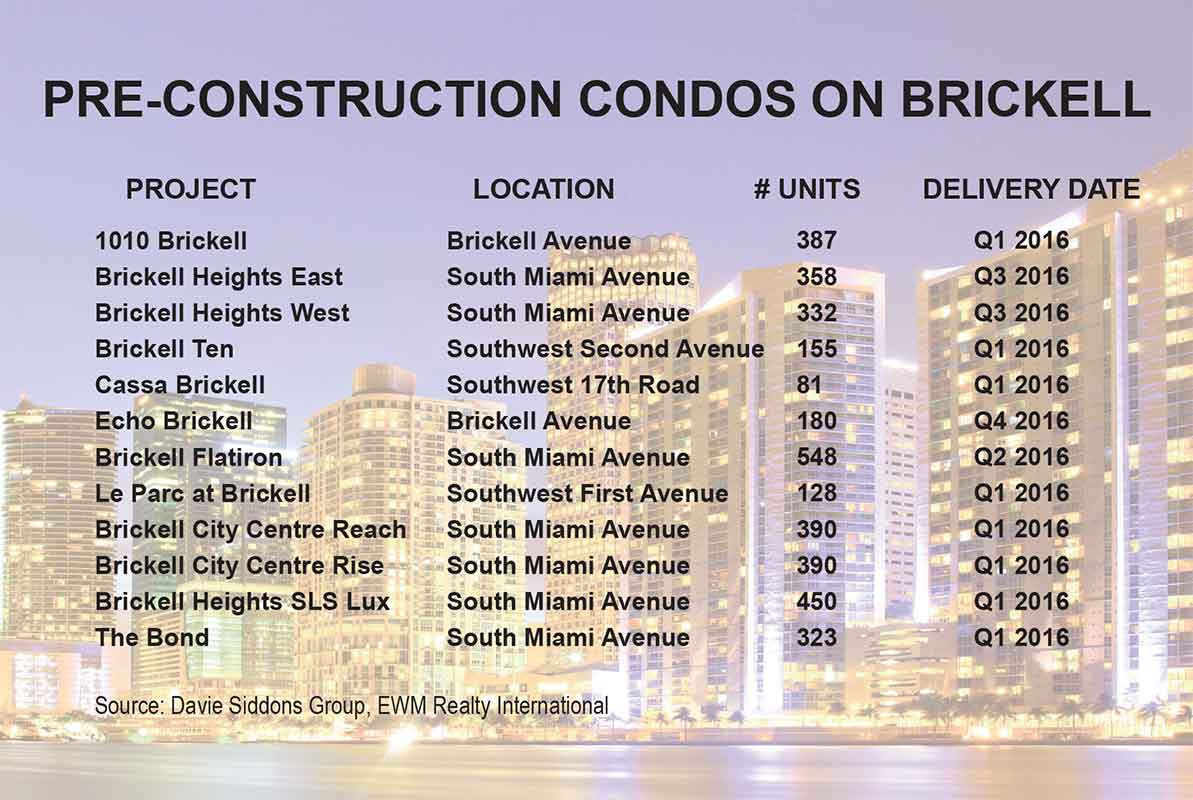 The market took delivery of well over 1,000 units in 2015, and about three times that many sit on the drawing board for the next two years, according to ISG World’s Market Report for Fall 2015, a comprehensive overview from International Sales Group, known as ISG.

While seasoned realtors say they are bullish about the potential for absorption, some predict that prices will probably go through a period of adjustment as inventory rises. But some say that prices could remain flat as the flow of inventory slows in response to changes in South America’s political landscape.

That resulted in a 14- to 22- month increase in supply, the report states. A nine-month supply is considered a balanced market. Nevertheless, research showed property prices increased in 2015 by an average of 2% to 8%. At the same time, rental prices climbed 6%.

In such an unbalanced market, EWM’s David Siddons said, continued price escalation is not in the cards.

“About 80% of Brickell condos are rentals,” he said. “In an average year there might be 1,000 rentals available. If you’re going to inject three times that into the market, the population would need to triple – and that doesn’t happen. So investors will either have to drop the rent or put the unit on the market. Corrections in sales prices will come as a direct result of the rental market investing down.”

Mr. Siddons estimates the market will absorb the inventory in about three years. The coming year, however, might look somewhat different from earlier projections.

ISG principal Craig Studnicky said that while prices aren’t likely to rise, he doesn’t see them dropping much either. ISG World reports that of the 5,513 new units available for sale since mid-2011, 4,676 have sold. That’s an average absorption of 625 units a year over the past five years.

And although more than 2,300 units in eight projects are slated for delivery in the first quarter of 2016, “don’t expect them all to come online so fast,” Mr. Studnicky said.

Several multi-project developers, he said, will be slower to come to market “for one reason and one reason only: the stronger US dollar has slowed down sales velocity from South America.”

Miami condo developers depend heavily on South American buyers, Mr. Studnicky said, and “those sales are probably 75% off of what they were a year ago. Every single developer is watching sales, because when you are in the pre-sale business you need to demonstrate rapid sales quickly to create a sales buzz.”

Though the North American market is as strong as ever, he said that without the South American buyers that buzz isn’t happening at this moment. “So most projects announced for the first quarter of 2016 will likely be pushed back to the third or fourth quarter.”

Several projects touted as planned or proposed a year ago – 1201 Brickell Bay Drive, Residences at Brickell Key, Habitat III and Brickell Flatiron II – seem to have disappeared from the dialogue, at least for now. Edge on Brickell has been cancelled, Mr. Studnicky said, though 1201 Brickell might resurface early next year.

The slowdown, he said, is not a cause for alarm. In this cycle, developers have followed the conservative South American model for pre-sales, requiring a down payment of about 50% from buyers before closing.

“Since that’s in US dollars,” Mr. Studnicky said, “it’s very hard to get them to pay that right now.”

On the other hand, existing buyers are unlikely to walk away from such a large investment. And with fewer projects to go around, he said, “construction costs are likely to come down by 10% to 15%. So it may actually benefit developers.”

Political trends in South America may help close the gap between the dollar and other currencies, Mr. Studnicky said. Venezuela just elected a centrist legislature, and the nation’s socialist president could be stymied by them. Argentina, in its first popular ballot, just elected the country’s first non-Peronist president in many years, while Brazil’s president is under attack from opposition parties seeking her impeachment.

“There’s a shift in South America away from socialism toward centrism,” Mr. Studnicky said, “and that may in the next six to nine months start to mitigate the effect of the strong dollar.”

The attraction of Miami for South Americans, he said, remains as strong as ever.

“Tracked against other asset classes, there is safety in real estate,” Mr. Siddons said. “Miami is a very safe place, not just financially but socially. People of many different backgrounds can feel at home here. So I feel very good about the future of the city.”

One Response to Brickell condo development may slow