Advertisement
The Newspaper for the Future of Miami
Connect with us:
Front Page » Top Stories » Miami nearing new ‘All Aboard’ call

Miami nearing new ‘All Aboard’ call 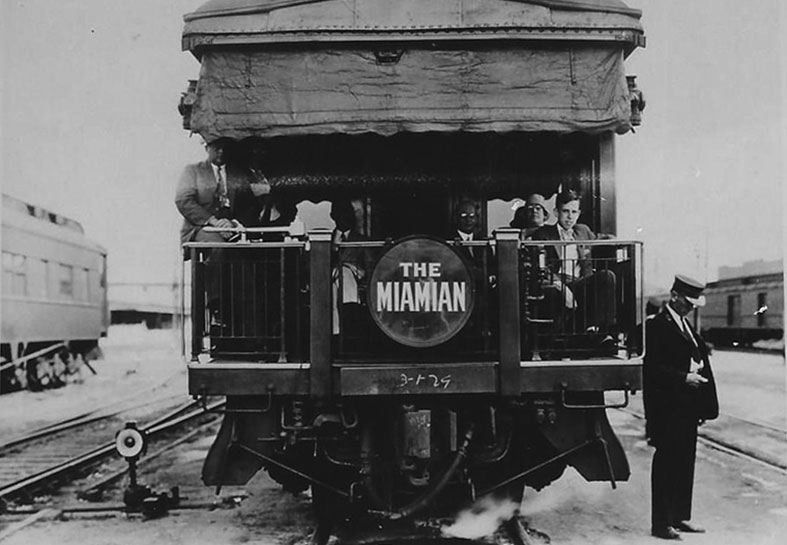 With the sound of a Metrorail train click-clacking nearby, All Aboard Florida’s president promised his company is destined to change the face of passenger rail service.

“We are reinventing what it means to travel by train,” Mike Reininger, president and chief development officer of All Aboard Florida, told a tent-full of people gathered Monday on a corner of the site that will become MiamiCentral.

It was a chance for the company to brand its new express train.

It’s called Brightline and will connect the major cities of south and central Florida along a 235-mile route beginning in 2017.

With the backdrop of a huge video screen showing images of roads choked by slow-moving cars and flashing statistics about a booming population, Mr. Reininger spoke of “a better way to move” and a smarter way to travel.

“It is a big idea, an innovative idea, a bright idea,” he said.

“With the introduction of Brightline, we set out to reinvent what traveling by train can mean in America, making it a forward-leaning solution that is a smarter alternative to more cars on crowded roads,” said Mr. Reininger.

The company showed images of the Brightline trains – being built now in California by Siemens – each to be adorned in a spectrum of distinct colors: BrightRed, BrightOrange, BrightGreen, BrightBlue and BrightPink, led by BrightYellow locomotives.

Mr. Reininger called South Florida a dynamic place with a promising future that continues to see growth in its population and the number of visitors it attracts. Brightline is a new option for moving all of those folks around.

Brightline will offer door-to-door travel experiences at a series of dedicated stations, he said.

“Brightline lives at the intersection of transportation and hospitality,” said Mr. Reininger, as images of colorful and airy train stations flashed on the screen.

In developing the brand and product offering, the company tapped award-winning architect David Rockwell and his firm Rockwell Group. The firm utilized a cross-studio approach that began with the LAB, Rockwell Group’s innovation studio, and grew to involve their architects and interior designers.

The resulting brand name, logo, train exteriors and interiors, and station interiors will create a holistic hospitality experience for the Florida travel market, the company said.

“We’re thrilled to be working with All Aboard Florida on the creation of Brightline,” said David Rockwell, founder and president of Rockwell Group. “We believe that our holistic and collaborative approach will result in an entirely new travel experience that is welcoming, comfortable, fun, and seamless from departure to arrival.”

Mr. Rockwell said in designing the exterior and interior of the distinctive new trains the company tapped into “the DNA of Florida” and the sample proved to be “sunny, optimistic and bright.”

The brand offers a platform that is welcoming, he said.

Monday’s event was staged for the media but also attracted several elected leaders from Miami-Dade County and the City of Miami.

County Mayor Carlos Gimenez was presented with the first boarding pass for the rail service, targeted for a start date of mid-2017 with travel offered from Miami to West Palm Beach. The link to Orlando is expected to be complete in late 2017.

The location of the press conference at Northwest First Avenue and Third Street was fitting for many reasons, not the least of which is that during the course of the event Metrorail cars rumbled by and Metromover cars kept their schedule to and from nearby Government Station.

When completed, MiamiCentral is to be home to Brightline, Metrorail, Metromover, county buses, city trolleys, bike rentals stations and more. The facility will also have restaurants and other retail offerings.

The new train station is rising on the footprint of the original Miami train depot for Henry Flagler’s Florida East Coast Railway that was used into the 1960s.

6 Responses to Miami nearing new ‘All Aboard’ call