Advertisement
The Newspaper for the Future of Miami
Connect with us:
Front Page » Arts & Culture » Downtown balks at Museum Park conservancy 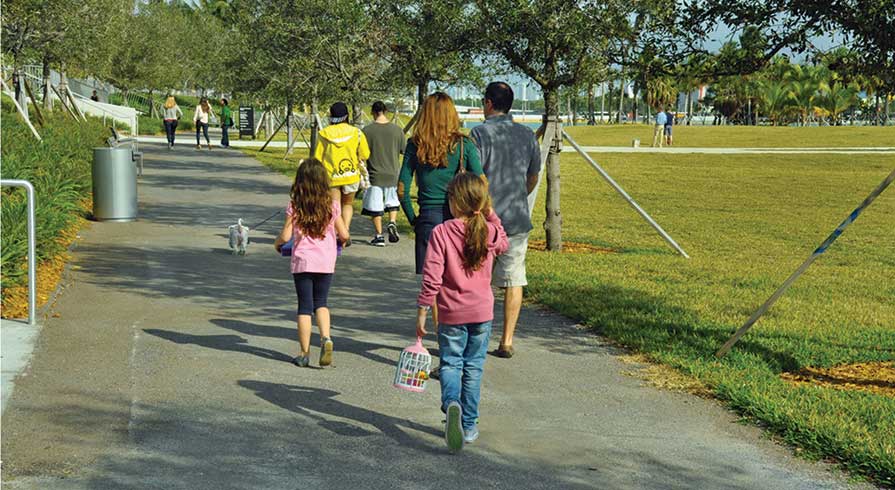 It’s hard to turn down free money for a public park, but directors of Miami’s Downtown Development Authority declined last week to back a conservancy – which has $7.5 million in pledges, though it’s not officially formed yet – for Museum Park until management details with Bayfront Park can be worked out.

Museum Park, formerly Bicentennial Park and home to the Perez Art Museum Miami and the under-construction Patricia and Phillip Frost Museum of Science, adjoins the larger Bayfront Park, which now controls both parcels.

The authority’s board readily acknowledged that the latter, managed by the Bayfront Park Trust and Executive Director Tim Schmand, has been extraordinarily successful despite budget constraints. Its $1.85 million budget was slashed to $585,000 in fiscal 2007-08, but the park was able to recruit events that have not only kept it afloat but allowed money to be allocated to operations and maintenance.

That’s the point, said a white paper by authority staff. “The City of Miami does not directly fund Museum Park or Bayfront Park,” so they are required to host “large-scale, multi-day events [that] limit general public access to the park.” The proposed conservancy has “a stated commitment to keeping the park available and open at all times.”

Mr. Schmand told authority directors that 96% of the park is open. A notable exception is the Ultra Music Festival, held in March at Bayfront – not Museum – park. “Whether you like the music or not, Ultra has done more to bring Miami’s brand around that planet than anything,” he said. The festival is attended by thousands and viewed by millions around the world.

In a letter to Alyce Robertson, authority executive director, Mr. Schmand said that Museum Park has been closed for only one day since its opening, when the E-Race electric car competition was run. Other events are restricted to portions of the 22.5-acre park, while most areas remain open.

Advocates for Museum Park presented the conservancy proposal to the authority last month, saying that Museum Park has been neglected for 30 years. The Miami and Knight foundations have laid the groundwork for the conservancy, which is to be a public-private partnership.

The plan is to transform the park into a lushly landscaped space with performance area, a playground, shade and water features, and room for waterfront dining options. If the Miami commission approves next year, the conservancy would manage Museum Park but the city would still own it. Friends of Museum Park, an ancillary group, would raise funds to support and maintain it.

The Bayfront Park Trust “would have preferred to be notified” that the downtown authority was considering backing the conservancy, Mr. Schmand’s letter continued, and would have liked “some advance notice and an ability to address these issues before the DDA and other interested stakeholders.”

“This is not us versus them,” said Javier Alberto Soto, president and CEO of The Miami Foundation. “We have the utmost respect and regard for Tim and his team. Somehow, this conversation got off the rails. We’d like to hit the reset button. We want to leverage the skills the trust has, but we can deliver resources.”

For the first 18 months, the conservancy would concentrate on raising funds, while management of both facilities would remain with Bayfront Park. Then there would be a transition “after which we would partner with the trust. We’re hopeful that we can negotiate an agreement that spells it out clearly,” Mr. Soto said.

“There are two conversations going on here,” said Downtown Development Authority board member Nitin Motwani, who is managing principal of Miami World Center and managing director of the Encore Housing Opportunities Fund. “One is to create capital and get community input. The other is about operations.”

“There’s a missing piece,” said authority vice chairman Neisen Kasdin, who is office-managing shareholder of the Akerman law firm. “Clearly there are some bruised feelings.” While he praised the conservancy model, which has been successful for New York City’s Central Park and Chicago’s Millennium Park, he said there is also value in “the quality of management Tim brings.” He suggested management of both parks remain with Bayfront for five years.

“There needs to be a sit-down,” Mr. Kasdin said. “There has to be a real discussion about management. We need to calm the waters.”

“Any new park that’s been built has had the conservancy model,” said Marc Sarnoff, board chair and Miami commissioner. “There are many things government is not dealing with. The city is not funding parks. How can we turn our backs on this money?”

“Pledges – not money,” said board member Jose Goyanes, who is the owner of Metro Beauty Center and Churchill’s Barbershop. “Remember Perez Art Museum Miami? A lot of people backed out of their pledges. Tim’s done an amazing job. If something’s not broken, why fix it? It doesn’t make sense to me.”

Board member Bruno Barreiro, who is a Miami-Dade County commissioner, asked why the conservancy model is so successful at fundraising.

“Comfort and security to investors,” replied Jay Solowsky, authority outside counsel. “Philanthropy is not going to come to the city.”

In the end, the board agreed with Mr. Kasdin’s suggestion that the authority, Miami Foundation and Bayfront Park Trust engage within 30 days in a “vigorous, full and open discussion,” of their roles if a conservancy is formed. Directors said they hope the matter will come back before the development authority board within 60 days.