Advertisement
The Newspaper for the Future of Miami
Connect with us:
Front Page » Transportation » $600 million I-395 bridge to go to bidding 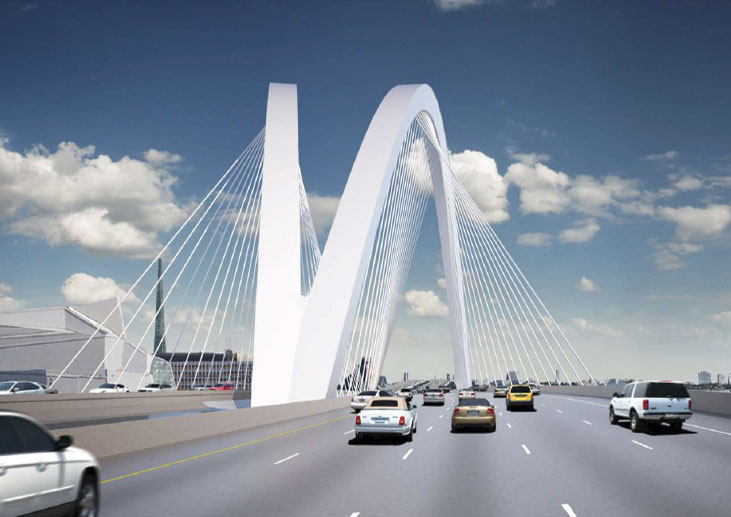 A state project designed to bring major improvements to I-395, including a new “signature” bridge, will be advertised for bids yet this year.

That’s the latest word from the Florida Department of Transportation, which says the project is on schedule, with construction expected to begin in 2017.

The $600 million project will rebuild 1.4 miles of I-395 from the I-95/Midtown interchange to the west channel bridge of the MacArthur Causeway in Miami.

In preparation for rebuilding the roadway, the state recently agreed to a land swap with Resorts World Miami.

The agreement called for the state transportation department to sign over about 607 square feet of land to Resorts World in exchange for approximately 4,482 square feet from the company.

“The land granted to FDOT is for the purpose of building the I-395 reconstruction project,” department spokesperson Tasha Cunningham told Miami Today.

The property is part of the large waterfront parcel that once was home to the Miami Herald.

Malaysia-based Genting Group purchased the 14-acre newspaper site in 2011 for $236 million. It purchased surrounding properties and announced plans for a $3 billion luxury casino with multiple towers, stores and an elevated beach and lagoon. Without winning a state OK for casino gambling, the plan has been scaled back to two residential towers, a hotel and retail.

The freeway to be rebuilt is part of State Road 836 (SR 836), locally known as the Dolphin Expressway. The portion between I-95 and the causeway is designated as I-395, and takes traffic to and from Watson Island and Miami Beach.

The state expects to have the project ready for bidders before year’s end, according to Ms. Cunningham.

“The project is currently pending legislative and governor’s approval,” she said.

The look of the so-called signature bridge is still undecided, even though the transportation department and review committee narrowed down proposed designs last year.

Last October, the state reported that design options for the bridge had been whittled down to two: Wishbone or Lotus. By January the department was saying a third option could come into play.

The state says companies competing for the contract can present their own unique design for the bridge.

It is hoped the new bridge won’t overshadow the county’s two-building Adrienne Arsht Center for the Performing Arts and divide downtown from Omni, Edgewater and beyond.

The redesign of I-395 and the bridge have been planned since 1992, but the project was halted in 1994 by the Clinton Administration. Ten years later it seemed back on track, only to fade away again.

In April 2013, Miami Mayor Tomás Regalado and Commissioner Marc Sarnoff filed a lawsuit against the transportation department, accusing the state of not following through on a promise to build “a transformative signature bridge” as part of I-395 improvements.

In September 2013 the mayor and Mr. Sarnoff said they’d agreed to set aside the suit and negotiate a settlement, and about two months later Gov. Rick Scott announced an agreement with the city in which the state would put up $600 million to rebuild I-395, including a signature bridge.

A fact sheet on the project shows proposed improvements include:

•Building new elevated ramps (one eastbound and one westbound) that will directly link I-95 and I-395.

•Improving roadway design, updating both the alignment and the roadway surface.

•Building taller structures that will improve the visual quality of the bridge.

Safety and increased capacity are part of the need for the project, state and local officials agree.

The transportation department said project’s objectives include increased capacity to prevent traffic congestion and to improve safety by alleviating deficiencies.

Design goals include opening and brightening the environments along city streets that run under the expressway like Biscayne Boulevard, Northwest 13th Street, 14th Street, Northeast First Avenue, North Miami Avenue and others.