Advertisement
The Newspaper for the Future of Miami
Connect with us:
Front Page » Real Estate » 4 riverfront towers of 58 to 60 stories likely

4 riverfront towers of 58 to 60 stories likely 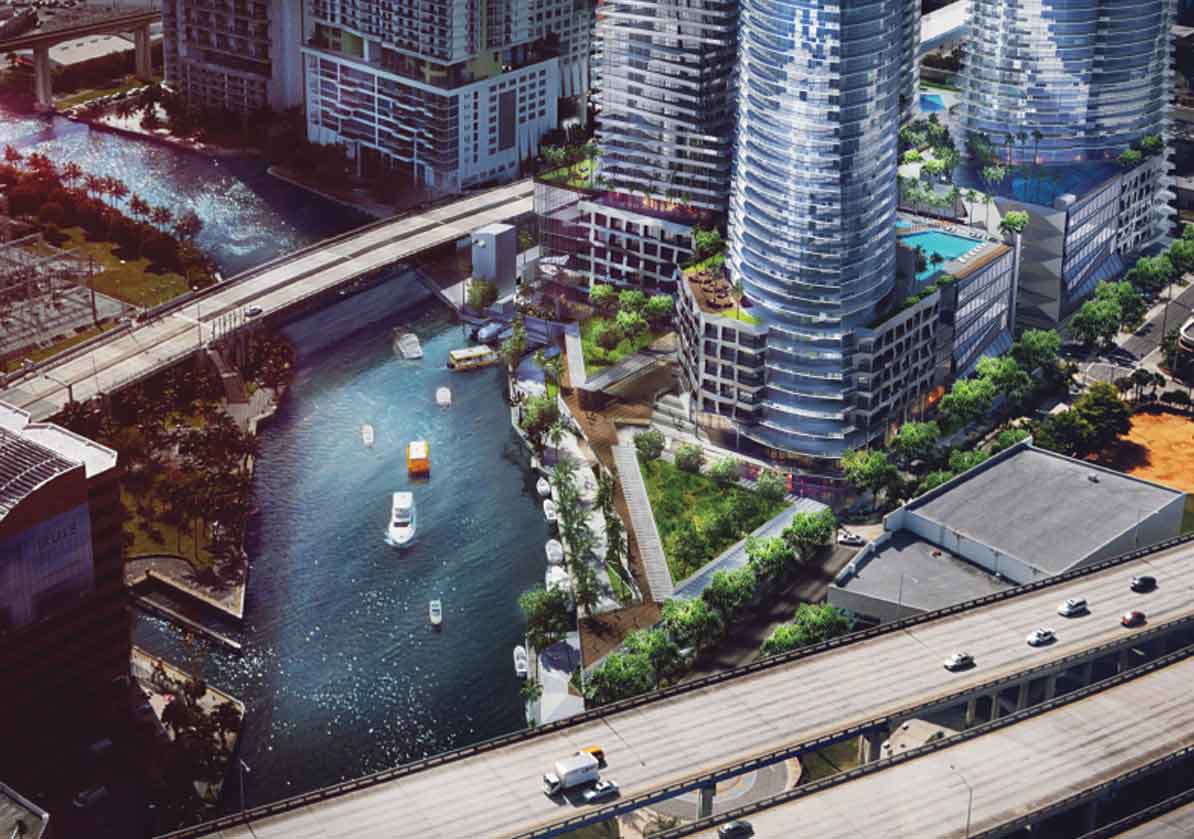 Another billion-dollar development is poised to change Miami in a big way and has garnered preliminary approval from city commissioners.

Called simply Miami River, the mixed-use project would bring hotel rooms, apartments, retail stores, restaurants and offices to the southern bank of the river that meanders through the heart of the city.

The developers promise a big and beautiful public riverwalk and an improved city park, and say the project will connect booming Brickell with historic Little Havana.

•Allow the area to be master planned for greater integration of public improvements and infrastructure and greater flexibility as part of the Miami River Special Area Plan (SAP).

•Authorize the city manager to enter into a development agreement for the Miami River SAP.

The planning and zoning department recommended approval of all items, allowing Miami River to move forward.

The project promises to bring new life to mostly vacant land just east of I-95. The development is planned for an area bordered on the north by the river, on the south by Southwest Seventh Street, on the west by Southwest Third Avenue, and on the east by Southwest Second Avenue.

Along with its size – four towers 58 to 60 stories tall on 6.2 acres – this project stands out because the City of Miami is a partner.

As part of the proposed Special Area Plan under the Miami 21 zoning code, Jose Marti Park would become a part of Miami River.

That would result in an extension of the riverwalk west and under I-95, and improvements to the city park. A deal struck with CG Miami River LLC also ensures the public riverwalk will be extended east under the Second Avenue Bridge and past neighboring condo tower Latitude on the River.

The city’s Urban Development Review Board and the Miami River Commission recommend approval of the large mixed-use project, with conditions.

Melissa Tapanes, an attorney representing the developer, told commissioners the project will transform the site into a “dynamic mixed-use destination” connecting Brickell with Little Havana.

She said the developer has undertaken comprehensive community outreach and attended many meetings since May 2014.

The goal is to create a sustainable neighborhood that offers a transition from the lower density of Little Havana to the higher density of downtown, said Ms. Tapanes.

The overall project is to see creation of a new public street accented by public art, and more than $21 million in public benefit improvements within the river district.

“It is perhaps the most exciting residential development on the river in the last 10 years,” he said.

He also said it is exciting to have money available for a renaissance of Jose Marti Park.

•Make certain that the more than $21 million in public benefit improves the river district.

•Have the developer agree to build and improve the public riverwalk east under the Second Avenue Bridge if Latitude on the River doesn’t do so.

•Have the developer, as part of phase one, commit $5.5 million to be held in trust to ensure construction of the riverwalk if phase two isn’t built.

Several residents and business owners spoke in favor of the project, using words like “magnificent.”

Barbara Rodriguez said she lives about four blocks from the site and had attended a few of the outreach meetings. Having the project funnel money into the city park is extremely exciting, she said.

There are very few parks in the area, so she said she is pleased to see an emphasis on Jose Marti Park improvements and extending the riverwalk.

“This will revitalize the area,” said Ms. Rodriguez. As for Brickell and Little Havana, “this will bring our community together,” she said.

Area developer Avra Jain spoke in favor of the project, which she called beautiful.

She commended the architects on the design, and said it was good to see the public benefits money spent in the impacted area, including its use for added security at the city park.

“It’s one reason I bought in the neighborhood,” said Ms. Jain.

Meg Daly, founder of a group advancing The Underline, a planned linear park and trail, praised the Miami River project.

“This project embraces people first. It is a livable, sustainable development,” she said.

One man voiced concern about the project’s impact on affordability of housing and suggested the profits to the city from new towers go to affordable or workforce housing.

One commissioner was a bit cool on the large density planned.

“It looks beautiful, but I’m concerned with the density,” said Frank Carollo. He noted that the developer only owns 6.2 acres and needs the city’s participation to allow the Special Area Plan.

The purpose of a Special Area Plan is to allow parcels greater than 9 abutting acres to be master planned for greater integration of public and private improvements and infrastructure.

In order to make the 9-acre minimum, the developer and city plan a public-private partnership that includes part of the adjacent park.

Current zoning of the site limits density to 200 residential units per acre.

Mr. Carollo said he does like the additional riverwalk that the project affords and the planned improvements to the park.

Commissioners Francis Suarez and Marc Sarnoff thanked the developer for investing in the city.

A final vote may come in late October.