Advertisement
The Newspaper for the Future of Miami
Connect with us:
Front Page » Government » Action put off on Gables US 1 project

Action put off on Gables US 1 project 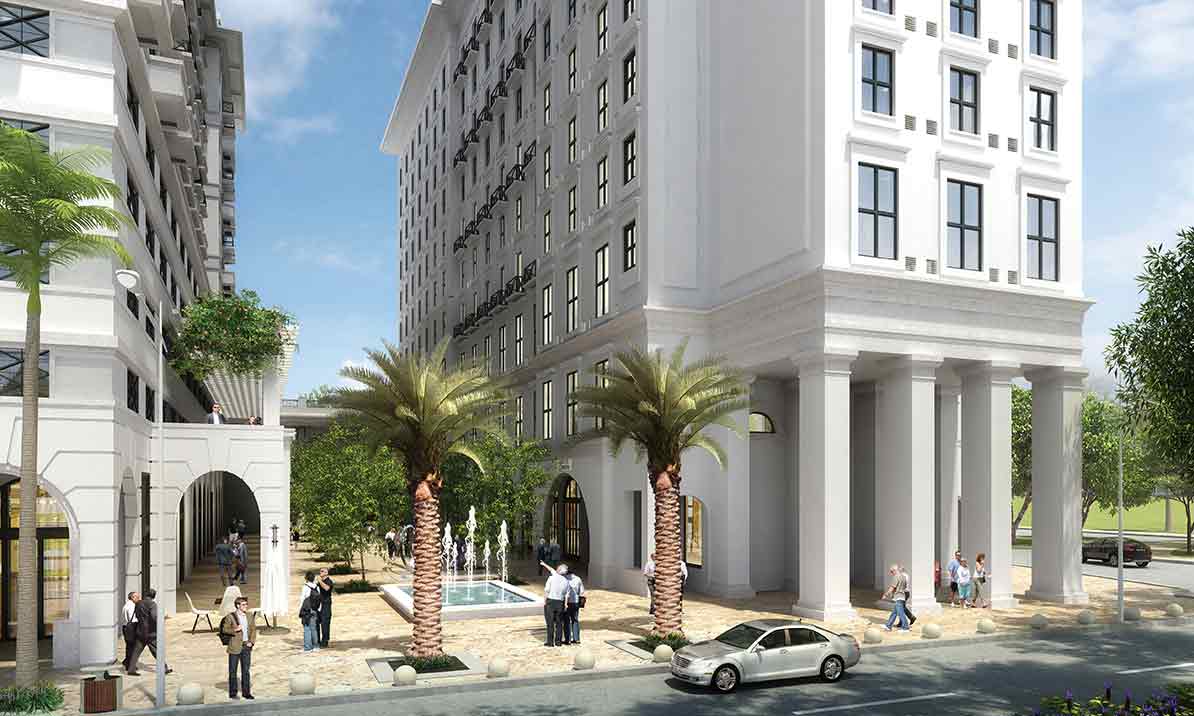 About 250 neighbors and others turned out for the Aug. 12 meeting, but by the time the developer, an attorney for the neighbors, and city staff had made their cases, there was no time left for public comment. The board is to take the issue up again Sept. 16, and if it approves, the plans must go before the city commission.

They would replace the current Holiday Inn, a three-story, 155-room hotel with 109 off-street parking spaces in a surface parking lot, city documents note.

The developer, NP-International, had requested a zoning change from commercial low-rise intensity to commercial high-rise intensity, which would permit it to build a structure as tall as 190 feet. City staff recommended approval, as long as the developer voluntarily agreed to limit the building height to 142.6 feet.

The developer also sought designations as a planned area development and mixed-use site, which would allow the relaxing of certain standards in return for benefits for the public.

The recommendation from staff was for approval on all requests, but with conditions. Any building within 100 feet of a residential property will be limited to a height of 45 feet, and if no building permit is obtained within 18 months, the zoning would revert to commercial low-rise.

Many of the other conditions are standard to a large development: any potential traffic issues be resolved, the developer cannot lease out any of the parking to an outside entity, plans must be approved in advance, and parameters that normally apply to any construction within the city must be followed.

Jeffrey Bass, who represents NP-International with co-counsel Laura Russo, said Paseo de la Riviera is an “exemplary” example of transit-oriented development, lying across US 1 from the University Metrorail Station. A planned pedestrian overpass spanning US 1 will connect the project to the transit system and university. The surrounding neighborhood is largely strip shopping centers and multi-family residential, Mr. Bass said.

“This project is about connectivity, it’s about creating community, and ensuring development that promotes walking, biking and opportunities for social exchange in a public space,” said Jorge Hernandez, its architect.

The paseo, which he called “an urban living room,” will be landscaped and equipped with street furniture, fountains and public art, he added. More than 40% of the ground floor is public space, with arcades that are 20 feet tall and a portico facing the highway, he said.

The site is the deepest lot in the area at 325 feet, Mr. Hernandez said, “allowing us to do something very unique here. Rather than have the buildings broad-shouldered to the corridor, we can turn them 90 degrees and have the thin dimensions face the avenue.” It would allow direct access to Jaycee Park, behind the site, from US 1, he added.

Because US 1 is 150 feet wide, the height of the buildings is in scale, Mr. Hernandez said. The complex’s shorter buildings face the residential section, he said.

The developers held more than 45 meetings, he said. “As a result, the project evolved. We removed an entire floor of the apartment building, provided public bike storage for Metrorail users, and added a roundabout,” among other improvements, he said. “I believe we brought you the very best use that we could for this parcel of land,” he said.

Traffic can only enter or leave Paseo de la Riviera from US 1 and will not funnel through the residential neighborhood, said Tim Plummer, a traffic consultant with David Plummer & Associates. “The plan minimizes impact on the surrounding area, in my opinion.”

“We’ve had a lot of public input,” said Ramon Trias, planning and zoning director. While the developer is technically correct that the properties immediately surrounding the project are multi-family, “there is a single-family neighborhood very close by, and it is a very different scale,” he said.

The height of the two buildings is probably the most significant sticking point, he said. “The massing of the building attempts to meet the code requirement,” he said, “and it’s close.”

“The project has been reviewed multiple times by every department that has a say in development and I believe the project has become better,” Mr. Trias said. “I would say the current code is very complex. The tools we have are not quite right for transit-oriented development.”

A city document notes that what happens with Paseo de la Riviera might be precedent-setting, because other Metrorail stations that are in or near Coral Gables will probably be targeted for these sorts of developments.

“My clients object to this application as an unwarranted increase in commercial intensity bulk and height, abutting a low-intensity residential neighborhood,” said Tucker Gibbs, attorney for the Riviera Neighborhood Association. “This project is complex and multi-faceted. It seeks to do several things: it more than doubles the allowable square footage and triples the allowable height, all without a city-approved plan regarding future development of the area.”

The city has been studying a plan for the entire US 1 corridor within its city, and a report was scheduled to be presented Wednesday, Mr. Trias said.

“But the word has gone forth: built this project now and plan later,” Mr. Gibbs said. He also said the project is more compatible with Gables One, a tower that is 142 feet tall, than with the surrounding neighborhood.

“Don’t be fooled and don’t kid yourselves: these neighbors have been saddled by the Gables One mistake since 1971. Everyone knows that was a bad project,” he said. “Is that a valid benchmark? Gables One is the tallest on US 1 in Coral Gables.

“US 1 needs a clear set of planning documents and guidelines, and you do not have it in front of you,” Mr. Gibbs told the board. “At its core, this proposal is about cramming as much development as the city will allow on those 2.7 acres. Protection of this neighborhood is taking a backseat to the project’s relationship with US 1, the University of Miami and the Metrorail station.”

One Response to Action put off on Gables US 1 project