Advertisement
The Newspaper for the Future of Miami
Connect with us:
Front Page » Education » UM reverses campus traffic growth 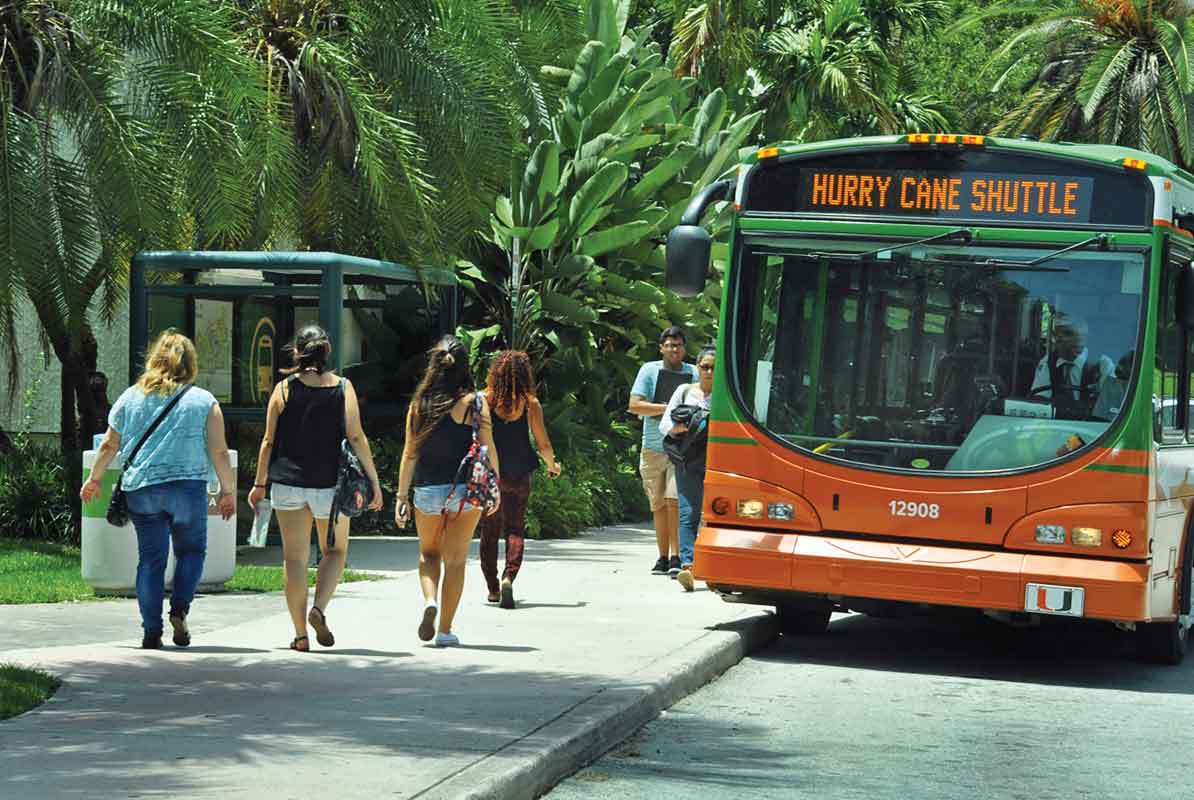 As the University of Miami has grown over the past two decades, it has shrunk its neighborhood traffic impact, a university study says.

Janet Gavarrete, associate vice president of campus planning and development, said those living in the residential neighborhood north of Lake Osceola have often blamed the university for creating traffic on their streets. The university is an easy scapegoat, she said, because residents regularly see construction projects rising on campus.

But according to university figures, although campus development has increased by 1.5 million square feet and full-time enrollment is up 39% since 1992, university traffic north of the lake has decreased by 37.5%.

This statistic was calculated by measuring the number of cars that came into the university via entrances north of Lake Osceola. Ms. Gavarrete said that allows her to be certain that, although overall traffic in the neighborhood might not have fallen so significantly, university-related traffic has dropped.

Most of the decrease has come since 2011, when the university created its first Mobility Plan to address the root causes of campus traffic north of the lake.

One of the plan’s first goals was to shift parking to the south of campus, away from the residential neighborhood to the north, and make finding a spot more efficient.

“Parking drives traffic,” Ms. Gavarrete said. “There’s plenty of parking. It’s just not where everybody wants it to be 50 steps from the core of campus.”

The university began assigning students and faculty parking passes for specific lots to stop drivers from needlessly circling campus on residential streets searching for a parking spot. Instead, they are guaranteed a space in their assigned lot.

The university also built an internal road connecting its northern parking lots to take UM drivers off external streets. In the process, it eliminated 400 parking spaces north of the lake and replaced them by expanding the Pavia parking garage, which is south of the lake. The university will add 800 more southern parking spaces when it finishes construction on the Merrick Garage in 2016.

Shifting parking to the south is intended to alleviate traffic in the suburban streets of Coral Gables and herd cars onto Ponce de Leon Boulevard, which Ms. Gavarrete said can handle the burden in the short term.

But, she said, her plan is to eliminate traffic, not just redistribute it. One way to do that is to keep students on campus.

To that end, the university built the Donna E. Shalala Student Center in 2013, which now houses more than 200 students groups, the Rathskellar student bar and new food options.

“When you walk around campus and you see the activity on the new patio, that place rocks,” Ms. Gavarrete said. “We firmly believe it is part of enriching our academic experience and it keeps people here.”

The university also upgraded both its dining facilities and dining options, expanded its late-night event schedule, and created programs designed to keep commuter students on campus throughout the day.

Meanwhile, the university has added 800 on-campus beds since 2004 and plans to add 1,100 more in coming years to eliminate the need to commute to class.

Ms. Gavarrete said adding on-campus housing in the next two or three years will “balance our checkbook” and neutralize the university’s impact on traffic south of campus.

But when students and faculty do need to leave campus, the university hopes to encourage them not to use their cars.

Since the early ’90s, the university has offered a free shuttle service to circulate people around campus and take them to off-campus points of interest like Coconut Grove or Sunset Place. But in 2008, it launched a slew of programs designed to reduce use of personal cars.

That year, the university began subsidizing Tri-Rail fares and Miami-Dade Metropasses for roughly 2,700 employees, faculty and students through its public transit program. In exchange, participants are not allowed to buy parking permits.

The university also launched UBike, a bicycle program that provides bike racks and air stations across campus, coordinates the construction and maintenance of bike paths, and even allows bicycle commuters to shower and change at the Wellness Center.

Ms. Gavarrete said her office also tries to encourage biking and walking by shading paths with trees or overhangs to offer some protection from the sun.

“A lot of what we think about are the in-between spaces,” she said. “Not everything has to be shaded, but if a lot of it is, it becomes more inviting.”

The last traffic-cutting measure of 2008 was banning all freshmen living on campus from bringing their cars to school.

“There are so many options now that for college students it may not be so important to have that one car that singly belongs to them,” Ms. Gavarrete said.

She said she envisions a day when students can sign up for a university car sharing program in the same way they choose a meal plan or pay for on-campus housing.

Ms. Gavarrete said Miamians, still attached to their cars, have been slow to embrace what she sees as a transportation revolution. But she hopes the University of Miami can take a leading role in changing that.

“We’re unique in that we’re a campus and we can control the policy, programs and services that can reduce traffic,” she said. “But we haven’t invented anything. We just made it more convenient and marketed it to our own people.”

Ms. Gavarrete said a lot of her mobility planning hinges on getting commuters to break old habits.

“A lot of things don’t happen because they require a little more effort, or they’re a little less convenient,” she said. “But if you push on both ends, you can modify people’s behavior.”