Advertisement
The Newspaper for the Future of Miami
Connect with us:
Front Page » Real Estate » 700 Midtown rentals get cold shoulder 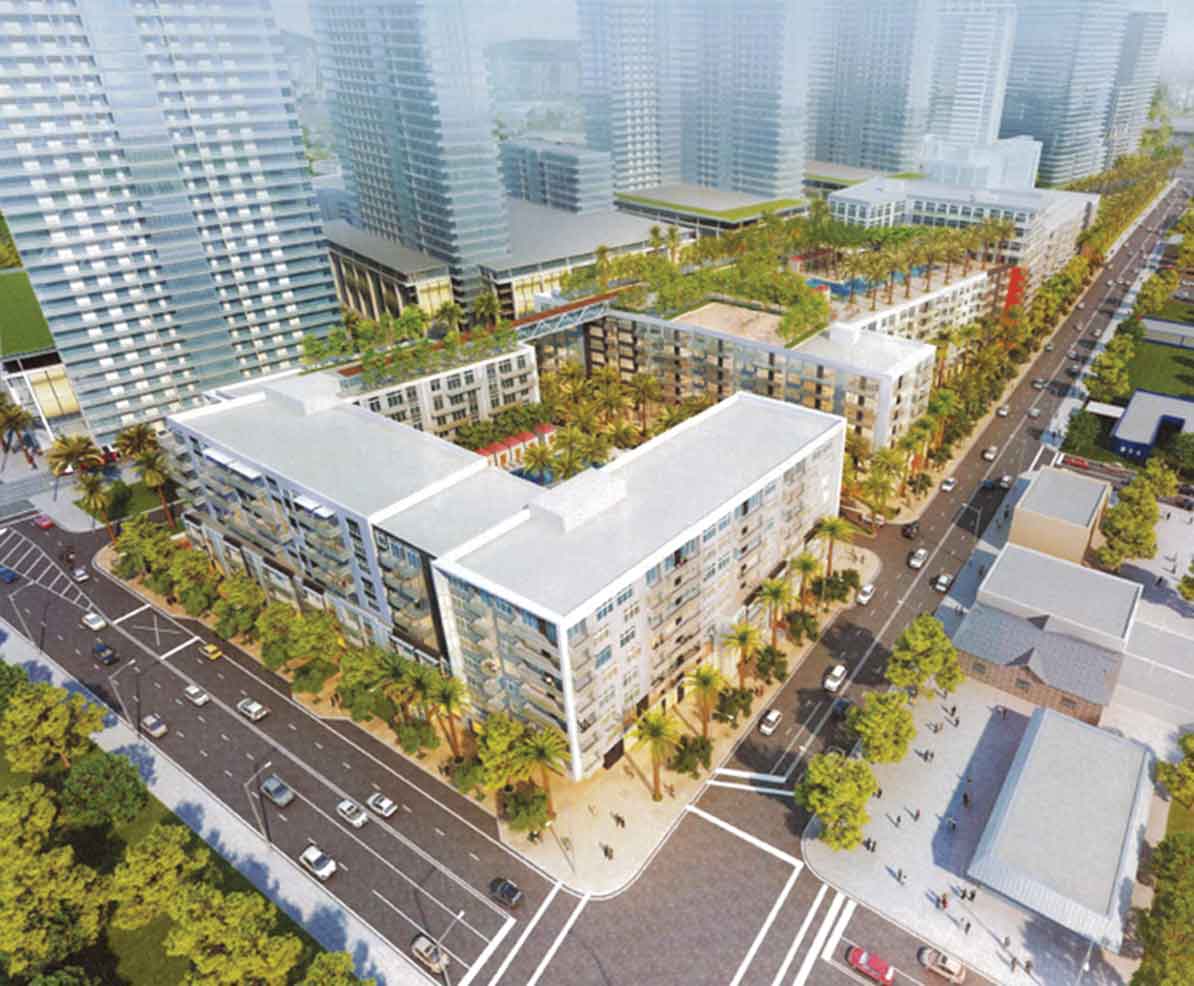 A developer’s plan to turn half a dozen acres next to Midtown into row upon row of rental apartments is in limbo after a less-than-favorable examination by the city’s Urban Development Review Board.

The angular site on Northeast Second Avenue hugs the FEC railroad tracks and is the former home of a Chiquita Banana distribution center.

The overall proposal is a multi-family housing development offering 700 rental apartments in several buildings, eight stories and one section at 12 stories.

The so-called Chiquita development stirred negative reaction from several review board members July 15 mainly due to its enormous size – the layout or massing of the low-level buildings.

Board member Willy Bermello also said the drawings were lacking in needed detail.

The bulk of the project was deferred until the board’s next meeting in September.

David Snow, an assistant city planner, told the board that staff has worked diligently with the applicant for more than six months “to get to where we’re at today.”

Some of the issues they worked to resolve included mitigating a large block look to the development, improving the façade on Chiquita North, adding larger setbacks to Northeast Second Avenue on the northern parcel, and attempting to make the “massing” at more of a “human scale,” said Mr. Snow.

The design package presented to the review board was prepared by Zyscovich Architects of Miami.

Attorney Javier F. Aviñó, speaking on behalf of the developers, said the project is “well under the allotted density” and the proposed heights are below what could be built.

The property is bordered on the south by Northeast 29th Street.

“The property abuts the FEC rail corridor and is a challenging site to work with,” said Mr. Aviñó. “We think it’s thoughtfully scaled,” he said of the project.

Architect Bernard Zyscovich said AMLI is a company known for constructing “beautiful” apartment communities across the country with lots of amenities and landscaping.

Most developers want to maximize their development rights, building as high and as large as they can, said Mr. Zyscovich. That is not the case for this project, he told the board. An agreement between the seller and buyer limits the height of the apartment buildings, he said.

This put some constraints on the design team, Mr. Zyscovich acknowledged. Another challenge is that the land is “disconnected” from Midtown by the railroad tracks, he said.

At this time, the best cross connection for pedestrians would be at 29th Street, he said.

In designing the project, the thought was “how to be a good neighbor to Midtown without being connected to it,” Mr. Zyscovich said.

He said the planning staff was helpful and had great ideas.

The site plan includes areas with 15-foot-wide sidewalks. The north block has 29% open space with a courtyard and several gardens, and the buildings will contain “highly-amenitized, quality rental apartments,” he said.

There are two large swimming pools in the plan, ground floor lobbies with bicycle parking adjacent to the lobbies, and more than adequate vehicle parking, he said.

Mr. Zyscovich said the façades would be built using a variety of materials including glass, metal, fiberglass, wood, corrugated metal and so on. The idea is to break up the long horizontal property “with something interesting to look at.”

Not all review board members were critical of the plan. Several commended the designers for what they achieved while faced with unusual constraints.

Those board members who were concerned with the massing of the large project suggested breaking the buildings into smaller pieces and varying the heights of the buildings. Others suggested mixed uses including retail.

Mr. Zyscovich said the applicants have a certain business model that doesn’t include managing retail space, and there is no desire to build the project and have a row of empty retail units.

Mr. Bermello, while saying he has high regard for Mr. Zyscovich, wondered if there was a rush to approve the plans and why.

He complained of not seeing enough detail in the plans and said he would not vote to approve the project as presented.

“The architectural definition is simply not there… This is like a pre-, pre-concept with some renderings,” he said.

Mr. Bermello referred to the project as “a massive block,” “a humungous, massive building,” and added, “I can’t see how we allow this in our community.”

He said he’d like to see the project return to the board “cut into two or three pieces.”

Mr. Aviñó told the board that the project was not “rushed into,” noting that the designers have been working on various versions of the plan with the city’s planning staff for seven to eight months.

Board member Jesus A. Permuy said he was also concerned with the scaling or massing of the project. He said he felt uncomfortable approving “something of this scale.”

Board Chairman Robert Behar commended the architects for doing the best they could under the impositions they faced, equating it to sending a boxer into the ring with both arms tied behind his back.