Advertisement
The Newspaper for the Future of Miami
Connect with us:
Front Page » Top Stories » Miami Dade College in building mode 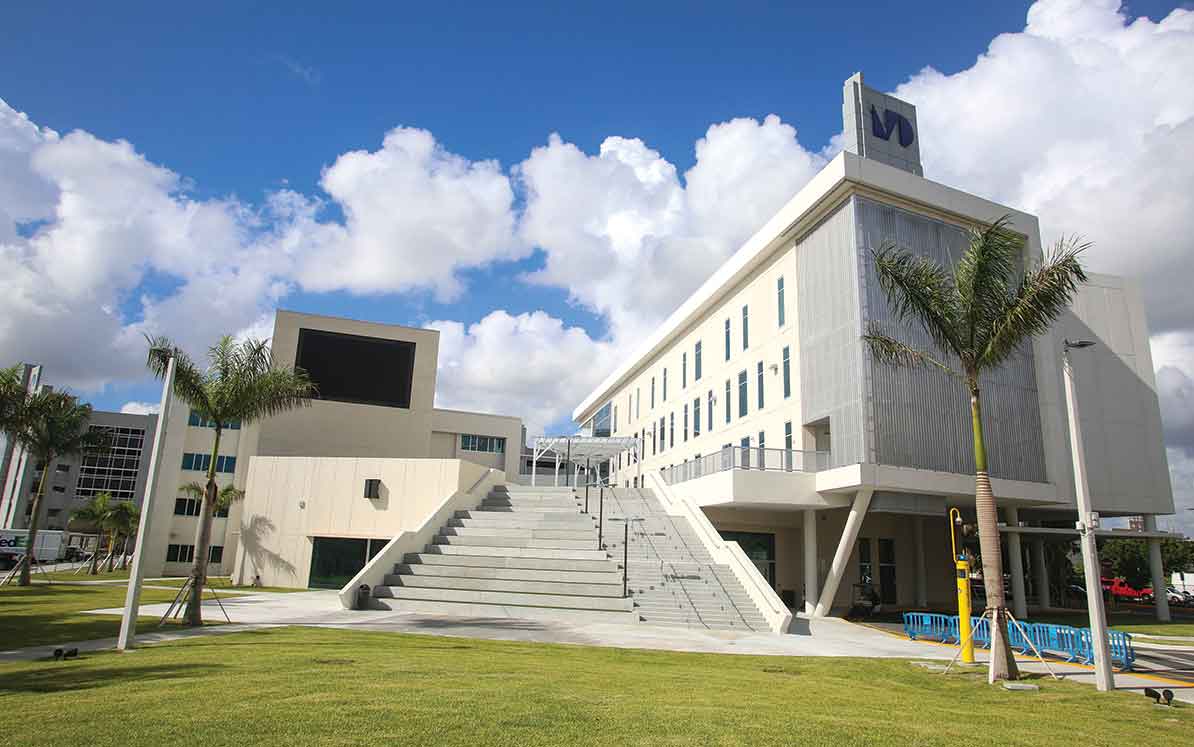 To expand the breadth and depth of its course offerings and create space for greater enrollment, Miami Dade College is building new academic facilities and parking garages on some of its campuses.

In spring, construction wrapped up on major renovations to the Hialeah campus. Students and faculty have now moved into a new four-story multi-use academic building that houses classrooms, faculty offices, meeting spaces, a library, an art gallery, a student service hub and the campus’s first chemistry and biology laboratories.

“The new building expands our offerings on the Hialeah campus from A to Z,” said Rolando Montoya, the college’s provost for operations. “Now we will be able to offer a more comprehensive menu of programs.”

Before the renovations, Mr. Montoya said, the classes students could take in Hialeah were limited to English as a second language and some of the more basic courses. Now, he said, students will be able to complete certain degrees entirely on the Hialeah campus.

To accompany the new building, the college also put up a new 1,000-space garage.

“You can’t add a building that increases capacity and enrollment without adding parking,” Mr. Montoya said. “Students will look for a campus where they can park.”

Meanwhile, enrollment has been stagnating at Miami Dade’s West campus in Doral because of insufficient parking, Mr. Montoya said. In October 2012, a five-story garage the school was building to accommodate growing enrollment collapsed, killing four workers. Construction stalled for almost three years while the college sought legal damages from insurance companies, contractors and subcontractors. In April, the college received $33.5 million in a settlement.

That money has already been used to demolish the ruins of the old structure, and work has begun on a new 2,000-space garage. Mr. Montoya said it will be finished in October 2016.

Meanwhile, Miami Dade is spending $156,000 a year to lease 450 spaces at a nearby Ikea garage for its students and faculty to use instead. Every 15 minutes, a shuttle transports commuters between the garage and campus.

Mr. Montoya said the inconvenience has stunted growth at a campus that should be flourishing. Recent data from the US Census Bureau rank Doral as the third-fastest-growing city in America. Mr. Montoya said that a rapidly expanding population and an influx of new businesses create tremendous potential for growth at West Campus.

“When the garage is ready in 2016, everybody will be able to park on campus,” Mr. Montoya said.

Also scheduled to open in 2016 is a remodeled 13-story office-building-turned-educational-facility at Miami Dade’s InterAmerican Campus. The school bought the InterAmerican Plaza adjacent to its campus in Little Havana for $25 million in June 2012. Now it is spending $47 million to convert an existing office building into a comprehensive academic facility by November of next year.

Like the new building on the Hialeah Campus, the new InterAmerican building will house classrooms, faculty offices, labs and student services. Mr. Montoya said the public spaces included in both buildings’ designs add another layer of depth to students’ learning and experience.

“Among the spaces that we have at academic facilities you will find auditoriums, meeting rooms, plazas, atriums and spaces for exhibits,” Mr. Montoya said. “These spaces complement what you do in labs and in the classroom.”

He said one of the college’s strengths is its co-curricular programming, because hosting exhibits, guest speakers and community events allows students and faculty to engage with their community.

“Without the appropriate physical space, it’s very hard to promote those events,” Mr. Montoya said. “You don’t want students to park, go to class and leave. You want them to have a space to meet, hang out and work collaboratively.”

The college also plans to add a four-story building and accompanying garage to its Medical Campus in the Health District. The Center for Learning, Innovation and Simulation is to be an academic building with space to simulate a real-world hospital enviroment. Mr. Montoya said it will mainly be used for the medical school’s nursing and physician assistant programs.

The deadline for architects and construction managers to submit project proposals was July 21. As of this writing, a college selection committee is still reviewing the bids.

The college is also building a 600-space garage for its Wolfson Campus on a vacant lot donated by the US Department of Justice. The $18 million project is set to be completed in August 2016.

One Response to Miami Dade College in building mode