Advertisement
The Newspaper for the Future of Miami
Connect with us:
Front Page » Top Stories » Dinosaurs lift zoo to visitor record 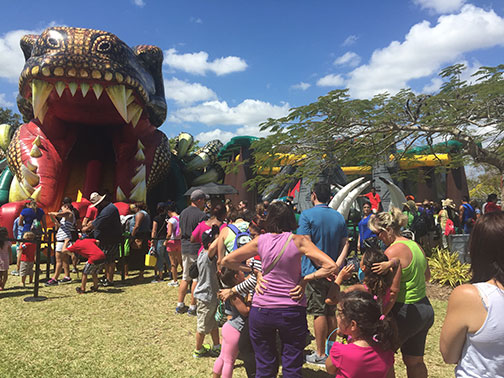 Although Zoo Miami has yet to hit its one-million-visitor mark – a goal it strived for this year – last month was the best May in zoo history.

Some 65,600 visitors were expected in May, but more than 72,000 showed up, said Communications Director Ron Magill. The zoo welcomed about 44,000 more visitors this past December, January and February, which are its peak months, than it did in the same months last year.

“We actually surprised ourselves,” Mr. Magill said. “We had expected some increase in attendance, but not the increase we’ve seen.”

The zoo has two projects under construction, including the Florida: Mission Everglades exhibit and a new entrance, costing the zoo about $50 million. The entrance is to be completed in December and open during the first quarter of 2016, Mr. Magill said. The Florida exhibit is scheduled for completion mid- to late-2016, with hopes of debuting that winter.

Because two construction projects are underway, the zoo had predicted a slow season.

However, a string of beautiful days and a popular dinosaur exhibit attracted more visitors than expected, Mr. Magill said. The exhibit did so well, in fact, that the zoo extended its stay to July 5.

Current visitor projections for this fiscal year (October to October) are 925,000.

“I’m telling you right now, we’re going to exceed those projections because, for instance, we had the highest May in the history of the zoo,” Mr. Magill said.

The zoo is finally coming back into its own, said Rolando Aedo, senior VP of marketing and tourism for the Greater Miami Convention & Visitors Bureau.

Miami Zoo was awarded with a Certificate of Excellence for the fifth consecutive year, and inducted into TripAdvisor’s Hall of Fame this month.

New amenities like the Safari Cycle, which can accommodate up to six adults and two small children, are attracting more visitors. Mr. Aedo said the zoo is one of the bureau’s top attractions and he sees it becoming a major platform for southern Miami-Dade tourism.

Mr. Aedo said the zoo might play a role in the county’s ongoing transportation discussion. He sees the zoo as a potential transportation hub for that end of the county, noting current limitations in connecting visitors from Miami’s urban core to the zoo.

So far Zoo Miami has developed 330 acres of its 740-acre property. Once the new projects come online, an additional 20 acres will be developed, Mr. Magill said.

He said the zoo is working with the county and the Parks, Recreation and Open Spaces Department on “different master plan concepts” to further develop more acreage, including possible plans for an Australian and a Caribbean exhibit expected “several years down the line.”