Advertisement
The Newspaper for the Future of Miami
Connect with us:
Front Page » Transportation » Design wins support for new bridge 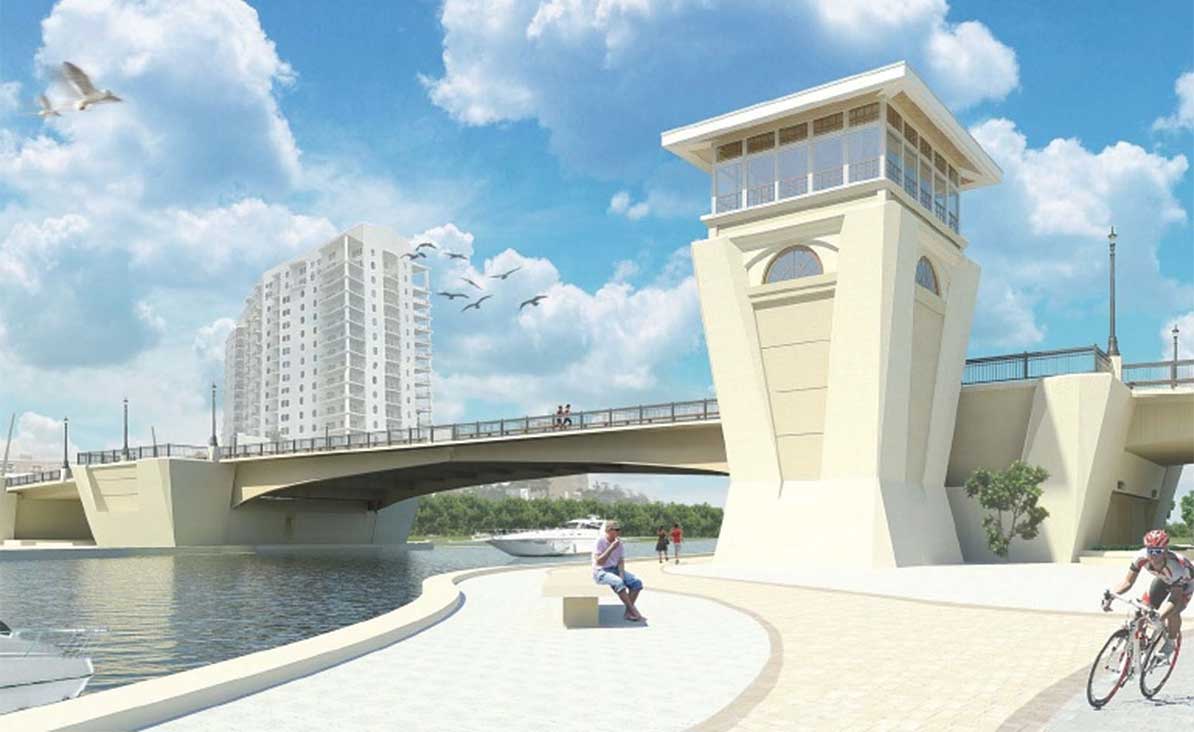 It never hurts to ask for more.

That may be the lesson to come out of talks between Miami River advocates and design engineers hired by the Florida Department of Transportation for replacement of the Southwest First Street Bridge.

Persistence has led to a larger public walkway on the river.

Early plans to replace the aging drawbridge included no public walkway on the river’s edge. The Miami River Greenway Action Plan calls for an improved public riverwalk on both banks of the river.

Reminded by river advocates of the growing riverwalk, the design engineers came back in May and reported that $5 million has been added to the replacement project to construct a public riverwalk.

Members of the Miami River Commission’s Urban Infill and Greenways Subcommittee were happy to see plans for the riverwalk, but expressed concerns that it would be too narrow in some spots. The plan showed the walkway as narrow as 6 feet in places.

Design engineers considered the request and reworked the plan again to see how far they could go in a wider riverwalk.

When the design team met with the full river commission in June, the plan showed an expanded riverwalk, which at its narrowest point would be about 10 feet wide.

The Southwest First Street Bridge carries eastbound traffic into the heart of downtown. The 86-year-old bascule bridge rises and opens to permit water traffic to pass.

More than 8,500 cars a day traverse the span, owned and operated by the state. But the bridge is considered structurally deficient.

“It’s safe to travel upon but reaching its limits,” said Michael Sileno, from the infrastructure engineering firm Hardesty & Hanover, hired by the state for the bridge replacement.

Mr. Sileno is with the design team that’s been meeting with local officials as the project progresses.

Mr. Sileno presented a PowerPoint on the status of the project and explained some challenges posed by the endeavor.

After his presentation, the river commission voted to support the project, with five conditions: a riverwalk as wide as what Miami 21 calls for (a standard minimum 25-foot-wide riverwalk featuring a minimum 15-foot-wide unobstructed pathway); signage directing motorists and pedestrians to the riverwalk; artwork associated with the project to be top of the line (porcelain enamel); mechanical equipment used to open the bridge be state of the art to open and close as fast as possible; and the architectural design to be the Hybrid Control House Alternative 1.

“You’ve accommodated some of our concerns,” said commission member Dr. Ernie Martin, who then asked if cantilevers could be built over the water to widen the riverwalk.

Mr. Sileno said engineers would look into it, but it might not be possible because the US Army Corps of Engineers requires a certain width for the navigable federal waterway.

Although commission members seek a wider riverwalk, there are many constraints to the bridge replacement, riverwalk and the new roadway on Southwest First Street.

The width of the river itself is one factor, said engineers. Two other major factors are that North River Drive and South River Drive hug both sides of the river, and an elevated I-95 with several associated ramps is close by.

Mr. Sileno described the interstate as “a big constraint,” noting that the project includes rebuilding a stretch of Southwest First Street from Southwest Sixth Avenue under I-95 to Southwest Second Avenue.

Complicating the project is that county, state and federal layers of government are involved in the approval process for the replacement. Roadway and waterway officials also are involved.

So many pieces of the puzzle are crammed tightly into a small area, and one item impacts all the others, Mr. Sileno explained.

He mentioned that if the northern pier supporting the new span were moved any closer to North River Drive than in the current layout, it would trigger other regulatory and safety measures and require guardrails along portions of the road, interrupting a plan for a cohesive greenway (the road) and riverwalk.

Through the Project Development & Environment phase, the state transportation department determined it would:

•Ensure that design is compatible with the historic and architectural qualities of the National Register-listed South River Drive Historic District.

•Be responsible for Florida historic markers through the Florida Division of Historical Resources Marker Program.

•Prepare a brief multimedia DVD as an educational tool for local schools, HistoryMiami, the Florida Room of the Miami-Dade County Main Library and interested agencies.

•Perform archaeological monitoring during bridge replacement and for any ground-disturbing road reconstruction.

The project will reduce the current four lanes of traffic on the bridge to three and add a 5-foot 5-inch wide dedicated bike lane.

Mr. Sileno said the three vehicle lanes would match the three on Southwest First Street near Sixth and Second avenues.

He said the new bridge will have open railings that afford views of the river.