Advertisement
The Newspaper for the Future of Miami
Connect with us:
Front Page » Transportation » No consensus on next big transit move

No consensus on next big transit move 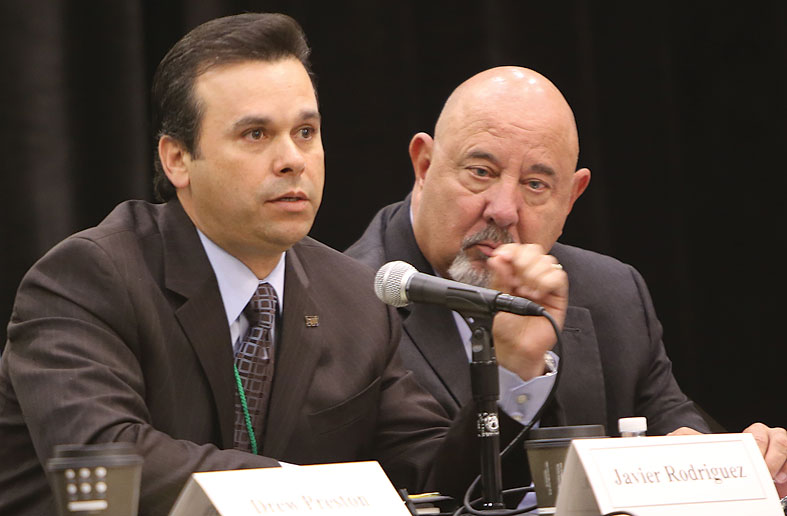 Everyone acknowledges that something must be done to address South Florida’s growing transportation gridlock, but there is very little consensus on next moves.

“There’s no appetite to go to the voters and ask for more money,” said Esteban Bovo Jr., a Miami-Dade County commissioner who was a panelist at a critical issues panel on funding transportation priorities, part of the Greater Miami Chamber of Commerce’s annual goals conference.

“The residents have been very clear. They say ‘We’ve given you money, and you guys have blown it.’ The county commission is very invested in this; every conversation turns into a transportation discussion.”

The demand on county roads has been exacerbated by a decision by the Miami-Dade Expressway Authority (MDX) to install toll-taking lasers on gantries along the entire length of its five expressways. Prior to that, drivers could exit at strategic points to avoid tolls.

“Today, we are pricing our product,” said Javier Rodiguez, MDX executive director. Because of the space between toll plazas, previously only 25% of drivers paid a toll, he said. Despite a public outcry, usage is up, he added. Traffic on the expressway today is 3% higher than the day before tolls were raised last year, he said.

“The reality is, we have a car culture,” Mr. Bovo said, and residents in the outlying areas can find themselves paying as much as $20 per day in tolls. “Our conversations with our state and federal representatives have not been good.”

Don’t expect much help from the federal government, said Drew Preston, director of congressional and public affairs for the US Chamber of Commerce. In fact, Congress looks to Florida and other “city-states” that are doing well to justify the argument that federal help is not needed. “There are a lot of people in Washington now who are looking to get out of the business of paying for anything,” he said.

“It’s not a lack of money; it’s a lack of trust,” he explained. “It’s understandable, and it permeates all levels of government,” given Washington’s stalemate over recent years.

“Congress has no problems spending money when it wants to. What’s missing is the political courage and willpower,” especially to raise the federal gasoline tax, Mr. Preston said. “They’re looking for signals from the electorate that it’s okay to invest in infrastructure.”

That might be a long-term solution, he said, “But in the near term, I’m not optimistic. Florida is well-positioned to absorb a scale-back in federal dollars, but you’d better start planning to do [transportation improvements] yourselves.”

But rallying Washington to the cause “is our role,” said Ric Katz, president and founder of Communikatz and former chair of the chamber’s transportation committee. “Congress is responsive to the business world.”

Mr. Katz conceded, however, that federal money comes with expensive strings. He has been involved for several years in the Tri-Rail East Coast Corridor project, which has been delayed by federal environmental studies and other time-consuming requirements.

Panel moderator Tom Hudson, vice president of news and special correspondent for WLRN, said a tourism tax has been suggested.

“They flush our toilets, they use our streets. Why not use that tax for infrastructure improvements?” Mr. Hudson asked.

He agreed with Mr. Bovo that “residents are starving for results. They never got what they were promised” from a 2004 half-penny sales tax increase.

An added tax for transportation could sunset, or end, after 10 years, Mr. Bovo suggested. It could pay for things like bus rapid transit, which removes buses from traffic and places them on a rail-like system with limited stops. “We are dotted with rail lines all over the place,” he said. “If the residents don’t see some sort of movement, they will move on.”

“I’ve always supported all types of funding for transportation,” Mr. Rodriguez said. “We’re looking at opportunities along rail lines. We’re not opposed to rail at all; the future is not on the highways.”

Instead of looking for outside money, he suggested transportation impact fees, similar to the fees developers are required to pay when they build large projects. “The only way we’re going to do this is locally; if we look to the federal government, we’ll fail.”

“We’re looking for a game-changer,” said Jack Stephens, executive director of the South Florida Regional Transportation Authority, which steers the Tri-Rail East Coast Corridor project. “Everybody wants it, but nobody wants to pay for it.”

“There are solutions, and there is funding for solutions,” said Charles Scurr, executive director of the Citizens Independent Transportation Trust, “but it’s going to take all of our efforts to move the dial.”

2 Responses to No consensus on next big transit move