Advertisement
The Newspaper for the Future of Miami
Connect with us:
Front Page » Real Estate » Four 60-story riverfront towers move ahead 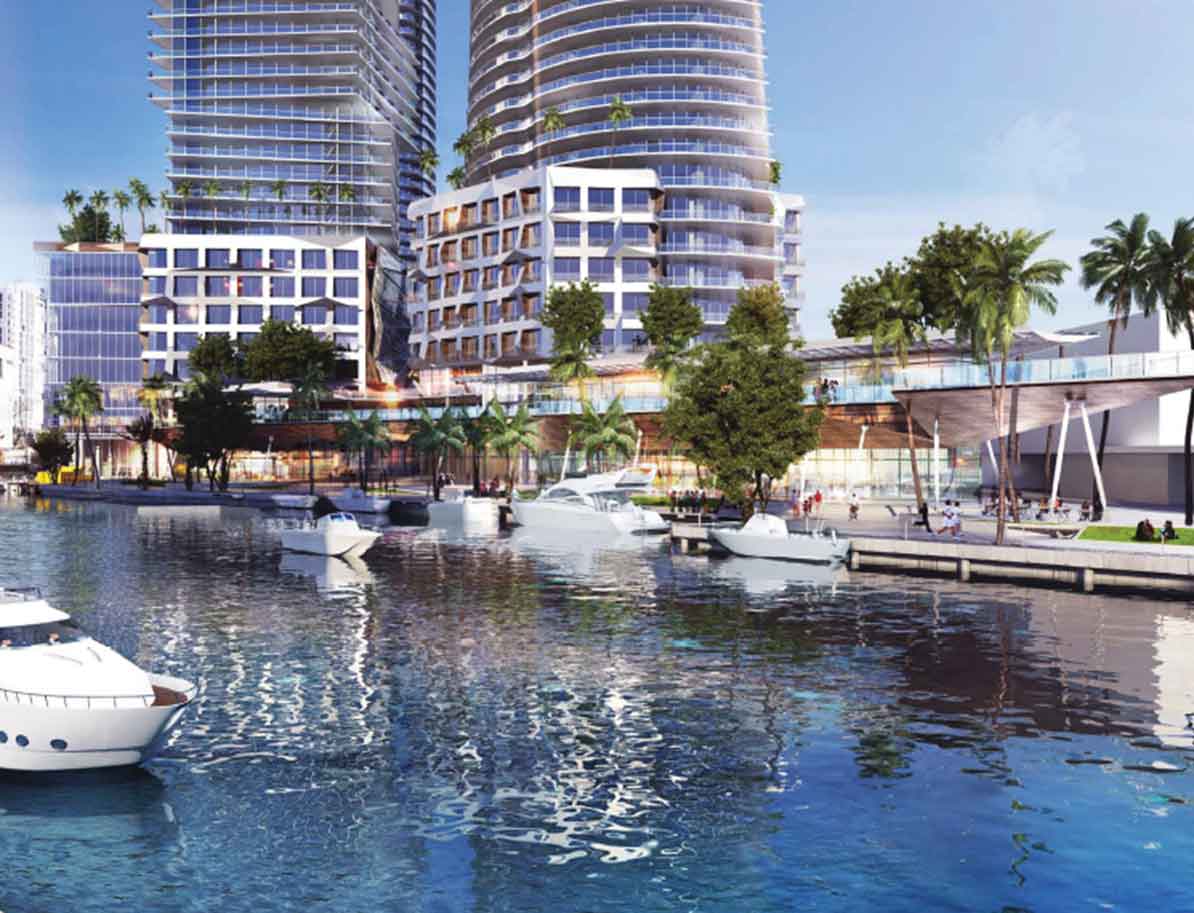 A large project planned for riverfront property adjacent to I-95 would bring more than 1,600 residential units to Miami.

These new residences would make up the bulk of four 60-story towers, the heart of a mixed-use development named after the body of water it embraces: Miami River.

Along with its size – it is to be built in five phases – this project stands out because the City of Miami is a partner.

As part of a proposed Special Area Plan under the Miami 21 zoning code, Jose Marti Park would become a part of Miami River.

What it means is an extension of the public riverwalk westerly and under I-95, and improvements to the city park. A deal struck with the developer, CG Miami River LLC, also ensures the public riverwalk will be extended east under the Second Avenue Bridge and past neighboring condo tower Latitude on the River.

At completion of all five phases, Miami River would include about 1,678 residential units, 330 hotel rooms, retail and office space, a riverfront restaurant, a new seawall with about 19 boat slips, and a public landscaped riverwalk the full length of the property.

The plan calls for one-, two- and three-bedroom units.

Melissa Tapanes Llahues, an attorney representing the developer, said the project is designed to “celebrate” the river, as a natural resource and economic engine.

She told the review board this public-private partnership will transform the area with a pedestrian-focused project that will “connect to the energy of downtown.”

The partnership would mix about 6.2 acres of private land with about 4 acres of park property.

Ms. Tapanes Llahues said the development will result in significant improvements to I-95, Southwest Seventh Street and Southwest Third Avenue.

Architect Kobi Karp described some of the concepts behind the project. He said they took inspiration from the river to create an urban fabric, and “we want to make the river our front yard.”

Miami River will offer numerous access points to the riverfront, he said, along with adding a new stretch of riverwalk that will connect the site to Brickell and beyond.

Circulation for pedestrians will include many ground-level walkways and sidewalks, and bridges will connect the four towers, Mr. Karp said.

He said the developer plans to be ready to submit all phases to city planners within six months.

Board members praised the emphasis on a pedestrian-friendly streetscape.

One board member did take exception to changes planned for Jose Marti Park.

Gerald C. Marston said that past work done in the park was the result of a design competition years ago, and the park facilities were to reflect traditional Cuban architecture.

Investing development dollars in public improvements is a wonderful thing, he said, but to make changes at the park would be a mistake.

“I’m disappointed the city is encouraging that,” Mr. Marston said. “It should be its own entity, not part of your streetscape,” he told the developer.

A representative for the developer said the park is a bit of a shambles due to lack of attention over the years, and the planned improvements “are being very much directed by city staff.”

Plans also call for added security and policing at the park.

Ms. Tapanes Llahues said the city’s parks advisory board is also involved in the renovation planned for the park.

Mr. Karp said original designs will be incorporated into improvements at the park, and the developer will be sensitive to the park’s historical significance.

Some board members like the phasing. “The approach is solid and I like it,” said Jesus A. Permuy.

Board member Dean Lewis complimented the developer on a “great achievement,” saying that gathering together eight parcels and connecting to the park is “commendable.”

Board member Fidel Perez tried unsuccessfully to advance a plan that removed a three-story triangular structure close to I-95 to create a larger open space.

Ms. Tapanes Llahues said the developer believes that structure to be very significant to the project as it will house retail uses, entertainment and restaurants.

The recommended approval from the review board has conditions, including that the developer must submit a traffic study and that final design plans for improvements to the park must be brought before the board.

In consideration for increased density and other items, the developer plans more than $21 million in improvements or cash payments as a public benefit portion of the project. Those improvements could be work on the park and riverwalk.

Current zoning of the site limits density to 200 residential units per acre, which would allow a little more than 800 units.

To get the added density, the developer is seeking a Special Area Plan, which is in effect a rezoning.

The purpose of a Special Area Plan is to allow parcels greater than 9 abutting acres to be master planned to allow greater integration of public and private improvements and infrastructure.

In order to make the 9 acre minimum, the developer and city plan a public-private partnership that includes a portion of the adjacent park.

In October, the Miami River Commission reviewed the proposal and approved a motion urging the city commission to approve the Special Area Plan with three conditions: make certain that the more than $21 million in public benefit results in improvements within the river district; the developer agrees to build and improve the public riverwalk east under the Second Avenue Bridge if Latitude on the River fails to do so; and the developer, as part of phase I, commits $5.5 million to be held in trust to ensure construction of the riverwalk if the riverfront phase II is not constructed.

Special Area Plans require the approval of the city commission, yet to occur for this project.