Advertisement
The Newspaper for the Future of Miami
Connect with us:
Front Page » Transportation » 86-year-old bridge to be replaced

86-year-old bridge to be replaced 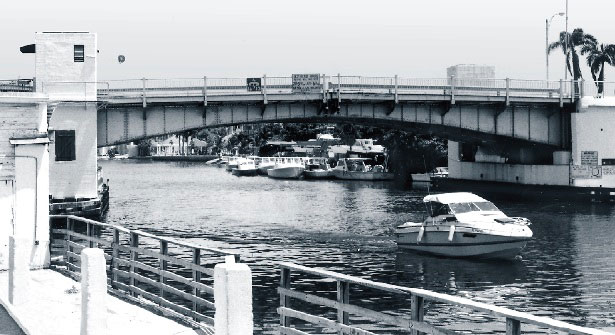 An 86-year-old drawbridge over the Miami River is due for a redo.

The Southwest First Street Bridge carries eastbound traffic into the heart of downtown. The bascule bridge rises and opens to permit water traffic to pass.

More than 8,500 cars a day traverse the span, owned and operated by the Florida Department of Transportation. But the bridge is considered structurally deficient.

State officials have been meeting with Miami officials on the fate of the bridge, which is scheduled for replacement.

Most recently, the status of the transportation department’s plans were discussed May 18 by the Urban Infill and Greenways Subcommittee of the Miami River Commission.

River commission officials learned that the state is through the Project Development & Environment phase and on to preliminary engineering.

Original plans called for the public riverwalk under the new bridge to be not at the river’s edge – the location the river commission prefers – but away from the water and along South River Drive and North River Drive.

Subcommittee members were generally happy to learn the current plan shows the riverwalk on the water’s edge.

Co-chair Jim Murley said the new design sounded good but he wanted more details. No renderings were presented at the meeting.

Some concern was expressed because the state’s planned riverwalk is very narrow in spots and somewhat secluded from the street.

The state may also be considering reducing driving lanes on the new bridge from the present four to three, and perhaps adding a bike lane.

Those matters are expected to be discussed when a transportation department representative meets with the river commission June 1.

Mr. Murley is also pushing for public art or large murals under the new bridge.

The bridge is one of several bascule bridges on the Miami River.

The book “Historical Highway Bridges of Florida” says after a successful $2.15 million bond election in 1926, Miami made plans to construct five bridges over the river to facilitate expansion to the south and west of downtown.

“As a navigable waterway, often crowded in those days with vessels hauling supplies into the city, the river required movable spans,” reads the book, published in 2004 by the transportation department’s Environmental Management Office.

The drawbridges on the river – and more directly, the openings of those bridges for water traffic – have been a hot topic in recent years as traffic gridlock in Miami worsens.

The traffic back-ups associated with the opening of the Brickell Avenue Bridge have caused radiators to overheat and tempers to flame.

The added congestion that results from opening that bridge has led to a renewed call to bore a tunnel under the river so vehicular traffic on Brickell Avenue can move unimpeded.

One Response to 86-year-old bridge to be replaced