Advertisement
The Newspaper for the Future of Miami
Connect with us:
Front Page » Transportation » Bridge lanes, openings frustrate drivers

Written by Catherine Lackner on May 19, 2015
Advertisement 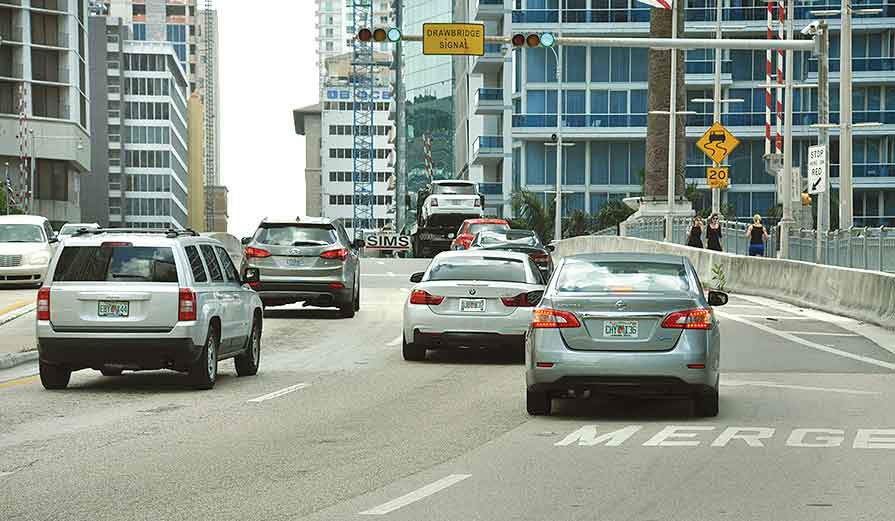 Directors of Miami’s Downtown Development Authority last September expressed frustration that, in defiance of an agreement hammered out years ago, bridges that serve downtown are being opened during times when they should remain locked down to let cars pass.

Friday, the authority learned the problem is even worse than previously thought.

“Last time I appeared here, we had only a small sample of bridge openings,” said Alex Tirado-Luciano, an associate in the Lydecker-Diaz law firm, which offered to study the matter pro bono. He and Alan S. Feldman delivered in a preliminary report in September.

“When we started this, I said one violation was too many, but violations are pretty extensive,” Mr. Tirado-Luciano said last week. On weekdays between Jan. 1, 2014, and Feb. 28, 2015, a device attached to the Brickell Avenue Bridge recorded 3,218 openings, 682 of which were during restricted hours, he said. While only 38 were clear violations, another 337 were within 15 minutes of the restricted times, and in 74 instances, the bridge was drawn up during unrestricted times but remained open into the times when it should have been locked down.

Marine interests along the Miami River have said that enforcing strict fixed-bridge hours will hurt commerce, yet only 18% of the bridge openings allowed cargo vessels to pass, Mr. Tirado-Luciano said.

Another 21% were for tugs and 6% for barges, while pleasure craft accounted for 45%, according to a chart he gave to directors. Cargo ships and tugs are exempted from the restrictions, in any case, and removing the exemption for them is not recommended, he said.

“The time is now to advise the Coast Guard,” Mr. Tirado-Luciano said. A new commander, Rear Admiral Scott Buschman, began April 30, he added. “He is brand new, and what better way to welcome him than to show him the violations on his watch?”

Traffic snarled because of bridge openings costs the local economy $12 million each year in lost productivity, he said. The logjam can involve as many as 26,000 vehicles that can produce 246 metric tons of carbon dioxide emissions while they idle, said Nicholas Martinez, researcher for the downtown authority.

“The Coast Guard should evaluate this again. We should show the new commander the data and get him on our side,” Mr. Tirado-Luciano said. While he would not rule out litigation – which was suggested last fall when the debate began – he said it is “at the end of the spectrum.”

Complaints about Brickell Avenue traffic being congested by limitations of the Brickell Avenue Bridge and exacerbated by its openings are decades old, but have mounted as population and construction increases have put more vehicles on the roadways.

Other interests have another suggestion for reducing traffic congestion that centers on the Brickell Avenue Bridge – a solution that deals not with bridge openings but rather would open more lanes of the bridge for vehicles to reduce traffic jams.

Miami River Commission Chairman Horacio Stuart Aguirre last week wrote to the Miami City Commission asking that it request the Florida Department of Transportation to reopen a northbound traffic lane that the state had closed in an effort to ease traffic problems near the bridge in downtown.

“The new need for drivers to merge from three lanes down to only two northbound vehicular lanes while driving on top of the Brickell Bridge clearly makes the vehicular backup longer and takes more time to restore average traffic flow after a federally regulated bridge opening,” Mr. Aguirre wrote to the city commission.

“Please note the problem with this ‘trial’ reduction of a vehicular travel lane directly on the Brickell Bridge has been confirmed by me and multiple other witnesses who live and work in this immediate area,” Florida Rep. Jose Felix Diaz wrote the same day to Gus Pego, secretary of the Florida Department of Transportation District 6, which has charge of traffic decisions on the bridge.

The Miami River Commission has been seeking the lane restoration at least since August 2013, when it wrote directly to Mr. Pego seeking the change.