Advertisement
The Newspaper for the Future of Miami
Connect with us:
Front Page » Real Estate » 60-story towers due on river

60-story towers due on river 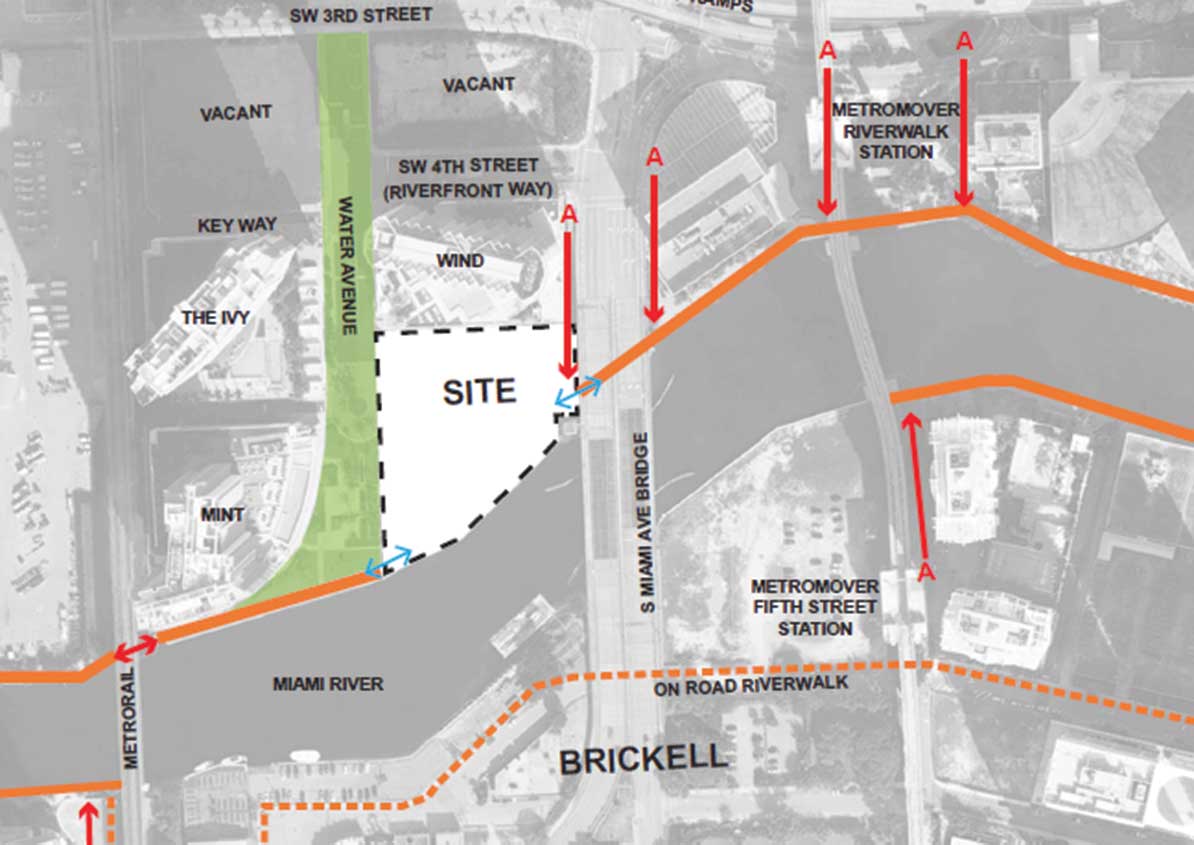 Dual 60-story towers planned for the north bank of the Miami River are to include residential units and exclusive hotel rooms.

The towers would connect at the top and bottom and be open in the middle.

Plans calls for about 400 residential units, including two 5,182-square-foot penthouses that each have a terrace and pool.

The city’s Urban Development Review Board recommended approval of the project April 15.

The project site is a familiar one, right next to the South Miami Avenue Bridge.

The vacant parcel is hugged by three condo towers that rose during the last building boom: The Ivy, Wind and Mint.

Along with the hundreds of new condos, the 56th floor will be home to 20 lodging units, 10 in each building.

The 57th floor is set aside for nearly 30,000 square feet of commercial space.

At Level 5 is the shared amenity deck designed to include a large plunge pool, a lap pool and cabanas, a 6,979-square-foot fitness center, 1,321-square-foot child play area, 5,658-square-foot spa and 2,965-square-foot café/kitchen.

Parking levels that are the bulk of the podium at Levels 1-4 will have an automated mechanical lift and space for about 520 vehicles.

The vacant site is bordered on the north by the Wind tower, on the east by the bridge, on the south by the river and on the west by Water Avenue.

An earlier project planned for the site included one bulkier residential tower, while the new proposal includes two slender towers joined in an L-shape by a podium about five stories high, according to Iris Escarra, an attorney for the developer.

The original tower approved for the site was designed with 507 residential units and a parking garage for 545 vehicles.

She said all loading to the new development will be covered and “internal to the site.”

Right next to the bridge, the developer plans a covered area for bicycles as part of an expanded public riverwalk.

The riverwalk is designed much deeper than the required 50-foot setback, creating a public plaza between the river and the front of the dual towers. At one section the proposed riverwalk is 69 feet, and at its deepest it is 77 feet, said Ms. Escarra.

One of the more prominent aspects of the design is a pool that spills over into a large waterfall on the front of the development, facing the river and public riverwalk.

Mr. Vinoly called the site prominent and extraordinary. He mentioned the existing towers, saying “my eye saw a series of buildings unrelated to each other.”

He spoke of the “dilemma” in designing the new project so as to “break the massing into filtering light and views.”

That’s when he came up with the “open book arrangement,” two very slender towers open in the center, he said.

The top of the towers will have a series of gardens and wide terraces. To get there, each tower will have a glass cylinder elevator, “making the journey to the top an attraction for the public,” said Mr. Vinoly.

He said he sought to create “the experience of the ocean” inland with the waterfall feature.

It’s not unlike Niagara Falls, he told the board. “It is literally a wall of water,” he said.

The planned lush landscaping along the riverwalk will be reflected in the water curtain, said Mr. Vinoly, and a large reflecting pool will receive the water.

The waterfall will serve to filter the light and cool the surroundings at the front of the podium for the dual towers, he said.

The towers themselves will be built with “simple, noble, sturdy materials,” Mr. Vinoly said.

Board member Fidel Perez called the overall project “impressive” but had questions regarding the robotic parking.

A representative of the parking company said the fully redundant system will use four lifts, each independent of the other. There should be no need to shut down the entire system if there becomes an issue with one of the lifts, he said.

Discussion of adding more residential towers in the heart of the city on the river led board member Neil Hall to express a regret that so many new tower residents don’t mingle.

Looking up at all the towers in the urban space, Mr. Hall said he doesn’t see enough interaction.

“Now, we are sequestered,” he said.

Mr. Hall said it was wonderful to see a project that plans to seriously activate the riverfront and work to get the tower occupants “down to participate.”

Mr. Hall said he wants to see projects that will “encourage activities on the waterfront.”

Board member Anthony E. Tzamtzis said he’d like a less imposing riverwalk with smaller trees. He suggested more seating and landscaping of a more “human scale,” and more romantic.

Something is lost by the imposing large scale, Mr. Tzamtzis said.

Looking over renderings of the large royal palms, Mr. Vinoly said he agreed.

“This is a remarkable project,” added Mr. Tzamtzis.

Board member Jesus A. Permuy said he’d like more space between the two towers and more landscaping for the riverwalk.

Mr. Karmely addressed the board and said he feels privileged to be in Miami. He said he fell in love with the city, and that he is “absolutely fascinated” by the new urban core that is developing.

“The river should be the heart of the city,” he said.

“Urban areas have to be activated … look at all the great riverfronts,” he said.

Mr. Karmely said he’s happy to share in the enthusiasm about the city’s bright future and “we hope to be a part of Miami’s fabric.”

Mr. Perez noted this was one of two major developments planned for the Downtown and Brickell areas on the board’s April agenda, and he voiced concerns about the impact these projects would have on traffic.

Thousands of new residential units are being built in such a concentrated area, said Mr. Perez, and “I feel very strongly, we need some sort of answer from the city: how are we going to handle this?”

Mr. Perez was joined by Mr. Lewis is asking that Mr. Cruz-Casas come back before the board soon to update traffic management efforts.

The plan for the dual towers is to be reviewed by the Miami River Commission on May 4.

3 Responses to 60-story towers due on river