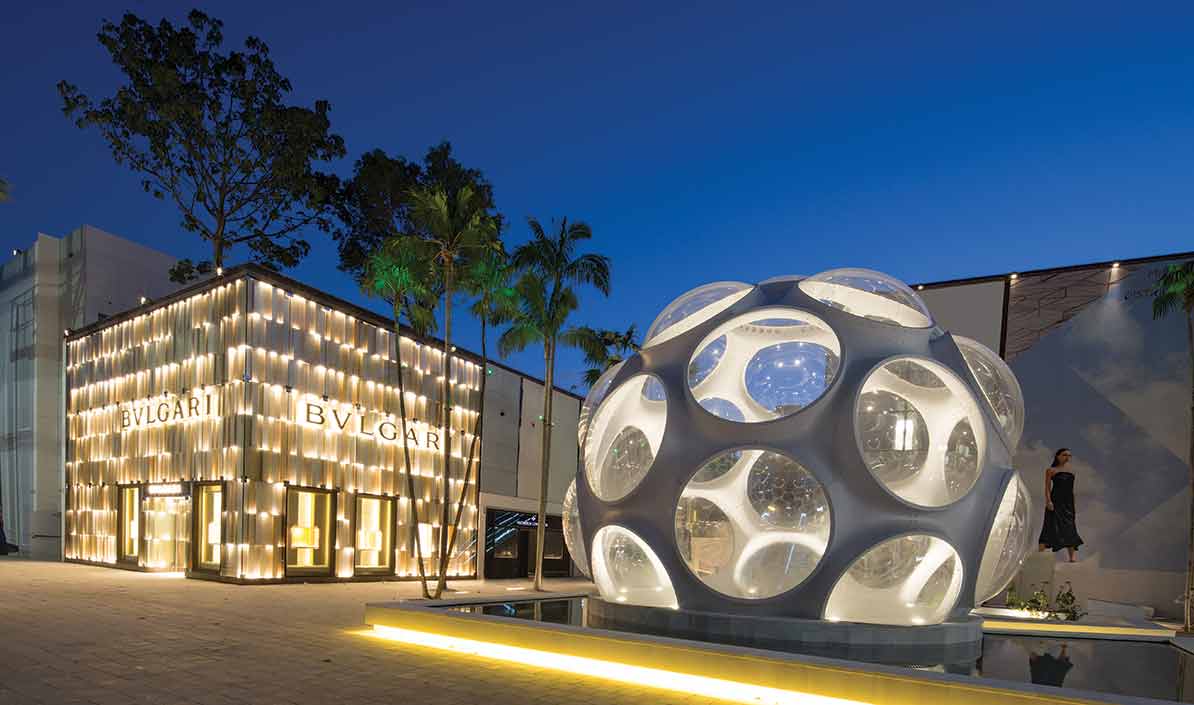 The developers have set out to create a destination mall to better its peers. “My hope is that, if there is one place you have to go in Miami, this will be it,” said Craig Robins, Dacra CEO and founder.

At buildout, the $2 billion mixed-use development will boast 1.1 million square feet of retail, a hotel, low-rise residential units, restaurants and four garages. It’s set on a four-block parcel on Northeast First Avenue from Northeast 38th to 42nd streets, and is planned around a landscaped pedestrian promenade.

Many of the high-ticket retailers have abandoned their Bal Harbour spaces and have chosen the Design District as their only Miami location. Some, including Prada and Armani, have chosen to maintain stores in both centers.

With phases I and II leased, except for one space “in case somebody great comes along,” Mr. Robins said, Dacra is now focusing on leasing phase III, which is mainly on Northeast 40th and 41st streets. “We did a major renovation on 39th Street,” Mr. Robins said, installing about 300 30-year-old native trees to create a welcoming space. “We’ve created roof gardens.”

Many of the stores moving in have created two- and three-story flagships that are noteworthy in their design, he added.

Case in point: Helmut Lang and Theory have signed a lease for 5,000 square feet at 101 NE 40th St. The two-story building features high ceilings and the purveyors of luxury goods will get to design their own façade.

“The needs and wants of the retailer and consumer have both changed,” said Tony Arellano, executive vice president of Metro 1 Properties, speaking about Miami Design District last fall. “Tom Ford, Theory, Helmut Lang, Ferragamo – these are brands you can buy at Saks. They have instead chosen to create their own flagships. It’s an ode to the brand.”

As the shopping destination grows, so will the demand for restaurants. “There are 16 new restaurants in the neighborhood, wonderful ones,” Mr. Robins said. Dacra, he said, is in discussion with chef-owner Jean-Georges Vongerichten to open a restaurant there. In the neighborhood are MC Kitchen, A Crumb on Parchment, Mandolin, Michael’s Genuine Food and Drink, Oak Tavern, Harry’s Pizzeria, The Cypress Room and others.

The Institute of Contemporary Art, which moved to the neighborhood in December, and the long-established Design and Architecture Senior High demonstrate the area’s ties to art and design.

“This district has years and years of history in furniture design, galleries and other forms of art,” Mr. Robins said. He said he hopes the new enclave will be a draw to visitors who have never experienced this side of a Miami neighborhood that was largely forgotten as development moved west to the suburbs.

“Everybody is welcome; parking in the garages is $3,” Mr. Robins said. “It’s an asset to our community and it belongs to all of us. That’s one of the really nice things that we can share.”